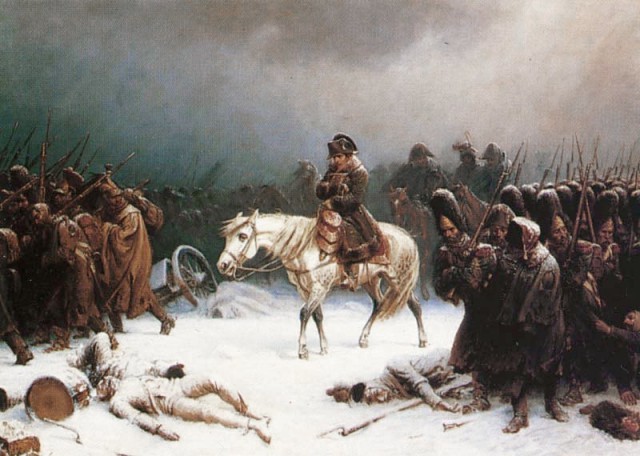 The Emperor of the French Empire and one of the most controversial figureheads of the modern European history, Napoleon was ambitious and ruthless hence he operated on the fringes of fate (if anything like that exists). He was known to refer to his power in terms of number of soldiers he could afford to lose in a month, a complete mind-bender for most of the leaders of 19th century.

Just like many other ruler Napoleon was pushing his luck a bit too much to the edge and his hunger for expansion and absolute rule eventually brought him to his knees. Historians argue that Napoleon’s downfall started with his ill-prepared march over Moscow in 1812.

Napoleon was no doubt a cunning strategist and very clever general but the massive Napoleonic force and its mythical fear in the hearts of the enemy made him complacent over time. He started overlooking certain critical aspects of his troops and made monumental errors. Napoleon Marched on Moscow with a massive force of roughly 500,000 troops in June of 1812. He was anticipating a literal walk over, but things did not quite went according to his plan and he had to retreat back to Europe within six months in a blistering cold. By the time Napoleonic forces reached the borders of the French empire, they were reduced to a mere 40,000 sick and diseased troops. A massive chunk of Napoleon’s Army was lost in the campaign, The Independent reports.

Historians had always been divided on the fact that whether the French troops perished in the battle or were killed by the harsh weather and lack of food. As it turned out most of the Napoleonic highly skilled Army fell prey to disease, starvation and cold while retreating back to France.

First evidence that pointed towards this fact came to light in 2002, when it was discovered that when French Army started its retreat from Lithuanian capital Vilnius, it consisted of more than 40 different regiments.

Recent archaeological findings in the area clearly suggest that a large number of troops perished not as a result of the direct combat, but due to the harsh conditions they had to face while retreating. Some Historians suggest that this campaign actually triggered the eventual demise of Napoleon who met his end in the Battle of Waterloo just a couple of years later in 1815. Napoleon was later captured by the British and imprisoned till his death.