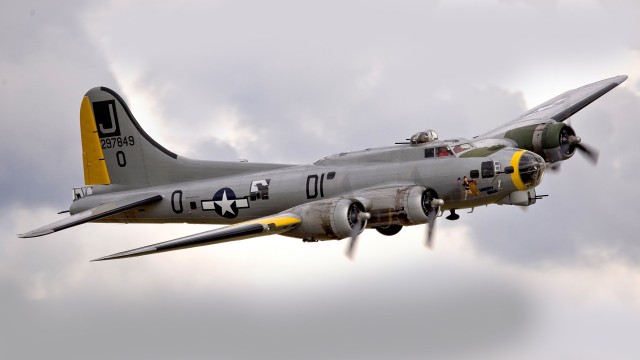 Film producer and director, Darla Rae can’t believe her luck. Darla is making a movie called The French American and has gotten her hands on an airworthy Second World War B-17. The B-17 was the four-engine ‘flying fortress’ heavy bomber that acquired mythical status as the aircraft that got its crew home, even when it had sustained extensive battle damage.

Darla’s film tells the story of John Tschirhart, who was a B-17 bombardier back in 1943.

John was born in Texas in 1920 and by 1940 he was living in France. Aged 20, John was deeply in love with a beautiful girl called Malou. In May of 1940 the Germans invaded France and the young couple fled to Paris, thinking they would be safe. However, it became obvious that German troops would soon occupy the city and John would be in danger. As an American, he was likely to be arrested and sent to a German Prison camp.  Deeply distressed, John parted from Malou and eventually found his way back to America where he joined the US Air Corps, qualifying as a bombardier.

Sent to England to join the 305th Bombardment Group, John was soon flying bombing missions over Nazi-occupied France. He had not stopped thinking about Malou and determined to find her if he possibly could. Whenever his aircraft’s route took him near Malou’s hometown he dropped messages written on parachutes made from handkerchiefs, in the hope that someone would find one and get news to him about his sweetheart. He received no response.

The story so far is poignant, but it doesn’t end there.

By 1944, John was a highly decorated Army intelligence officer. He took part in the D-Day landings on the Normandy beaches, and several days later he resolved to make a final attempt to find Malou. He heard a rumor that she was working with the French resistance, and despite the dangers he decided to make his way to Paris, the KDVR.com reports.

Now aged 94 John spent years writing a script and a screenplay about his quest to be reunited with Malou. When Darla Rae’s film premiers in November 2016 he will finally see his story portrayed on the big screen.