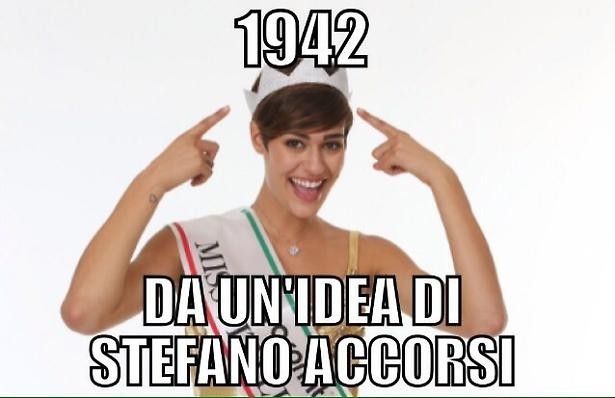 In this age of gifs and snippet information it is very hard to express a desire or an opinion without facing excruciating process of scrutiny and 3rd degree. This becomes more apparent in case of celebrities primarily because they already have the spotlight and masses are hungry to fetch on whatever they throw out there.

In Italy there is a surge of memes and satires focused on a comment made by the winner of Miss Italy competition Ms. Alice Sabatini. During the final stages of the competition when judges asked her a strange and somewhat unexpected question, her reply sent a wave of shock and awe throughout Italy and Europe. One of the judges casually asked Ms. Sabatini in what era she would love to have lived, to which she replied that her preference would be 1942. You may have guessed the reason behind all the hoo-ha; 1942 was the worse year for the Europe since Second World War started.

After her comment went viral on the web, every ‘online intellectual’ thought this a moral duty to mime and ridicule Ms. Sibatini’s preference in every disrespectful way possible. When Miss Italia was asked about the reason of her choice she elaborated on it by commenting that she would not have to do much during that time since only men were going to war and women were staying home fearing for… she stopped after that and gave a light giggle, an indication that she would not like to go any further, The Telegraph reports.

During the Second World War, Italy lead by the ruthless dictator Mussolini, sided with the Third Reich. Scores of Italians died for Mililani’s cause, mostly in the North African theatre of the war. There is a consensus among the Italian historians and academics that the time around 1942 in general and the whole Second World War was the worse period in the modern Italian history. In light of all this, it must not come as a surprise to anyone when Italians took Ms. Sabatini’s choice in a somewhat offensive way.

One of the Judges for the competition half-heartedly defended Sabatini but not her comment. Actress and Politician Vladimir Luxuria commented that Sibatini’s young age and intensity of the spotlight coupled with the pressure to win the competition made her nervous. In her own defense Ms. Alice Sabatini said that she was definitely nervous and panicked, but her comment was justified. She cited the memories of her grandmother who had lived through the Second World War and played the role of a model hero in Sibatini’s life. She said in an interview that her comment was an acknowledgement for her grandmother’s bravery and determination during one of the toughest periods of the modern European history.