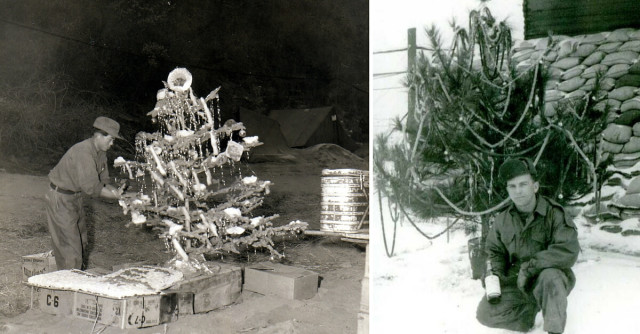 A decade ago, Army Pfc. Norman Deptula sat in his warm home in Webster, Massachusetts and wrote the remarkable story of a Christmas miracle that occurred in 1950.

Deptula was serving with the United Nations Forces in South Korea during the campaign that was well underway in October of 1950. They were working their way up the Korean peninsula and slowly clearing the North Korean forces out when the Chinese entered the war throwing 300,000 men over the Yalu River.

It was a bitterly cold winter and the influx of the Chinese fighting force put an end to the UN Forces hopes of returning home for Christmas as they quickly discovered that facing the Chinese was an entirely different kettle of fish to facing the North Koreans.

General Douglas MacArthur, the commander of all U.N. forces in Korea, said, “We face an entirely new war …” Deptula was a member of the Army Signal Corps and attached to the 581st Signal Radio Relay Company. The fact that he was not a front line soldier made little difference, and he saw and experienced the horrors of war as much as any infantryman.

The UN forces were pummelled as they fought their way through the Chinese forces to get to Hungnam. It took them 26 hours to make 40 miles to the port city where a decision had been made to evacuate them. In the midst of bitter icy weather they undertook the evacuation of the UN troops, their equipment and some 98,000 refugees.

The scene at the docks was straight out of hell. A dark, bitter day of utter confusion, noise, anguish and fear with people and equipment being loaded onto anything that floats. Deptula climbed aboard a freighter on that grimy, polar day with the cold reaching into his bones as he and his company set sail for Pusan, four hundred miles away.

When they disembarked at Pusan it was only be loaded onto a derelict train where they did their best to make themselves comfortable in icy, unheated carriages furnished only with wooden benches. Nothing could block out the cold wind that came in past whatever was stuffed into the holes in the broken windows and everyone was chilled to the bone by the time they had travelled the seventy miles to Kyong-ju.

Unsurprisingly the company was in a dismal frame of mind on arrival and illness abounded. Fevers, chills, septic throats and other injuries plagued the men but worse were the unseen scars that refused to heal; their psyches had been irreparably damaged by the horrendous sights they had seen; the frozen bodies dumped into mass graves dug by bulldozers and the awful wounds suffered by many comrades.

The days passed and their tired, dispirited bodies healed physically but Christmas was drawing near and there was no hope of being at home with loved ones for this most sacred of Christian holidays. Being in a strange land so far away meant that carols, services, turkey and trimmings were all just fanciful dreams.

But strangely enough one of those dreams was about to come true; they were huddled around trying to keep warm on Christmas Eve when they were told that there was a Catholic church in Kyong-ju and the priest was to hold a midnight mass. Transport was to be provided and everyone was invited. This little miracle meant so much to these men so far from home on this cold, Christmas Eve and the idea of being able to celebrate the birth of Christ was very precious to all of them.

As they wished their comrades a Happy Christmas, they boarded the trucks and one man started to sing, “I’ll be home for Christmas.”   Looking out into the cold, clear sky where the stars looked close enough to touch they listened to the voice that encapsulated their hopes. The church had war damage; the bullet marks were clearly visible on the outside walls and the windows were broken but no church could have looked more beautiful to these men.

They were very surprised to see that the church had two entrances and that men used one on the left and sat on little wooden chairs set in rows on the left hand side of the church. The women entered through the right hand door, leaving their shoes in the rear of the church, they covered their heads with white shawls and taking a straw mat from a pile at the door they made their way to the right hand side of the church. Many of the women carried infants strapped to their backs with wide bands of colourful cloth. The darkness was kept at bay by a few candles on the altar and bright silk banners were suspended from a ceiling that was slowly losing its plaster.

One banner proudly declared ‘Mahry Xmas’, to the amusement of the servicemen but the sentiment was warmly acknowledged by everyone present and the incorrect spelling was glossed over by the warm reception handed out to the servicemen. The altar itself was draped in silk and decorated with flowers and candles and it stood between a beautiful nativity scene, complete in every detail and a proper Christmas tree decorated with all the baubles, tinsel and ornaments. The scene brought a lump to Deptula’s throat as he imagined the tree that would have been carefully trimmed in a home many thousands of miles away on the other side of the world.

Korean nuns dressed in blindingly white wimples escorted the local schoolchildren into the church where they sat on little wooden chairs at the front. Deptula could only wonder at the difference between the nuns with their scrubbed charges and the servicemen in their stained and torn uniforms but the love emanating from all the Korean people instantly put the servicemen at ease.

One of the nuns played the organ, an ancient instrument that was seriously out of tune. She was accompanied by a girls’ choir singing carols in Korean, and when the servicemen recognised the tunes, which was no easy feat, they joined in singing in English. A cacophony of sound rose up to the heavens from that little church, but nothing could have sounded sweeter to any of them. The entire mass was said in Korean but at the end Father Kim, the Korean priest, turned to the servicemen and gave them a blessing in broken English. He ended by saying, “The Mass is ended; go in Peace.”

After his discharge from the Army, Deptula attended Boston University where he graduated with a degree and taught Biology at Bartlett High School in Webster. All his Christmases since then were observed with his wife and family, but nothing could ever come close to that aching cold Christmas celebrated in a tiny, run-down church with a Korean priest saying mass in a language he could not understand.

At that point in his life he needed the peace offered by his God for all the horrors of war were threatening to overwhelm not on him but all his comrades as well.