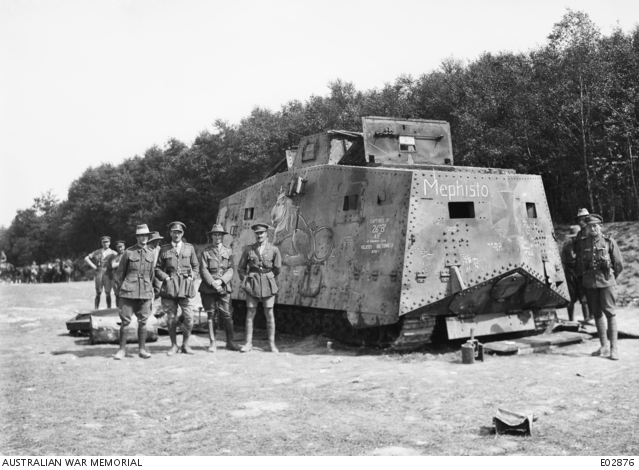 Visitors to the Australian War Memorial museum in Canberra can now see the world’s rarest battle tank. Named ‘Mephisto’, the tank is on exhibition by arrangement with the Queensland Museum in Brisbane, where it has been kept since 1918.

The idea of a tracked, armour-plated battle tank was first developed by the British in 1915. The first prototype was named ‘the tank’ in an attempt to fool German spies into thinking that the vehicle would be used to transport water. British tanks were first used in combat on 15th September 1916 at the Battle of Flers-Courcelette.  Still in development, the early tanks were unreliable and of the 49 vehicles deployed on the battlefield, only half that number (25) actually took part in the attack.

Development work continued, and as reliability, improved production was stepped up. By 1918, British tanks were a familiar sight on the battlefields and over 2500 of them had been manufactured.

France also worked on its own version of the tank, the Renault FT. This vehicle had the rotating turret that was to become a blueprint for all subsequent battle tanks. By the end of the war, over 3000 of these tanks were in action. 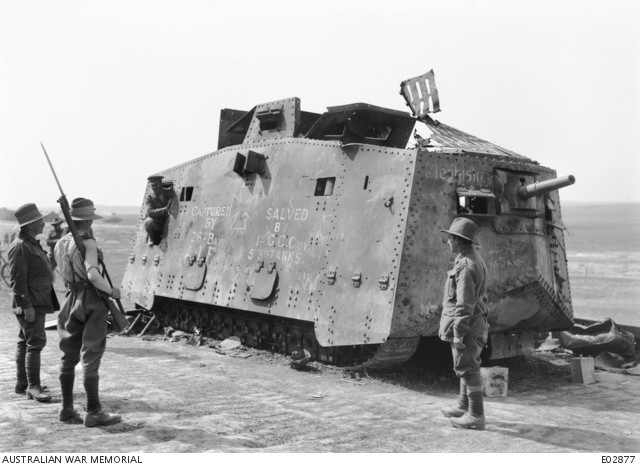 Germany was slower to develop its own battle tank and relied on captured British and French models for its technical know-how and for combat.  Captured tanks were sometimes used in battle by German troops.

Eventually, Germany produced its first tank – the A7V – of which only 20 had been manufactured when the war ended in 1918. The A7V was a veritable monster of a machine, weighing in at 38 tons and carrying a crew of 18 men.

Mephisto, the tank in the Canberra museum, is the only surviving example of the A7V and the story of its arrival in Australia is a glorious one. Early on the morning of 24th April 1918, four German infantry divisions launched an attack on the Allied front line at the French village of  Villers-Bretonneux. British forces had three battle tanks, but the German troops were supported by 13 A7V tanks, and by the middle of the morning the village was in German hands.

On the night of 24th/25th April a counter-attack by allied troops was launched, and in what was later regarded as Australia’s finest hour in its military history, the lost ground was recovered.

A German A7V was captured and eventually taken home to Australia, where is has remained ever since.