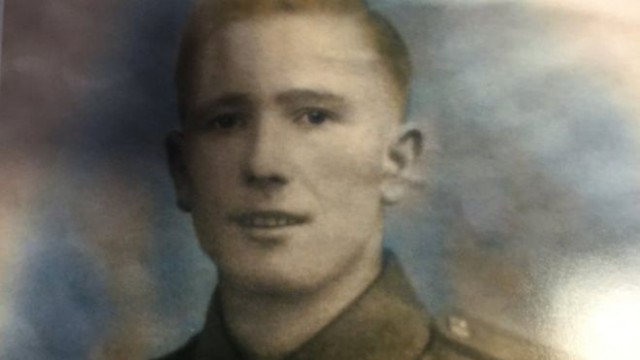 A married couple who met more than 50 years ago have discovered that their fathers had a connection during World War Two.

During the war Cyril Wiltshire, Brea’s father, fought in the British Army and was killed in action in Europe in the summer of 1944. The family tried for years to locate Cyril’s remains but could only find his name on a commemorative plaque in the French town of Bayeux, as well as the headstone of an un-known soldier in a nearby military cemetery, which they suspected was Cyril’s.

Ed and Brea managed to locate the headstone in the 1980s, and found out that the man who buried him was also from County Down. When the couple returned home they made inquiries and were able to talk to the man, who told them the names of all the soldiers who had died on the same day as Cyril. Ed and Brea were then able to check if those names were on the other headstones in the military cemetery that Cyril was buried in, and they were.

This told them that they definitely had the right cemetery. As a result Ed got back in touch with his father since he wanted to find out more about his war experiences, the BBC News reports.

He told Ed that he had fought in Europe including France at the exact same time and location as Cyril. The Canadian regiments and British regiments had been working together against the occupying German troops.

Brea’s mother, meanwhile, had kept all of Cyril’s letters and diaries so that they could corroborate the timing and where Cyril had been. Among the letters was even a half written note that was the last one he had been writing before being killed.