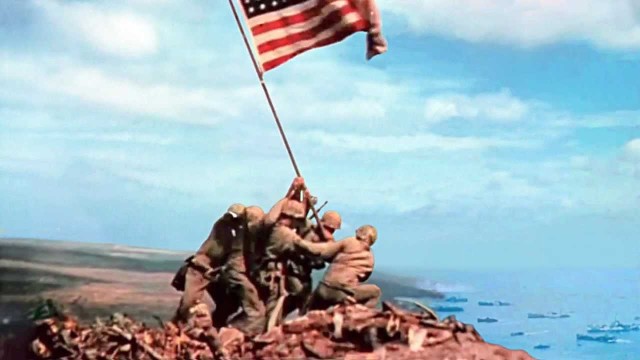 First Lieutenant John Wells heroically served as a marine in the United States military during WW II. He passed away on February 11, 2016, at the ripe old age of 94, at the Arvada Care Rehabilitation Center in Arvada, Colorado. His final words were “my family” as he died surrounded by loved ones. As a marine he will be remembered for courageously leading the charge that successfully placed the first American flag above Iwo Jima.

Wells received a plethora of accolades for his impressive service, including the Navy Cross, Bronze Star, and Purple Heart. He effectively led his fellow men in a frontal assault up the treacherous slopes of Mount Suribachi during the Battle of Iwo Jima in World War II.

After sustaining multiple enemy rounds, Wells was unable to personally make it to the top of the mountain. However, he was so resilient that he continued to command his men on their way to victory. It was his platoon that raised the first American flag only hours before the iconic second flag was firmly planted and famously photographed. This image of the marines raising the flag is one of the best know in history.

According to his proud daughter, Connie Shultz, Wells was a warm, sensitive, and spiritual man right up until the end. This was a man who honored and genuinely loved the Marine Corps with all his heart and soul, long after his days of active duty. A dedicated family man, he expressed his love and appreciation for his family until his last breath.

It was 3rd Platoon, E Company, 2nd Battalion, 28th marines that successfully conducted this famous feat on February 21, 1945. Wells led the assault on the open terrain, against the well-entrenched and determined defender. The notion of surrender was not in the vernacular or thought processes of the Japanese at this point in the war. The heroic battle catapulted the platoon into the spotlight. This unit gained distinction and became the platoon to receive the most military honours as a result of their bravery in  a single battle in the history of the United States Marine Corps. That is really something!

The Navy Cross citation called Wells’ bravery as indicative of courageous leadership and indomitable fighting spirit. The magnitude of what he led his men to accomplish is quite hard to comprehend. He led demolition teams from one enemy bunker to the next, wiping out at least 25 emplacements along the way. The marines were under heavy enemy machine-gun, mortar, and rifle fire, but that did not stop Wells. He relentlessly moved from one flank to the next to lead the waves of assault groups one by one during their attacks on Japanese emplacements. His physical and mental strength, that allowed him to successfully fulfil  his duty in the battle was truly remarkable.

Sadly, Wells was seriously wounded while leading an attack against a reinforced blockhouse that had already blocked his platoon’s progress. However, not even a serious injury could deter him. Wells forged forward and led his men until the well-equipped position of the Japanese was defeated. The citation goes on to explain that within an hour of his injury the pain became so intense Wells could not walk.

Wells went on to establish his command from a position that allowed him to view his men from above. He was able to observe the progress of his men and delivered commands through messengers. Despite unbearable pain, Wells behaved in an incredibly brave manner. He was eventually evacuated to a field hospital, to receive medical treatment, though the battle for the 546-foot mountain raged on for two more bloody days.

Finally on February 23, Wells’s platoon led by E Company’s executive officer, 1st Lt. Harold Schrier, reached the peak of the mountain. It was then that the United States national flag was raised above the Japanese island. Amazingly, Wells was able to convince a corpsman to donate enough morphine to him that he was able to escape from the hospital. Shortly after, he arrived to join his men and witness the flag he fought so valiantly for- flying high on the summit.

The first flag was eventually replaced by a much larger one. It was photographer Joe Rosenthal who took one of the most famous war pictures in U.S. history. As for the Marine Corps, it is undoubtedly the single most iconic image associated with that branch of the military.

Once the war ended and Wells returned home, he attended Texas Tech University. There he studied petroleum geology before pursuing a career in the oil industry. He remained a member of the Marine Corps Reserve until 1959 when he retired with the rank of major. In 1995 he published a memoir describing  the Iwo Jima battle, entitled, Give Me Fifty Marines Not Afraid to Die, The title alone is enough to give a person goose bumps! In this work you can read more about this true American hero.