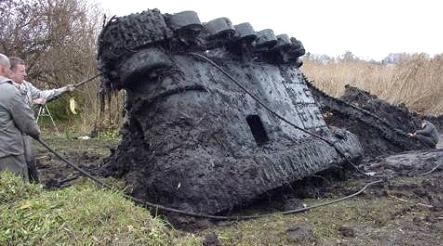 In February 1944 a lend-leased M4A2 Sherman tank was ambushed by German anti-tank  gun when it was on the ice of the swampy Gniloy Tikich river in Cherkasy Oblast of Ukraine. The tank was hit twice — in the tracks and in the turret. The turret was knocked off the hull, three crew members were killed instantly. The driver survived but the next day he was found and shot by SS troops.

This tank was found in 1998 and in November 2004 after a lot of effort it was dragged out from the swamp of the old riverbed on the bank by the team of enthusiasts supported by Ukrainian Army. In the gun barrel the found a  75 mm shell and they decided to unscrew the fuse and then hit the shell out with a sledge hammer!

The M4 Sherman was distributed in the thousands by the Americans during WW II to the Allied forces and the Russians.  The designers punted that the tanks had durability, middleweight, and size, a limited number of variations, so the parts and spares were standardized, and they were easy to produce.  This tank took point on many of the major offensives launched by the Allied and Russian forces from 1942 onwards.

The name ‘Sherman’ again was given by the British and came from the Civil War General, William Sherman.   The M4 was the first armored vehicle to carry a gyroscopically stabilized gun and sight.  This device only worked vertically and could not automatically slew the turret. 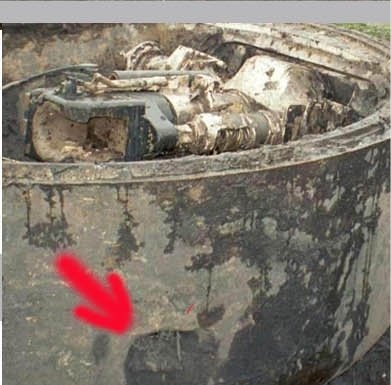 Above you can see where the turret was hit.
> 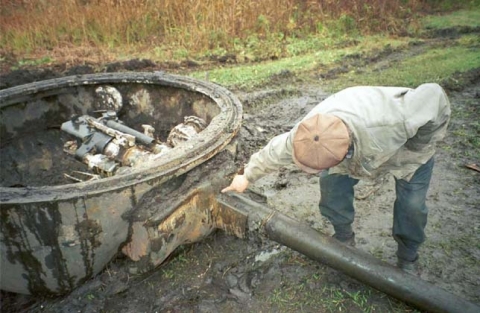 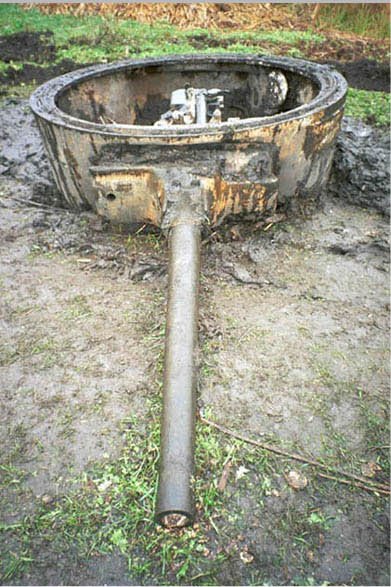 The Central Museum of Armed Forces of Ukraine in Kiev there is a unique tank – an American M4A2 Sherman.  She was received in January 1944 from the US Lend-Lease agreement. According to archive documents, the Soviet Sherman company consisting of nine Shermans was sent to to block the advance of elements of the SS “Viking” Division. 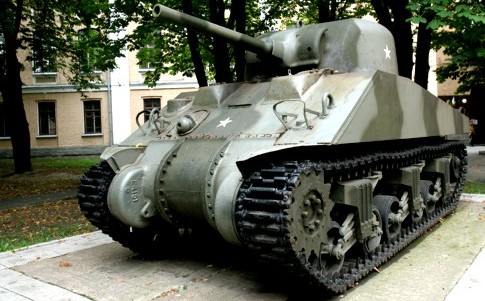 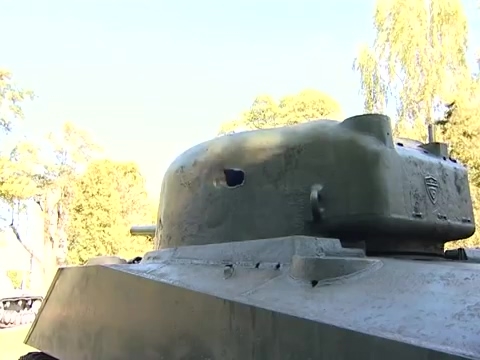 The Sherman drove onto the frozen river of Gniloy Tikich. The Germans were waiting with a self-propelled gun, camouflaged in a cottage on the outskirts of the village. Slipping his gun barrel through a broken window, the Germans were watching every move. Opened fired and destroyed the tank. It had lay hidden for 60 years until it was recovered. The hull and the turret sunk and, sat in the marsh at the distance of 70 meters from the river bank and with time they were completely covered with the mud, restored and can now be seen at National Defence Academy of Ukraine, Kiev.