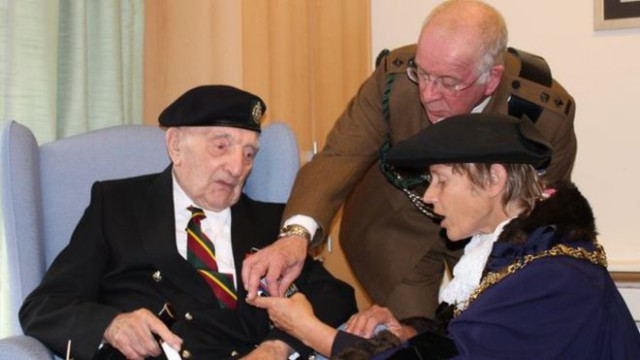 A 98 year old veteran of World War Two has been honoured with the Legion d’Honneur, France’s highest military honour.

The veteran Sergeant Robert Rigler from Poole in Dorset in the south of England and his comrade Reg Cossins, who is 94 years old, have been awarded with the French military award by Poole’s Mayor for their role during the Battle of Arnhem in 1944.

The Battle of Arnhem was epitomised in the movie ‘A Bridge Too Far’ as Allied troops battled to take hold of various bridges in the Netherlands away from Nazi control. It was part of the Allied advancement across Europe and into Germany after the D-Day landings in June that year.

Both Robert and Reg were part of the Fifth Battalion Dorset Regiment that helped during the evacuation of the 1st Airborne Division trapped at Oosterbeek, near Arnhem.

Robert and his regiment were able to get 20 soldiers out of Oosterbeek by rowing a boat across the city’s Rhine River two times to get the soldiers out. The total number of troops in the town was almost 2500 from the First British Airborne Division.

The regiment came under heavy machinegun and artillery fire, but the regiment continued their daring rescue attempt in the middle of the night and during pouring rain.

France has been continuing to award the Legion d’Honneur as part of its commitment to honour all of those soldiers from around the world who fought for the country’s freedom during World War Two.

Robert and Reg’s award ceremony took place at their care home in Poole in Dorset. Robert commented that the memories of that night are still very vivid in his mind. He said it was so dark that he couldn’t see his own hands in front of him and they couldn’t use spotlights because the enemy would see them.

He says that no amount of training can prepare a soldier for the time that he comes face to face with the enemy. Robert remembers how the bullets showered over them, but they all just hoped they wouldn’t be hit and just carried on, the Mirror reports.

When the soldiers got safely back to their base they all had a well-deserved cup of hot tea.

Robert was also honoured with the Dutch Order of the Lion Bronze Cross for his role and service during the Battle of Arnhem.