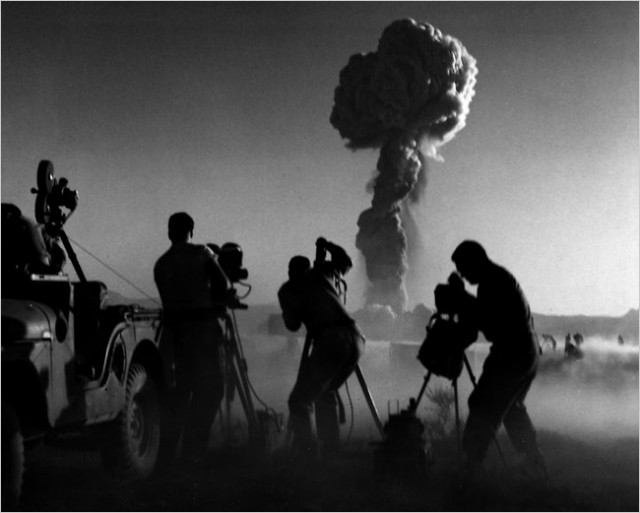 With the release of previously classified footage from the early Cold War period, a new debate about the role and fate of ‘unrecognized patriots’ of the atomic age is stirring among academics and general public alike. These patriots were the Photographers hired by the US Army to film the atmospheric atomic explosion in the regions of Nevada and the Pacific. It is estimated that a total of 6500 pieces of footage were put under classified category after the early period of atomic age, which spanned between the years of 1945 to 1952, ended.

After the Second World met its logical end with United States dropping two atomic bombs over Japan, a different kind of War took the World by surprise i.e. the Cold War. Historically the Cold War had started with Nagasaki and Hiroshima bombings, since one of the reasons why United States had to go that far was to Stop Russians getting involved in the Pacific after they helped defeat Hitler.

With the advent of Cold War between Russia and United States, a massive surge of atomic research was sanctioned by the American government to explore the deadly weapon. The only way to effectively observe the deadliness and effectiveness of the atomic bombs was to detonate various forms of the bombs. In order to capture the explosions on film a special US corps was established in 1947 equipped with state of the art lenses and cameras.

The story of those who served in this Corps is one of neglect but of utmost significance in the wake of the latest wave of terrorism and global tension on our planet. Operating from their Headquarter in a Hollywood, these filmmakers and photographers were given the highest security clearance and were expected to capture the explosions in as much details as possible. Theses footages were then scrutinized by a number of atomic scientists and researchers who were studying the impact of atomic warfare on humans and environment. Sometimes films were presented to politicians to give them an idea about the destructiveness of atomic bomb.

It is very hard to say with absolute certainty that the authorities and researchers were fully aware of the dangers posed by the exposure to atomic explosion, however most of the photographers who extensively took part in the filming died with cancer. Surviving members of the Corps are certain that their cancer was due to their involvement in the filming of atomic bombs, The New York Times reports.

The declassification process of the Atomic footage originally started in the Clinton era, sometime in 1997. Initially the government planed to release the footages in small batches over a stretched period of time, but due to the tragic events of September 11, 2001 the plan was scraped. In the later year on various occasions some of the footages were released on a number of government websites. Some are even available free on YouTube for public viewing.