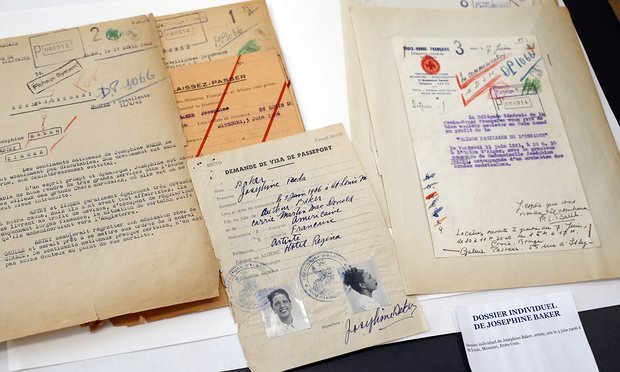 Historians in France have discovered secret service documents from World War II that provide information about how both the Germans and the French conducted their underground operations. Included in this treasure trove are records on celebrities like the French designer Coco Chanel, investigative files on collaborators, and much, much more.

The cachet includes letters, reports, cables, and photos from French resistance intelligence agencies, the Vichy regime, and the German authorities (seized after the war). Most were never published. They were stored for decades in the medieval castle in Vincennes, east of Paris, and have not been studied by historians until recently.

The documents reveal the details of German spy operatives’ pursuit of members of the French resistance, the activities of Gen. Charles De Galle’s government based in London, and efforts to track war criminals.

Tabs were kept on celebrities that the French secret service found suspicious. Coco Chanel’s file includes a note written in Paris in November 1944:

“A source in Madrid informed us that Madam Chanel was in 1942-43 the mistress and agent of Baron Günther von Dincklage. Dincklage used to be an attaché at the German embassy in 1935. He worked as a propagandist and we suspect him of being a [German] agent,” the document says.

Frédéric Queguineur is in charge of the archives. He says that this document shows that Coco Chanel was documented as an agent by the Abwehr, Nazi Germany’s intelligence organization. “From the German point of view, they registered her,” he said, “so it means she potentially could be a source of information, fulfill a mission, work for them. But from her point of view, we don’t know if she was really aware of that.”

Based on a government decision in 1999, boxes of records were given to the defense ministry’s archives without a classification system. This was an intelligence technique to keep foreign governments from knowing which documents were secret. Only half of the documents have been inventoried. Until they have been digitized, members of the public wishing to access them must go to Château de Vincennes.

“We have been captivated by the importance…and the richness of these archives, the feeling, in some way, to find documents that had never been seen for 70 years,” Queguineur said.

Thomas Fontaine, historian, emphasizes that history is often more complex than it appears at first glance. As an example, he mentions the example of a regional resistance group leader who went on to serve the Germans. “It’s very clear in the files of the Gestapo that they detain his wife and daughter in order to make him talk,” he said.

There are many notes providing personal details on people involved in either French or German operations. Josephine Baker, the American-born, singer and entertainer is one who figures prominently in the files. Baker was involved in the Free France initiative. One note regarding her reads: “She demonstrates a tremendous devotion, she is totally unselfish. A brave and vibrant spirit, she is able to render us great services.”

There are also personal recollections of resistance members, who told their stories to the French intelligence services when the war ended. Sebastien Abertelli is a historian who is beginning research on the 600 women who served in uniform in De Gaulle’s army. Their recorded recollections allow them to “talk” to him.

The archive also has private documents like the handwritten letter from De Galle’s niece Genevieve to her “dear Uncle Charles.” In that letter, dated May 1943, she asks for advice on how she can serve her country.

Historians note that some files are incomplete; it is possible they have been purged to keep certain details secret. These include the file of former French president François Mitterrand, who had served under the Vichy regime before he joined the resistance. His exact role in the Vichy Regime, has always been controversial.

The documents answer many questions, but they also leave many important questions unanswered.