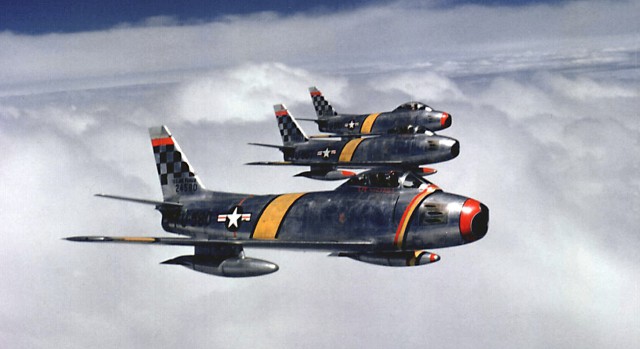 The Korean War was dominated by air battles between the US F-86 Saber and the Russian MiG-15.

The US military was shocked when it encountered the MiG-15. It was light-weight, quick, adaptable and was armed with serious weaponry.  Its engines were copies of British made jet engines, which the Russians had been given by the British as a goodwill gesture at the end of World War Two.

The Soviets used the MiG-15 as a hunter for the US B-29 Superfortress bombers, which were hammering North Korea with bombs. The B-29s had to be escorted by US fighter jets, the F-80 and F-84, but they were powerless against the MiG-15.

The US rapidly built a squadron of F-86s to fight back, with a maximum speed of around 700 miles per hour. It wasn’t able to fly as high, go as fast or adapt as much as the Soviet MiG, but the F86 could dive faster and was more stable. It also had a radar as part of the gunsight which was a vital upper hand in high-speed airborne fighting.

The Soviets sent many of their top flying aces to North Korea to support the Communist troops, as did the Americans. While both sides matched pretty evenly in terms of pilot capabilities and aircraft the US was unable to track and hunt down the MiGs since they would return to prohibited airspace within China.

The Soviets began to send more pilots but they were younger and did not have as much training as their aces, and that made a difference. These rooky pilots were also joined by more local Chinese and North Korean men who lacked skill and training. It was at this point that the Americans were able to get the upper hand in the air war, The National Interest reports.