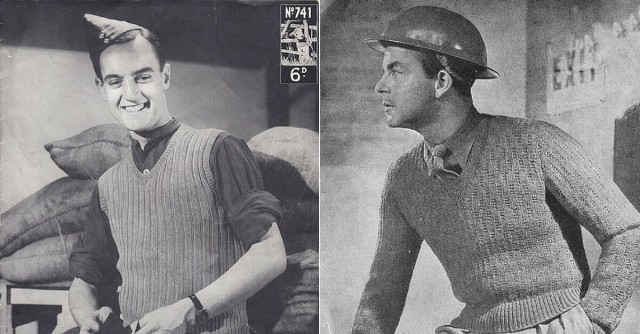 The history of modern warfare contains many references to the fact that civilians – more particularly women – have traditionally knitted woolen articles to send to the soldiers fighting at the front. Knitting provided a way for those at home to feel they were a part of the war effort, and the soldiers welcomed hand-made garments that reminded them of who they were fighting for.

One of the earliest references to knitted garments from home comes from the Crimean war. Everyone is familiar with the woollen balaclava, often called a balaclava helmet, but not many people know the origin of the name.

The battle of Balaclava (October 25, 1854), in which the legendary Charge of the British Light brigade took place, gave its name to the knitted head coverings worn by soldiers under their military helmets. The balaclavas were knitted by wives and sweethearts at home.

Sixty years later, First World War troops wore balaclava helmets and other woollen garments to ward of the cold and damp in the trenches. A warm pair of socks or a sweater, sent from a loved one at home must have been a welcome sight to a freezing rifleman.

On November 24, 1941 Life magazine urged women to knit a million sweaters to send to American troops.  The article said “To the great American question ‘What can I do to help the war effort?’ the commonest answer yet found is ‘Knit.” The magazine provided the knitting pattern and instructions, and thousands of Americans duly started knitting.  The sweaters had to conform to a standard army pattern, and had to be ready for dispatch by Christmas.

Knitting has sometimes played a different role in warfare, however. During the Second World War, the Belgian Resistance movement recruited expert women knitters who lived near railway stations. The women watched for German troop and supply trains and recorded their movements in knitting patterns. The innocent-looking knitting instructions could then be carried to their destination without fear of detection. Britain’s Office of Censorship banned the sending of knitting patterns abroad in case they were used by German sympathizers to send coded messages to the enemy, The Telegraph reports.

Knitting was considered a vital part of the war effort and the British government exempted knitting needles from its scrap metal drive.  Old clothes wool could be unraveled and re-knitted. This practice was an important part of Britain’s “make do and mend” campaign.