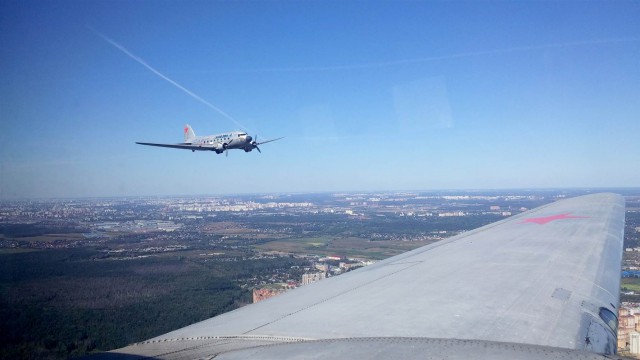 A joint Russia-US air operation has taken place across Alaska and Siberia this summer.

A team of both Russian and US Air Force pilots flew two World War Two vintage Douglas DC-3 planes across the Alaska to Siberia flight path, which was notoriously dangerous during the war. The route was known as ‘AlSib’ and the planes came into land at Vnukovo airfield just outside of Moscowto a rapturous crowd of well-wishers and aviation enthusiasts.

The last time anyone flew the Alaska-Siberia route would have been more than 70 years ago before the end of World War Two.

During most of the war, the then Soviet Union and Allies worked together in order to thwart the advancing Nazi armies. To support the Soviet war effort from the East, the US supplied military equipment, weapons and vehicles to the Soviet forces via the Alaska-Siberia air route.

It was a long and dangerous route at that time and around 160 US crewmen lost their lives flying that path. The most common problem was the extremely cold temperatures, or getting lost in the sparsely populated Siberian region.

Now the joint US-Russian project to fly the route once more was organised by ‘Warplanes to Siberia’ to honour those who flew the route during the war, 70 years after the war ended.

One of the Douglas DC-3s that took part in the flight was also used during the D-Day landings in France in 1944. The two DC-3s retraced the exact route that the planes would have taken during the war for the trip and flew at the beginning of August.

One of the pilots said that even today the route comes with problems, particularly when flying over the Bering Strait that separates Alaska from Siberia.

Fortunately the DC-3s have been fitted with modern, up-to-date navigation systems and weather radar. The entire flight took three weeks and there were no major problems throughout the trip, the NBC News reports.

All of the pilots were amazed at the welcome and reception they received when they finally made it to Moscow.

Even though tensions between the two countries have heightened in recent months, but this trip showed a true camaraderie between the two nations that stems back to the days of World War Two.