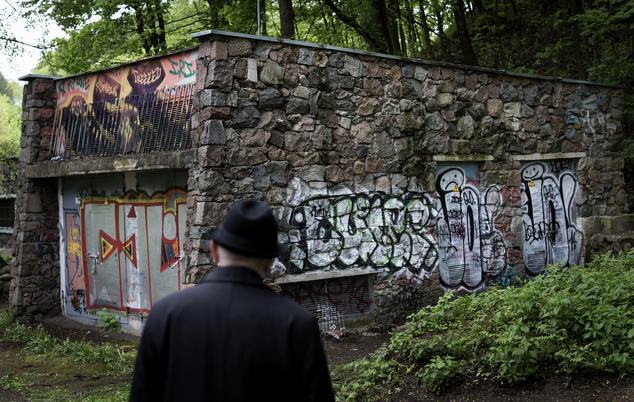 In this photo taken on Wednesday, May 13, 2015, Shmuel Levin, the Chairperson of the Jewish religious Community of Vilnius and Lithuania, looks at the power substation built of tombstones from a Jewish cemetery in Vilnius, Lithuania. [Via]

A power station that was built in the Lithuanian capital of Vilnius has been found to be built with Jewish tombstones of people who were killed during the Holocaust. The Lithuanian government has now ordered the entire station to be demolished in response to the findings.

The power station was originally built in the 1960s when Lithuania was ruled by Moscow.

It was not until earlier this year that a man who lives locally to the power station, Giedrius Sakalauskas, noticed some Hebrew and Yiddish markings on the building’s brickwork. He reported it to local authorities which brought in researchers and archaeologists to analyse the building’s structure.

They confirmed that the walls of the station had been partly made with tombstones stolen from a nearby Jewish cemetery.

Giedrius says that he had always believed that the building was strange and could never understand why a power station would be built of large granite blocks rather than bricks.

It was when Giedrius looked at the building’s walls up close and he could touch the blocks that he realised they might be tombstones.

The Jewish cemetery was located opposite the power station and had been demolished and closed by the Russian authorities more than 50 years ago.

The engravings in Hebrew and Yiddish are not immediately noticeable. It is only when you look very closely and focus on the gaps in between the blocks that the writing can be seen.

The power station is still used by the local community and the city’s mayor, Remigijus Simasius, has told the company that owns the building and the electricity supply that they will need to find a way to remove the tombstones and return them to a proper graveyard.

This is not the first instance of Jewish tombstones being used for building works in Lithuania. Just over 20 years ago it was discovered that a set of steps which had been built on a footpath that leads up to the top of Tauro Hill – a lookout over Vilnius – were made from Jewish tombstones. The city’s authorities ordered them to be removed and replaced with regular bricks, the Haaretz reports.

There are also two more cases which are currently being investigated by the city’s authorities. These include steps leading up to the city’s Reformed Evangelical Church and a school wallboth in central Vilnius.

The mayor says that he is in continuous contact with the local Jewish community about the tombstones, so that they can be sensitively removed and taken to a proper place of rest. More than 90% of Lithuanian Jews were killed during World War Two.