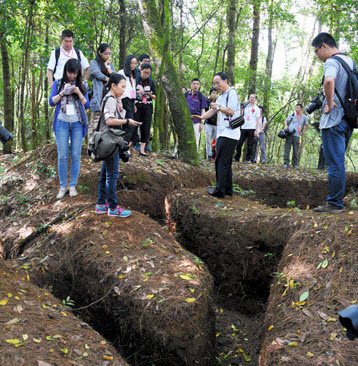 A network of World War Two Japanese tunnels and bunkers built into the Chinese mountains near Myanmar has been discovered.

The find includes a huge network of tunnels connecting bunkers and trenches to hold Imperial Japanese troops during the war. Its location is at one of the bloodiest battlefields in the Pacific theatre of war at Mount Laifeng in Tengchong, Yunnan Province.

On the 75th anniversary commemorations of the end of World War Two, the Chinese Government opened the cave network and gave a tour to news media so that they could see and experience the Japanese positions during the war.

Mount Laifeng is around 2000 metres high, and is today popular for hiking and other tourist activities.

A local museum in the area has taken over management of the tunnels and says that they are so solidly built that it caused many troubles for the Chinese military.

In the Second Sino-Japanese War, the Allies of Britain and the United States contributed supplies to the Chinese troops and to the local government in Chongqing, which stretched through Yunnan Province and the north of Myanmar, and was led by Chiang Kai-shek.

The supply routes became a key target for the Japanese and they took Tengchong in 1942, along with Mount Laifeng, which overlooks the town.

The Chinese Kuomintang ground troops were supported by US air raids, which bombed Japanese positions, and the Chinese began to take back the region two years later in around 1944.

It wasn’t until 2014 that the Chinese Government began to investigate, analyse and preserve the area at Mount Laifeng. Excavation work has now revealed the solid network of bunkers and trenches about one to two metres in depth.

A war cemetery is situated nearby along with the local war museum. One of the region’s World War Two veterans says that 70 years later China now has national pride and international status as a strong country. Lu Caiwen, is now 91 years old and fought on Mount Laifeng during the war, The Asahi Shimbun reports.

He said that today most Chinese and Japanese people want peace and that the younger and future generations must be educated about what happened on the mountain during the war so that it never happens again and that peace can be maintained.