Nobuo Fujita is one of the only World War Two enemies to have tried bombing raids directly over mainland America. Nobuo died in 1997 aged 85, but during the war he was a Japanese pilot and flew several bombing raids over Oregon in 1942.

Nobuo’s bombs were dropped all over Oregon State’s forests and caused several massive forest fires. His missions were part of a Japanese military strategy to bring the war to the American mainland. They believed that this would cause the US Navy to retreat from the Pacific region and head back to its homeland to protect it from attack.

Later in life Nobuo admitted he regretted his bombing raids on the US mainland and reconciled with the local people of the town of Brookings in Oregon, which he had bombed during the war.

When he died the people of Brookings said that he had turned out to be a good man and announced him as an ‘honorary citizen’ of the town.

Nobuo first visited Brookings in 1962 and took with him a family heirloom of a 400 year old samurai sword to present to the people. He had carried the sword all through World War Two and presented it to Brookings as a sign of peace. It is still hanging in the Brookings public library to this day.

Nobuo’s daughter, Yoriko, says that before that first visit her father was very nervous, since he was unsure what reception he would get from the people of Brooking, who he had targeted just twenty years earlier. 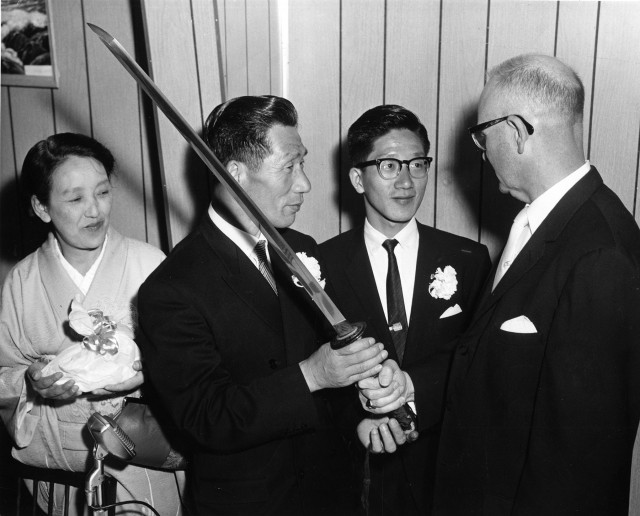 She even said that he planned to use the sword to commit ritual suicide in front of the locals if they were still angry with him, in order to show his remorse, The New York Times reports.

This was not required and the Brookings’ locals welcomed Nobuo into their town. Brookings is a small town quite far from anywhere with a population of around 5,500 people. It’s located along the south Oregon coast line and its main economy is logging and farming. Due to its association with Nobuo it also now has a unique collection of Japanese books in the library.

Nobuo actually donated $1000 to the library so that Brooking’s younger generation could learn about Japanese culture and try to create mutual understanding in an effort to maintain peace and never return to war.