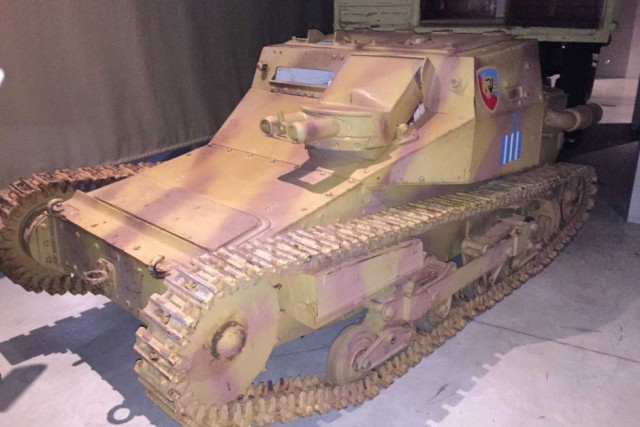 An unusual Italian tankette used during World War Two has been transported to Australia for a display at the Australian War Memorial (AWM) in Canberra.

The tank is a Carro Veloce L.3/33 and was used in the North African theatre of war in 1940 and 1941. It was captured by Allied soldiers as they gained ground against Italian and German troops. The Italians used the Carro Veloce not for battle, but as a vehicle for reconnaissance and for towing supplies.

The tankette was designed and first built in the early 1930s and was utilized by the Italian Army in Africa, Spain, Eastern Europe and Greece, before being used in World War Two.

Around 2000 of the Carro Veloce were made and it has made a great addition to the AWM’s display since they had few Italian artifacts before they received the tank. The tank could hold two men and operated on a 2.7 litre engine, powered by petrol. It weighs around three tonnes and reaches around 4.5ft high, and does not have a gun turret like conventional tanks, but was fitted with two side guns.

Its small size meant that it was ideal to remain out of sight of the enemy and could undertake fact finding reconnaissance.

One crewman would be the driver on the right, while the second would be the gunner sitting on the left. When the British analysed the tank they found it wasn’t very smooth and made for an uncomfortable ride.

Australian troops fought fiercely against Italian troops in the North African region in the early days of the war, but very few military equipment and artefacts were returned to Australia. Italian vintage tanks and equipment are also rare to come by anywhere in the world, the ABC News reports.

When the Carro Veloce was captured, Allied forces transported the tank back to the UK where it was analysed and then sent on to Canada after the war.

The tank is now on loan to Australia from Canada for a two year period. The Italian tank will be displayed alongside a Japanese tank of similar size, which was added to the AWM collection for VJ Day celebrated earlier this month.