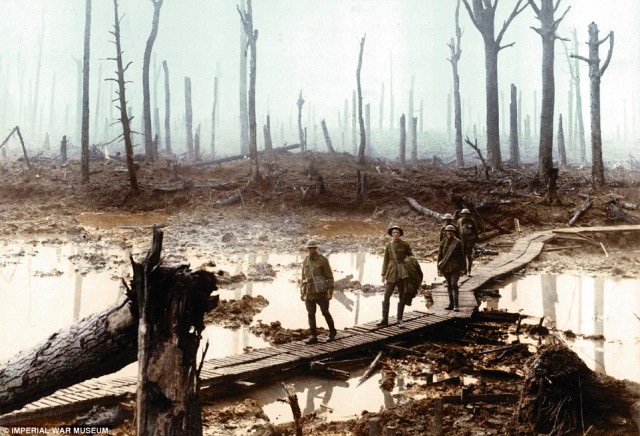 Operation War Diary is a project, started three years ago, by the National Archives in Britain. The aim of the project is to digitise the War Diaries that were kept during World War 1. These Diaries are official British Army Regimental War Diaries which are a record of each unit’s activities during the war. These records were not intended to record details of individual soldiers, though there are some mentioned, but rather they record the time and place of activies for British forces on a daily basis, but some are more detailed down to hourly recordings.

In the past three years they have digitised some 300,000 diary pages but the data contained within the pages remained locked away and therefore unavailable for analysis by researchers and historians. The task of ‘unlocking’ or tagging each piece of information and assigning it to a category was a formidable task but an unusual solution was found to this problem. The National Archives, in association with Goldsmiths at the University of London, turned to thousands of, so called, Citizen Historians, and asked them to help.

Citizen Historians are any member of the public, with access to a computer and the Internet, with an interest in history and a willingness to log in and spend some time reading the digitised, handwritten diary pages. While reading the pages, they were asked to tag any person, place or activity that they came across. This provided the National Archives with a huge database of information about the war, how it was fought, where it was fought and what the conditions were like. Researchers are hoping to answer simple questions like how often soldiers could wash themselves or their clothes or how often they enjoyed hot meals.

World War I which lasted from 1914 to 1918 was a brutal time with millions of young men were mobilised to fight for their country, and over 7 million men lost their lives. In 1914 the Germans invaded Luxemburg and Belgium, and as they moved towards the French industrial heartland, the British entered the war. The German advance was halted, and both sides dug in, creating miles of trenches that extended from, the North Sea to the Swiss/French border. The frontlines on the western front remained largely unchanged for four years, and engagements across them resulted in the deaths of millions of men, with negligible territorial gain. Eventually military technology changed, and with the use of poison gas, tanks and air support the Allies slowly made progress until the war ended in November 1918.

While this latest research has shown that they may have come under enemy fire one day in five, it cannot convey the abject horror of living under trench conditions. The most important task was to first dig the trench, and this was done mainly by Chinese labour. Over 100,000 Chinese labourers worked with the British Army, in the construction of the trenches over the Western Front. The Germans and their allies dug trenches a short distance from the British trenches, and the area in between them was known as No Man’s Land. As Belgium has an extremely wet climate this area was a veritable mud pit, water-filed shell holes or trenches could swallow up soldiers so they were never seen again.

One of the  problems of life in the trenches was the rats. The trenches were infested with millions of both black and brown rats, which reproduced at a phenomenal rate. A pair of rats could produce over 900 young in a year, so the efforts of the soldiers to slaughter them was futile. The rats gorged on human remains, and the brown rats could grow to the size of a small cat. These pests were the bane of the soldiers lives, bringing infection from their bites, as well as constant harrying, even running over their faces whilst the men were trying to sleep. These pests contaminated the rations issued and spread disease throughout the trenches.

Another ever-present pest was lice. These tiny creatures that caused untold misery, lived in the clothing of the soldiers. They hid in the seams and even after washing they would reappear, when the soldier’s body heat warmed the clothing.   Not only were these pests the source of constant irritation, they also caused Trench Fever. Symptoms of this disease were the onset of extreme body pain, followed by a high fever and the cure took some twelve weeks away from the trenches.

In addition to these irritations the soldiers had to contend with sharing their accommodation with frogs. Millions of frogs were attracted to the stagnant pools of water.

Not content with all these problems the last major issue, apart from being shot at regularly, was head lice. Many soldiers chose to shave their heads completely rather than try to remove the nits.

At the start of the war, Trench Foot was a major problem, caused by soldiers standing in cold, wet, muddy and filthy conditions. This fungal infection, could result in gangrene taking hold, and amputation of the toes or feet would follow. From 1915 conditions improved somewhat in the trenches, and this problem was slowly overcome.

What has been deduced so far about the daily life in a trench? The entire battalion was woken before dawn and instructed to ‘stand to’. This meant that everyone stood on the ‘fire-step’ with rifle at the ready and bayonet fixed, in case the enemy made a dawn attack. The fire-step was a step, cut a couple of feet above the level of the floor, and by standing on this step, soldiers could peer over the top of the trench, to look toward the enemy positions. The step was cut above the floor of the trench, so soldiers could move along the trench without exposing themselves to enemy fire. As day light dawned a period of ‘morning hate’ would occur, often accompanied by shelling and small arms fire, directed toward the front, to try and prevent any early morning attacks.

With ‘stand to’ over, some areas would issue a tot of rum, which would accompany the daily ritual of cleaning your rifle which would be inspected by an officer. Following rifle inspection, breakfast would come around. In many places this was accompanied by an unofficial truce and the wagons that brought the food would not be fired upon. This practice met with strong disapproval by senior officers who did their best to stamp it out but the practice did prevail.

With breakfast finished NCO’s would assign work to each man. These tasks included repair of the duckboards that lined the trenches, refilling sandbags that lined the tops of the trenches and repairing the walls of the trenches that often failed due to heavy rain. Another very important task was pumping out the water that tended to collect in the bottom of the trench causing all kinds of misery for the inhabitants. Once official duties were finished the men could attend to person things such as writing letters or preparing meals. Sleep was a precious commodity and everyone tried to snatch a few hours where they could.

Movement was restricted during daylight hours as the trenches were under surveillance from snipers so most men tried not to move around too much. As dusk fell, the command to ‘stand to’ was once again issued until darkness fell. Night time hours were very busy with men being sent back to collect rations and water; a dangerous mission as the enemy waited for these excursions and tended to target them. Sentry duty was also done, by standing on the ‘fire-step’ and watching the enemy positions. The risk of men falling asleep on sentry duty was very high, so this duty was limited to two-hour stretches, and the punishment for falling asleep on sentry duty was death by firing squad.

Patrols into No Man’s Land were also sent out at night. Some patrols were to repair the barbed wire fortifications that had been erected to make dawn or dusk attacks more difficult but some men were sent to deliberately try to hear what was being said in the enemy trenches; a means of gathering valuable information. Often patrols would bump into enemy patrols in No Man’s Land. When this happened, both patrols had to decide whether to, hurry past each other pretending not to see the other patrol, or engage in hand-to-hand combat. Neither patrol could fire a weapon as that would invite both friendly fire from their own trenches, as well as enemy fire from the other side.

Battalions were also rotated at night. Men coming into the trenches would walk through many miles of stinking trenches being shunted ever onward until they eventually reached their destination. The would have to carry in all their trench equipment, such as picks and shovels, duckboards and corrugated iron as well as their personal gear and rifle.

The first thing that any visitor to the front lines would have noticed about the trenches was the appalling smell. Latrines often overflowed, corpses often were buried in the shallowest of graves, the trenches contained stagnant water and the bodies of rats and other dead animals rotted under the duckboards, men had no facilities to wash so the smell of unwashed bodies added to the general miasma. Creosol or chloride of lime was spread liberally to ward off infection and disease.

It is interesting to note that the research from this project has determined that men spent about half their time in a front line trench but in the conditions described it must have resembled the underworld. Statistics and research can certainly analyse numbers but they  cannot portray the abject misery that most soldiers experienced when serving in the trenches.

The diaries remain a fascinating source of information, despite their limitations and it is hoped that they are made available to the public, in the near future.