One US Navy veteran played a crucial role in capturing Japan’s most secret weapon, the I-400 submarine, in the Pacific theatre of World War Two.

Gordon Neslund from Roseville, California, served on the USS Proteus when the ship was told to stop its regular duties and help US Navy submarines capture a Japanese submarine that had not surrendered.

The war had already ended, and the Japanese had surrendered four days earlier, but the US Navy chiefs were still concerned that some of the Japanese Navy troops would try to continue the fight.

The USS Proteus followed the Japanese submarine for hours until it finally raised its black flag, which was a sign of surrender.  As the U.S. ship got closer and crewmen began to board the Japanese vessel, it came to light that the submarine was bigger than they had anticipated.  Neslund recalls the size of the sub and how none of the crew thought it would be that big. 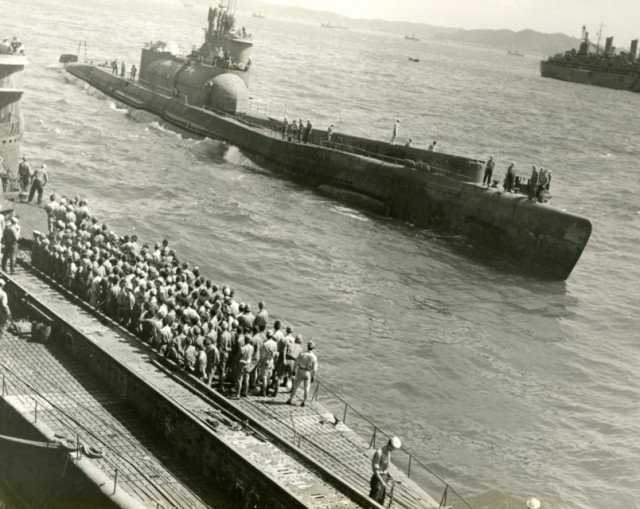 It turned out to be one of Japan’s military secret super-weapons.  It was the I-400 submarine; around 400 feet in length, longer than a football field, and fitted with both guns and torpedoes. It was also able to carry three fighter planes in a hangar; they could take off from a specially-fitted catapult on its deck.

The I-400 class was designed with the range to travel anywhere in the world and return. A fleet of 18 boats was planned in 1942, and work started on the first in January 1943. Within a year, the plan was scaled back to five, of which only three were completed.

A military expert who has written about the I-400  said that there was and still is nothing like this ship. Gary Nila’s new book, I-400: Japan’s Secret Aircraft-Carrying Strike Submarine: Objective Panama Canal, details the story of the submarine. A new documentary has also been made by the Japanese network Nippon TV. They interviewed Gordon for the show since he had seen the super-sub.

The Nazis were notorious for their work in developing super-weapons, in particular, long-range missiles like the V2 while the U.S. worked to develop the atomic bomb. For the Japanese, it was the I-400, and they produced three of them during World War Two.

The Japanese planned to attack the U.S. mainland on the west coast and to particularly target the Panama Canal so that they could disrupt supply and shipping routes to the Pacific theatre of war.