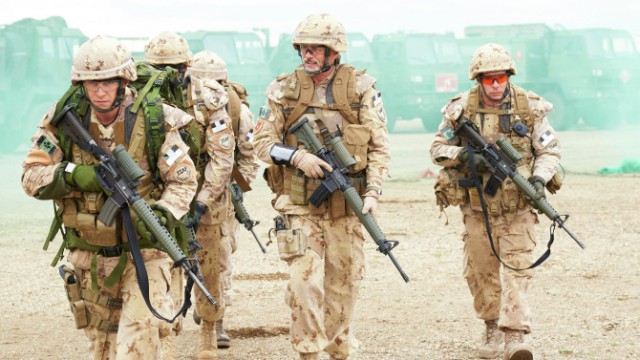 Filmed in Manitoba and Jordan, Hyena Road is a 2015 Canadian film, written directed by and starring Paul Gross. The film deals with the Afghanistan war, and in particular with Canadian forces as they construct the road of the title. The road runs through heavily mined Taliban territory. It links the western edge of Panjwaii to the main highway to Kandahar City, and is vital to the allied forces’ attempt to defeat the Taliban.

Notable for its feeling of authenticity, the film is narrated by Gross’ character Pete Mitchell, an intelligence officer who talks about the difficulty of knowing friend from foe among the rival Afghan tribes. Out on the road itself, snipers see things differently – they shoot anyone they see placing explosives. These actions must be authorized by Jennifer, their operational commander (played by Christine Horne) who is conducting an illicit affair with Pete Mitchell. Jennifer makes assessments and issues orders via a radio link from her base, over nine miles from the action

When Sniper Ryan Sanders (played by Rossif Sutherland) and his comrades come under threat from the Taliban they seek refuge in a small, walled village and are saved by a mysterious Afghan. When Ryan tells intelligence officer Pete Mitchell about their rescue, Pete is convinced the mystery man is The Ghost, a legendary Mujahedeen warrior played beautifully by Neamat Arghandabi. Pete resolves to meet The Ghost, and enlist his help.  The Ghost agrees to help the Canadians, but the kidnapping of two young girls from the village threatens the mission, The Globe and Mail reports.

The film looks at three men who stand at the crossroads of this war.  Pete Mitchell, a cynic who understands the complexities of a world where all is not as it seems – he relieves the cynicism with touches of humor.  Ryan the sniper is an uncomplicated character who believes the world would be a better place if he can kill the right people. The Ghost stands between them, the enigmatic man the Russians tried to kill.

Hollywood war films about good men and women triumphing over the situation they find themselves in are thick on the ground. Gross avoids any temptation to over-dramatize Canadian military life. His characters – particularly Travis (Allan Hawco) and Hickie (David Richmond-Peck) are finely drawn.

Hyena Road stands apart because it concerns the effect that the horrors of modern warfare.  They are the kind of people you might meet in the street, and Hyena road rings true because of it.