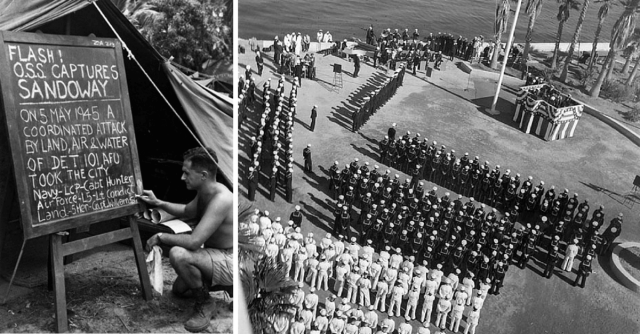 Pearl Harbor shook the fabrics of American society on multiple levels while pushing the decision makers to take actions to defend the nation from suffering huge damages. With US announcement of active involvement in the Second World War the residents of a small Island in the Pacific went through historic transformation. There was very little doubt in the minds of the ordinary Americans that a mainland Japanese invasion was inevitable, and nowhere was this notion more audible then in the military circles. The island of Santa Catalina in the Pacific saw a massive migration of the civilians soon after US was forced to plunge into the Second World War.

A recent exhibition dubbed ‘First Line of Defense’ is held at the Catalina Island Museum to shed light on the contribution of the Island in the War. The exhibition is curated by John Boraggina, which provides the detailed wartime history of the Island in the light of the recently declassified military documents, photographs and footages.

The fact that even today there are a large number of people, including some descendants of the wartime dwellers of the Island, are unaware of the historic significance of the Santa Catalina Island is the subject of the exhibition. It points out that although the Island saw a massive influx of military personnel, however what shrouded the Island in the mystery was a large-scale clandestine mission authorized by the US government.

The island underwent a major transformation and every aspect of the infrastructure was adopted by the military to assist the US Army in its training and strategic defense formations. Sports complexes were transformed into small and large shooting and training centers, while in tall buildings sophisticated radars and interception devices to keep a watch on another attack by the Japanese were installed. Although most of the ‘military take over’ of the Island was quiet visible to the local inhabitants, the hallmark of the Santa Catalina was the Clandestine operations held by the OSS (Office of Strategic Services now known as CIA).

Formed by the American President Roosevelt, OSS had the primary objective of working behind enemy lines and destroys the enemy from within. The Catalina terrain was ideal for the training purposes; its rugged plains provided the perfect ground for hardcore survival training, while there was no shortage of water to train the officers for amphibious assaults. A number of tough and challenging training tasks were prepared for the OSS officers including five-day survival in the jungle and mock attacks on heavily guarded installations, the KCET reports.

The exhibition ‘First Line of Defense’ has been given special correspondence by the top military brass that orchestrated and supervised the OSS training camps on Catalina. The collection of documentation and other relics from the World War II provide a detail glimpse on the origin and contribution of OSS to the Pacific theatre and World War as a whole.