Alexander is the quintessential Hollywood historical epic. It features grand battles and overly dramatic events aplenty. It was the subject of much controversy prior to and just after it was released, with many critical of the movie’s portrayal of Macedonians, Persians, factual accuracy, and sexuality.

During production, the film had access to a renowned professor of Greek history and classics, but the director, Oliver Stone, had his own vision for the film that occasionally and deliberately deviated from history. Overall, Alexander does several things historically right, with the understanding that many events are compressed in an effort to condense an already three-hour movie. 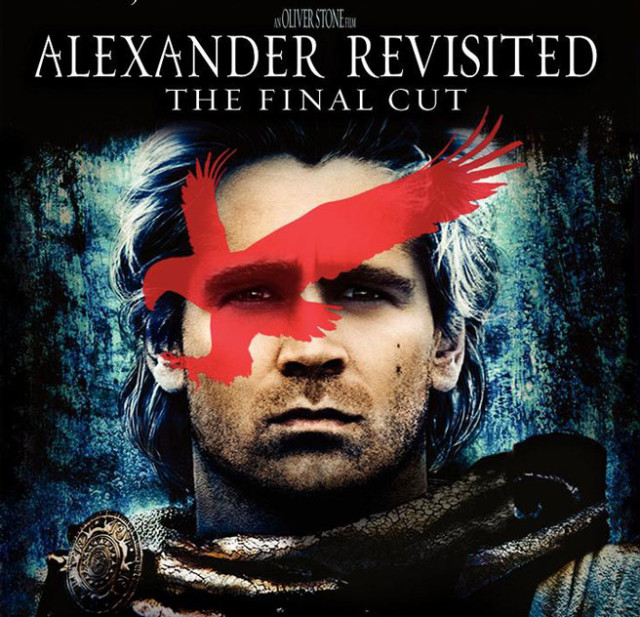 Ancient battles are very difficult to recreate on film. Getting the authentic weapons and armor for thousands of actors/extras is a headache as well as organizing thousands of extras. Alexander’s crew went above and beyond, drilling their mostly Moroccan contingent of extras to fight in the same manner as Alexander’s heavy infantry the hoplites and in the iconic phalanx formation.  The film’s portrayal of the battle of Gaugamela was incredible and largely accurate.

On top of that, it was quite a sight to see the phalanx, often discussed as an impenetrable wall of spear points, actually look vulnerable to the massive Persian charge and the later Indian elephant charge. It was indeed a formidable formation, but heavy pressure could break it down during a battle.

Also present was a quick view of the all-important but hardly mentioned skirmishers, throwing stones at men and horses from between the lines. They are not given much screen time, but they could have easily been left out completely to provide even more focus on the heavy infantry.

The minor details of the film are very well recreated. Many of the garments, jewelry, and decorations are copies from archaeological finds or recreations of mosaics. The city of Babylon was very well recreated, even including the Hanging Gardens, though historians aren’t really sure if they actually existed.

The Blue gate of Babylon we know existed. Alexander famously entered through it so it was nice to see in the movie. The movie could not hope to cover all of the events of Alexander’s action-packed life but the dialogue or few second shots cover a lot; from the proposed  plans of Alexander to invade Arabia, and a short shot showing the storming of the famous cliff fortress in Bactria in Central Asia.

Throughout the movie, there are lines or events that historically happened, but to fit them in the movie they were given to different people or located in different places. The Persian princess, Stateira, in Babylon mistakenly addresses Hephaestion as Alexander, but this actually happened when Alexander captured part of Darius’ royal family after the battle of Issus.

The same princess also was asked by Alexander how she wanted to be treated. This exchange is a modified version of an actual exchange between Alexander and the defeated King Porus after the Hydaspes battle, shown near the end of the film.

Though much more of an annoyance to Macedonians and Greeks than most, the movie carelessly uses the word “Greek” to refer to Macedonians, when Macedonia had actually conquered Greece. Greeks fought in Alexander’s army, but were distinct from the Macedonians.

Too often Alexander is said to be doing things for “Greece” when he is really doing them for Macedonia. It is almost comparable to having Caesar, after conquering Gaul, fighting in the civil wars in the name of Gaul. It just doesn’t work that way.

While the two set piece battles are excellent at showing the gritty, bloody business of ancient battles, the last battle against the Indians at Hydaspes is a little off. It was actually fought on a treeless plain by a river and not in a forest. Alexander would not have willingly sent his phalanx or his cavalry into a wooded area. He was also not seriously wounded here, but at a different battle (actually he was wounded at several other battles).

The films version of this battle is meant to emphasize the blood costs of the victory and that it marked the effective end of the invasion of India. Also, filming in a forest allowed for smaller, disjointed shots which were likely cheaper and easier to film, especially with all of the elephants involved.

Aside from those there are a few minor details that are dramatized or just wrong. The great Lighthouse makes a good backdrop for Ptolemy’s  narration at Alexandria, but it was not built quite yet. Alexander’s death seems almost certainly to have been due to  illness and not poison. It is implied that one, or all of his generals may have poisoned Alexander, but they would have been very unlikely to do so as none would be certain of their position in the ensuing chaos after his death.

The worst aspect of the films is just not showing several key aspects of the life and conquests of Alexander though this is quite the subjective argument. The great siege of Tyre, crushing the Theban rebellion, the battle of Issus, and many more are omitted in favor of showing the relationship of Alexander and his parents and his backstory.

Some more minor events make it in, such as the historical taming of Bucephalus, Alexander’s horse, but some glaring omissions, such as the story of the Gordian knot, fail to appear. Such a famous incident could have been covered in less than a minute of screen time, but is simply left out.

Lastly, the film, unfortunately, puts a huge focus on Alexander’s sexuality, putting a modern lens on the ancient concept of sexuality. In a time before widespread Christian sexual morals and values, sexuality and beauty transcended gender and it has often been said that the ancients appreciated beauty in all forms. Such concepts are incredibly difficult to understand and handle in our modern culture.

If Alexander had intimate relations with any of the people mentioned in the film it would not have been such a big deal for those around him. Aside from that, the sources are far from clear when it comes to Alexander’s actual sexuality and there is the only proof that he and Hephaestion were great friends. Putting such a focus on it was quite frankly a misguided waste of time when there were so many other areas of Alexander’s life and achievements to cover.

Overall, Alexander is a disjointed movie, even in the most extended version, but does an admirable job at portraying the history. The Battle scenes are excellent, considering that it was a  Hollywood production and intended for entertainment and not for education. Though some of the events are changed for the sake of the story  or are not quite right, the movie does a good job of “transporting” the viewer to the ancient world.