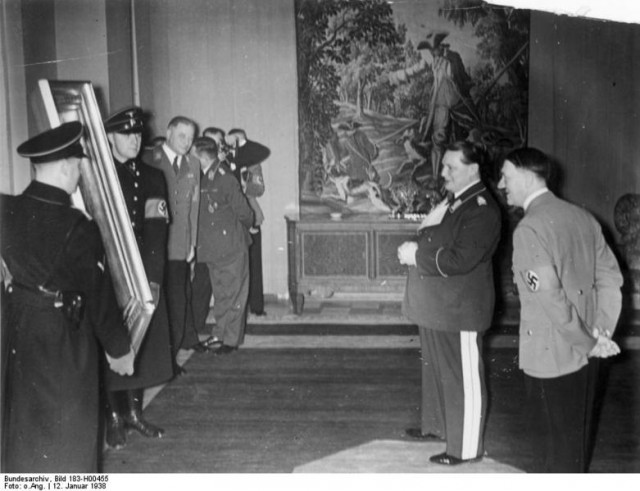 The right hand man of Adolf Hitler Herman Goering kept a very detailed catalogue of the stolen art masterpieces confiscated from the occupied Europe. For the first time in seventy years the detailed catalogue has been published for the public.

The Catalogue has been used by the Scholars researching the subject for over seven decades, and is kept in the Diplomatic Archives in France. Historians and academics have pieced together the immense collection of artworks found under Goering’s possession, utilizing the US war archives and Goering’s correspondence to his dealers.

The amount of information about the artworks found in the documents is remarkable to the last detail. The publishers ‘Flammarion’ have decided to publish the whole catalogue with every single detail mentioned in it under the title ‘The Goering Catalogue’. The publishers and historians are hoping that the publishing of the Catalogue could help further the battle to locate the rightful owners of the artworks confiscated during the Second World War.

Some of the most heinous crimes committed under the Nazi flag were exclusively authorized by Herman Goering who was second to the Fuhrer himself. However he had another hobby that he fulfilled to great lengths during the World War. Goering made it absolutely clear that every single precious artwork present in the Nazi occupied Europe must be brought to his country retreat outside Berlin named Carinhall.

Goering’s Catalogue of the Stolen masterpieces contains the information about some 1,400 artworks, including Botticelli, Durer, Renoir, and Monet. Catalogue also confirms that Goering had the possession of some 168 tapestries and more then 250 precious and historic sculptures. Carinhall’s walls were also decorated by the famous paintings like Van Gogh’s Bridge at Langlois and Velasquez’s portrait of the Infanta Margaret.

Whenever a Stolen Masterpiece would arrive at the doorsteps of Carinhall, a detailed handwritten memo had to be produced containing all necessary information about the masterpiece. The information included the origin of the piece, the owners and the details about the artists involved. Most of the artworks were confiscated from the wealthy Jewish families across the occupied Europe, The Telegraph reports.

Towards the end of the Second World War, when the Red Army was pounding its way into Berlin, Goering ordered his massive collection to be transferred to Bavaria and then to Austria. However Allies intercepted the cargo and sent the stolen masterpieces to Munich where every single piece was recorded by the US war archives department.