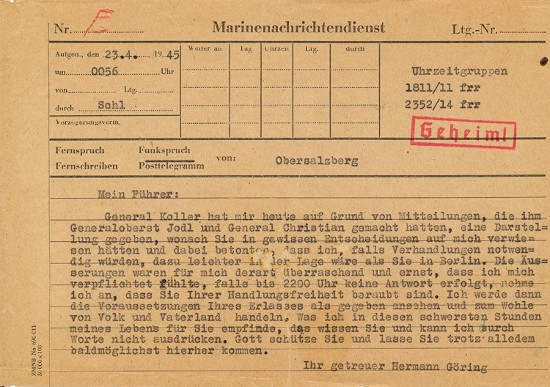 In the final days of World War Two, the Nazi leadership was in chaos. The Soviet Red Army was advancing from the east and Berlin was in their sights. From the West the British and Americans had crossed the Rhine and were racing through Germany.

It was April 1945 and Adolf Hitler had retreated to his underground bunker in the center of Berlin so that he could maintain leadership of the German armed forces from under the city.

Now, a transcript of Hermann Goering’s final message, a radio message, sent to Hitler has been uncovered and is being put on display at the Natick Museum in Massachusetts , USA.

The message was sent to Hitler overnight on 23rd April 1945. In the transcript, typed up in German, Goering tells Hitler that if he does not hear anything from him that he will take over control of the German parliament and army. Goering was one of the leading Nazi party members.

Hitler received the message and was furious. He rejected Goering and declared him as a traitor of the Third Reich and commanded that he be arrested. However, the end of Hitler was almost nigh and just seven days later he committed suicide.

The radio message transcript is being added to a display in the Natick Museum which documents the end of World War Two. The museum’s director said that for the Allies this was such an interesting part of the war – how the Third Reich fell apart.

The message shows that Goering was angry towards Hitler and had turned on him. The museum bought the transcript at an auction for just over $50,000 at the beginning of July, it achieved more than double what the document had been estimated to sell for.

The document had been kept in the belongings of Martin Bormann, Hitler’s private secretary, and records show that it is likely to be the exact document that was read to Hitler when the message was received. It was another blow to the Nazi leaders downfall, as the internal leadership was crumbling around them along with their troops against the Allies and Soviets, The Boston Globe reports.

The document came known in the 1960s and has had various owners since then. Other items on display at the museum linked to the end of the Third Reich include memos written by Albert Speer where he stated that the Germans had lost the war and that its cities must be protected, as well as a memo from Hitler stating that the Nazis must continue to fight, showing that Hitler would never capitulate. The museum also has parts of the blue sofa that Hitler and Eva Braun committed suicide on.