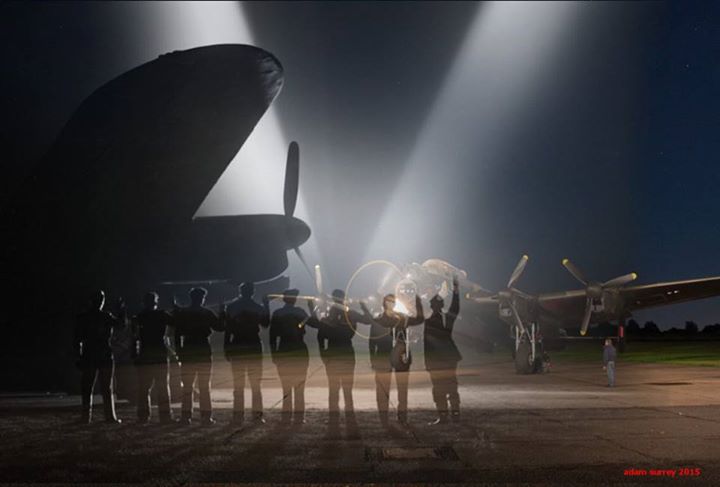 Haunting images take you on a trip of time travel, combining historical photographs with their modern-day settings. 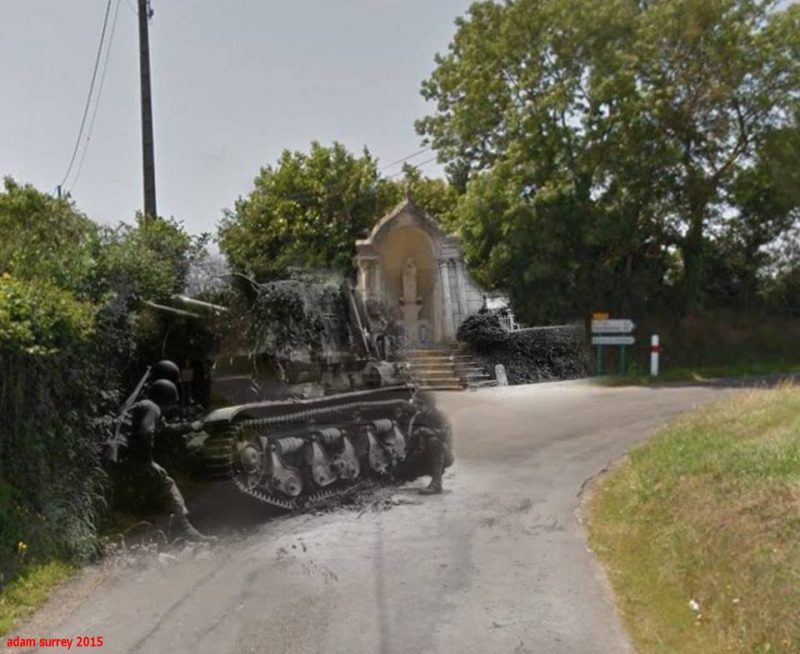 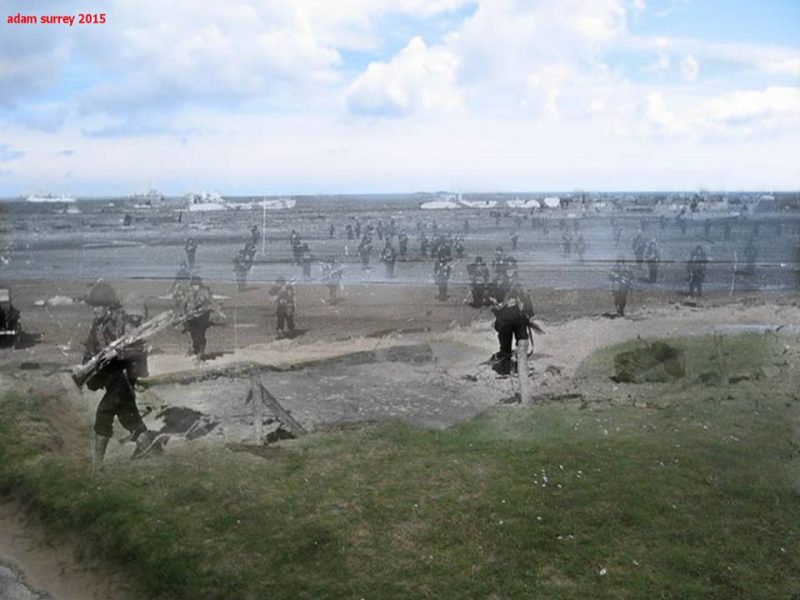 New arrivals: In the days and weeks following D-Day,more US troops arrive on Utah beach 1944 – 2015 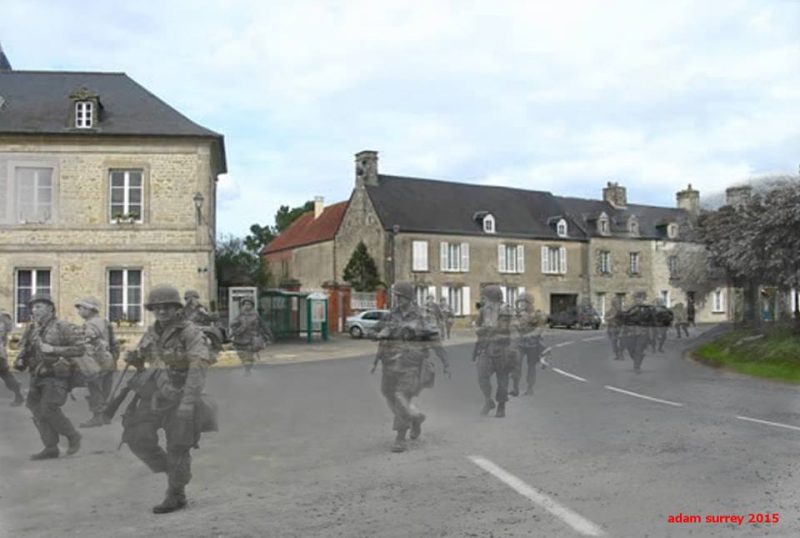 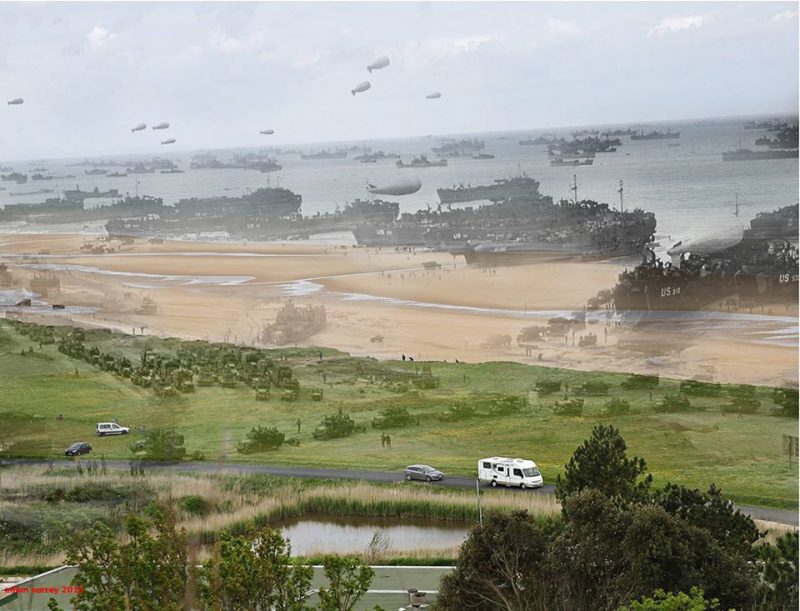 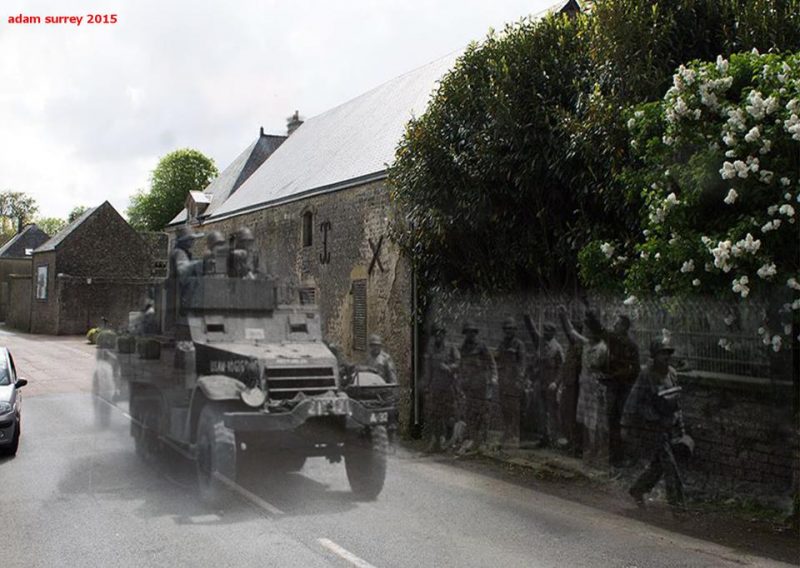 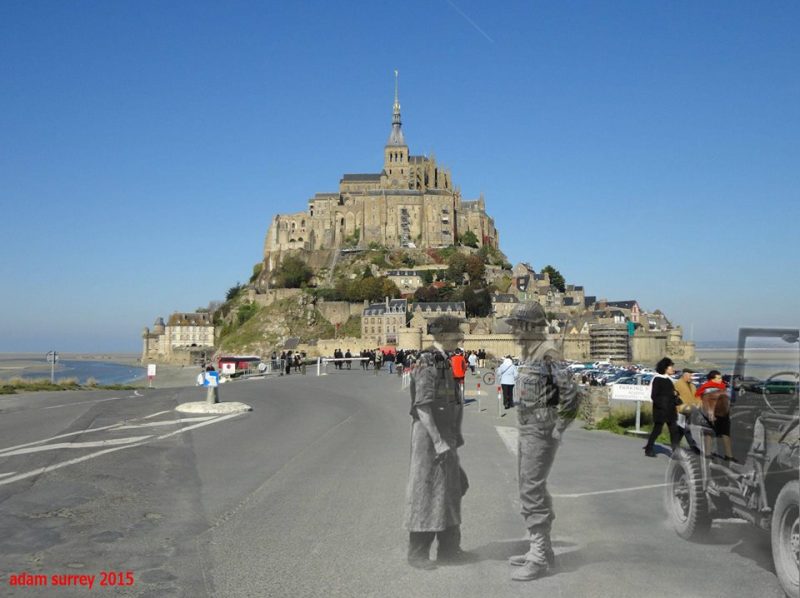 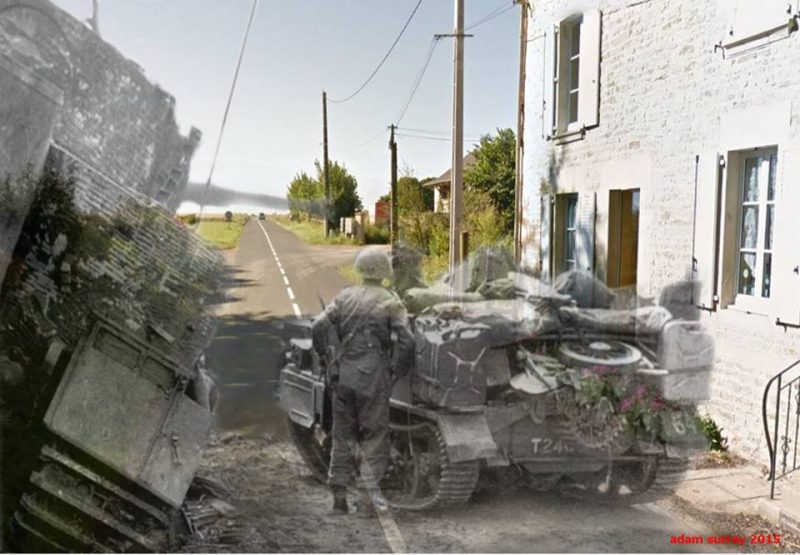 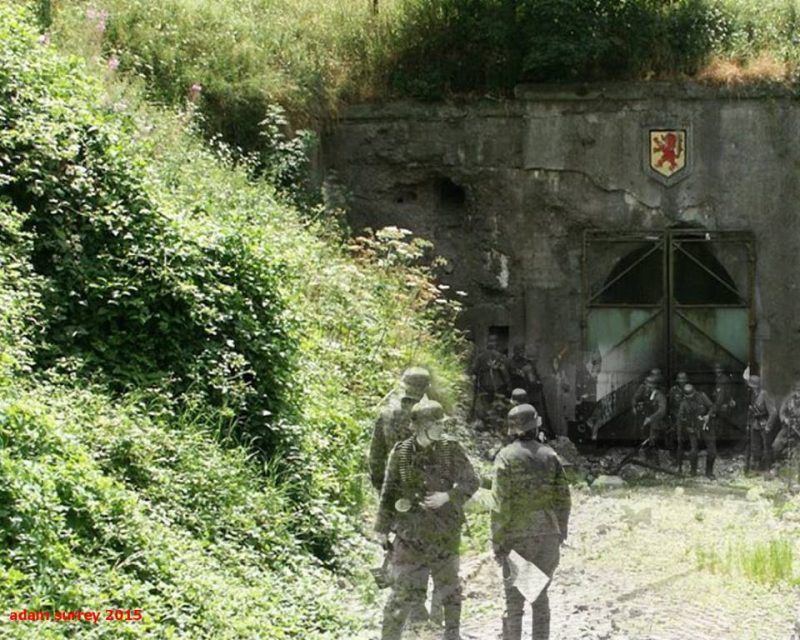 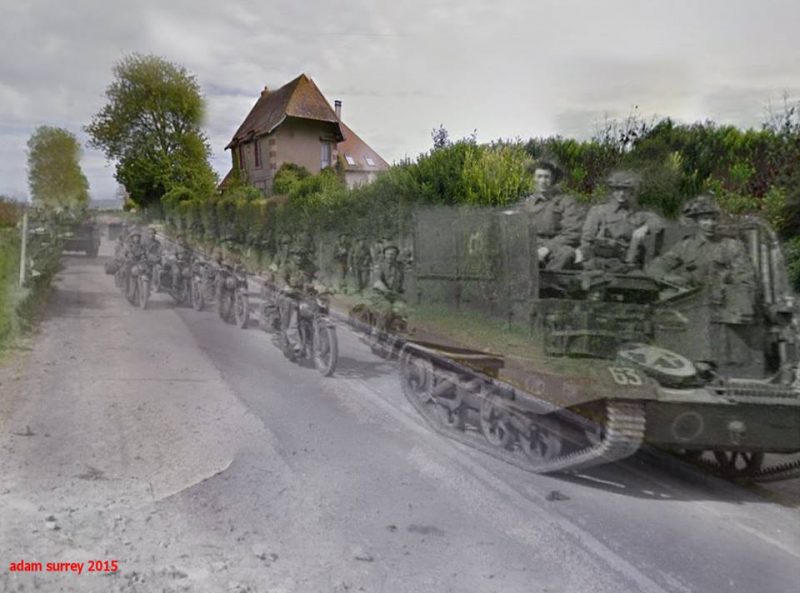 Universal carriers and motorcycles driving inland from Arromanches during the build-up of Allied reinforcements in the bridgehead, 22 June 1944 -2015 (in reality its Route du Débarquement
Saint-Côme-de-Fresné) 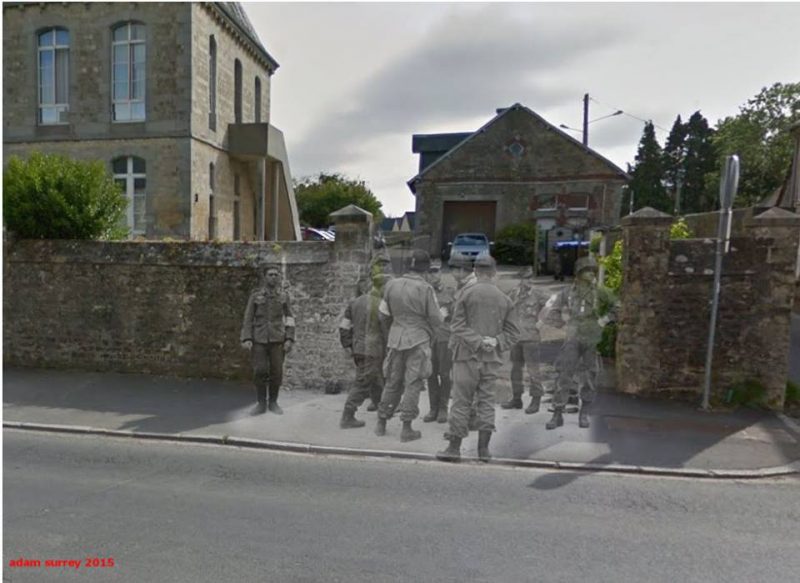 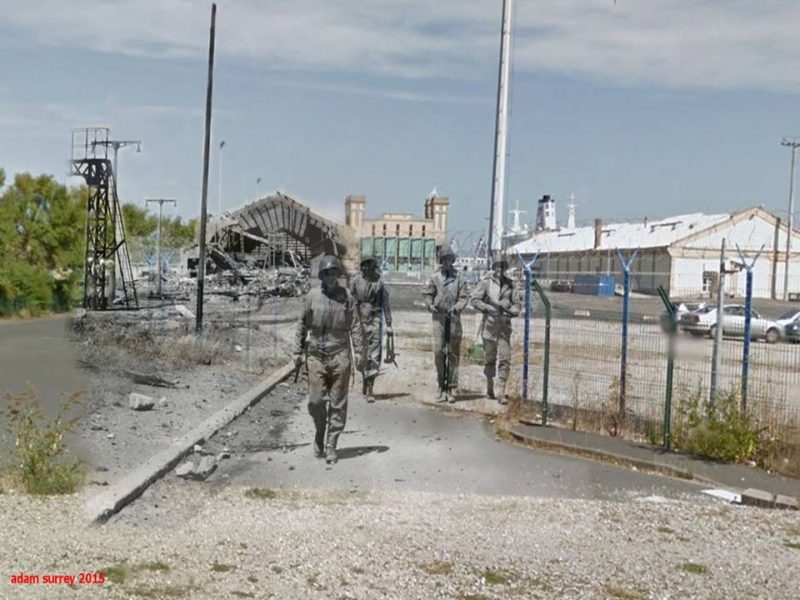 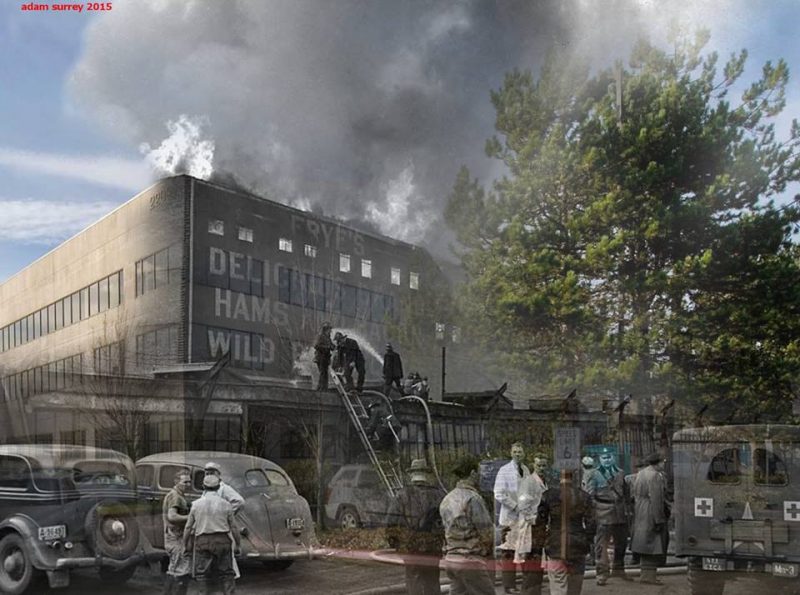 Firefighters and other emergency personnel respond to the crash of a B-29 prototype at the Frye Meat Packing Plant,Seattle . A total of 32 died on the plane and in the fire. Feb 1943 – 2015 (the present building was built on the same footings as the original) 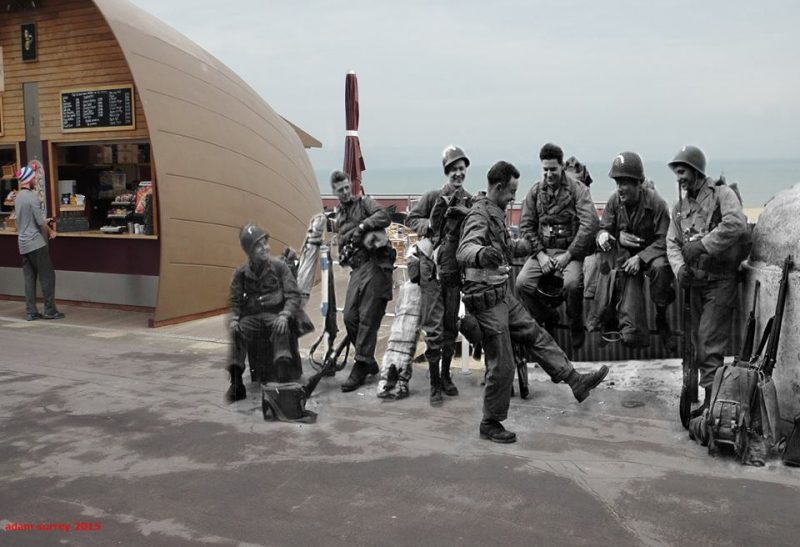 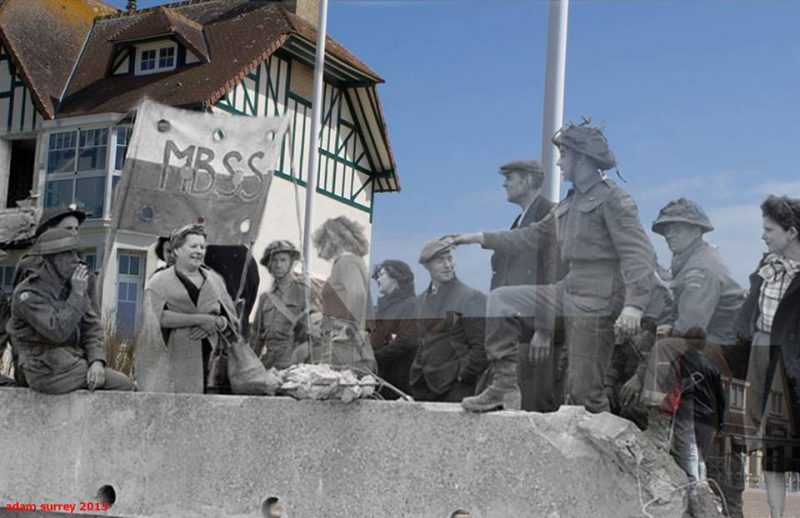 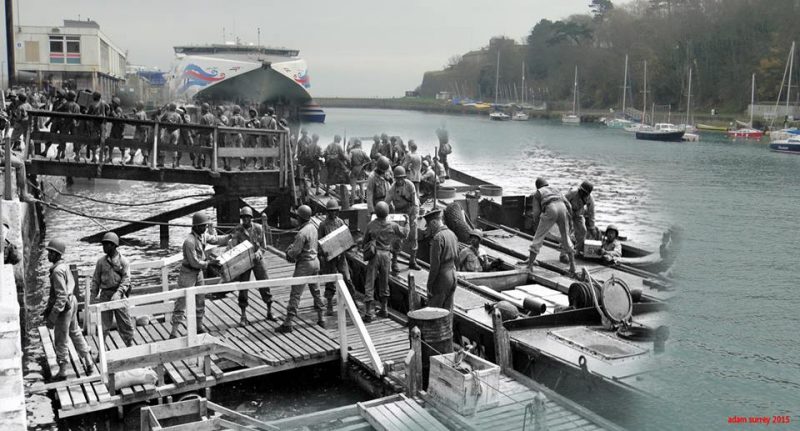 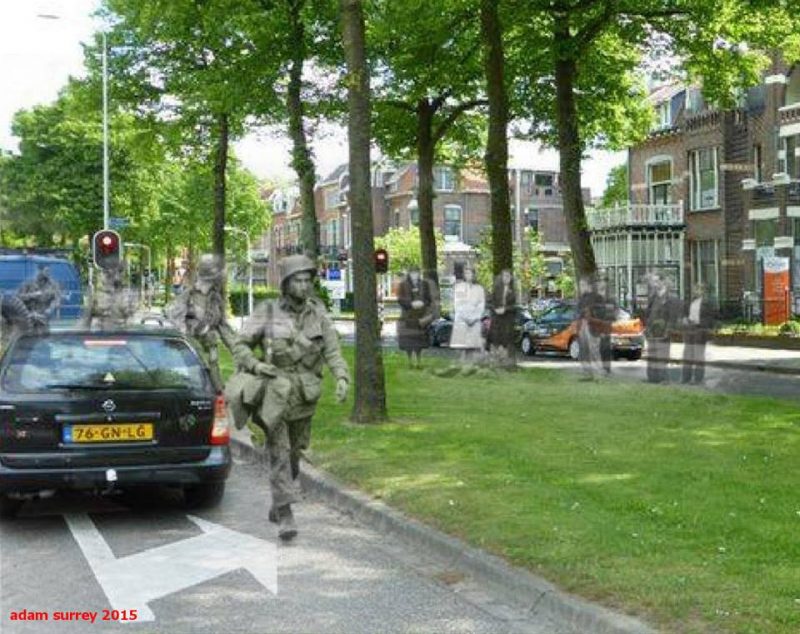 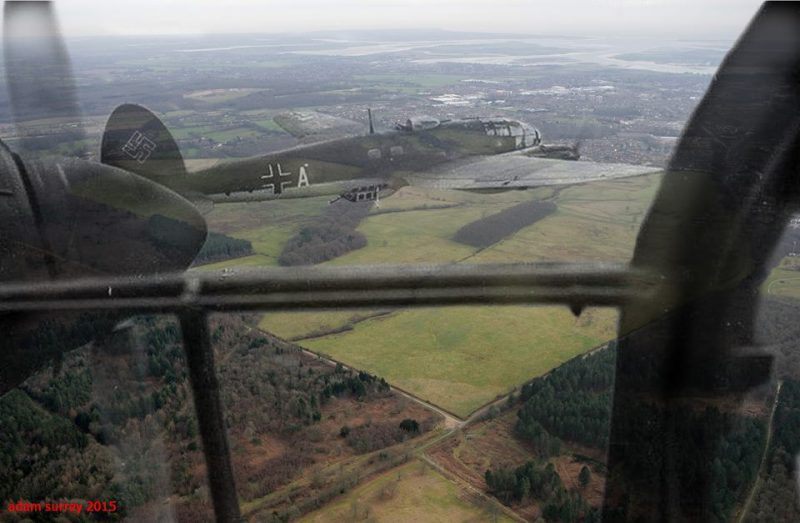 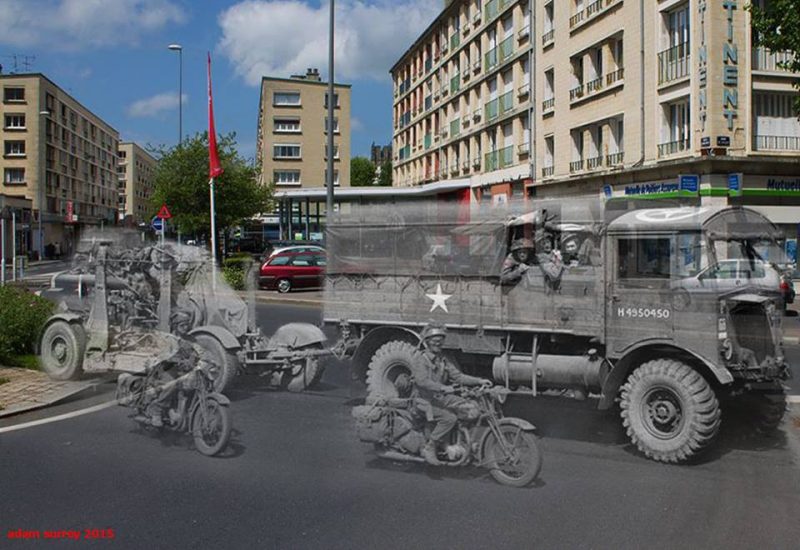 A truck pulling a 3.7 inch anti-aircraft gun moves along the Quai de Julliet in Caen. In the distance can be seen the Abbaye des Hommes. 1944 – 2015 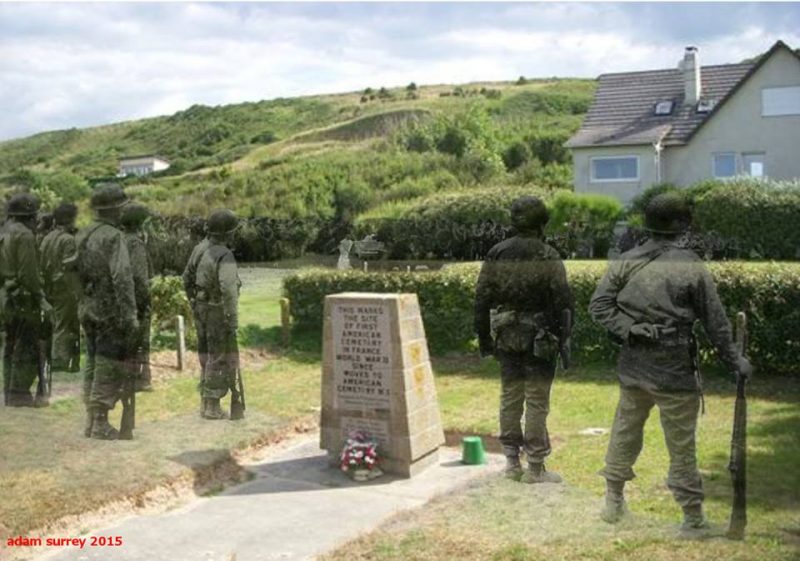 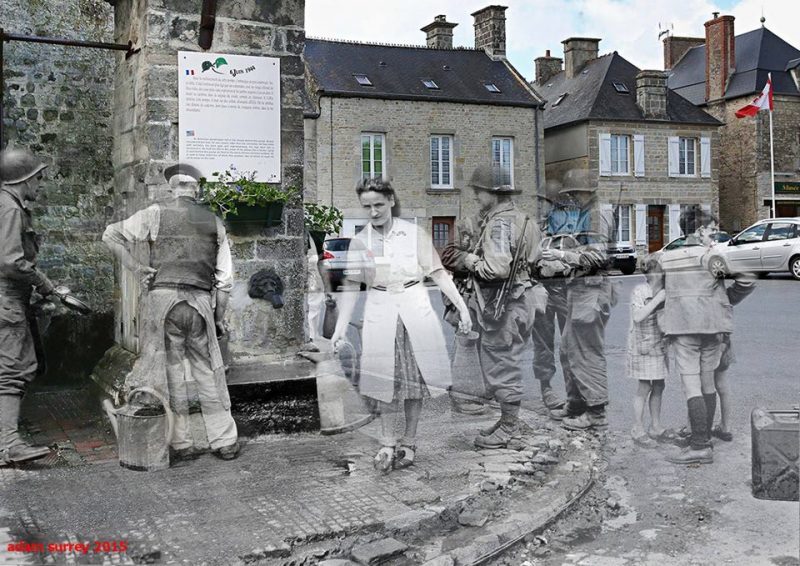 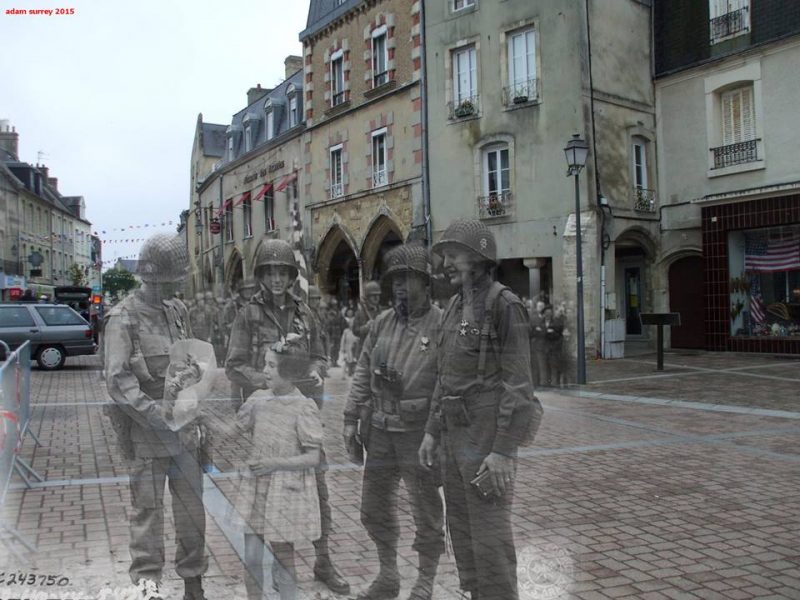 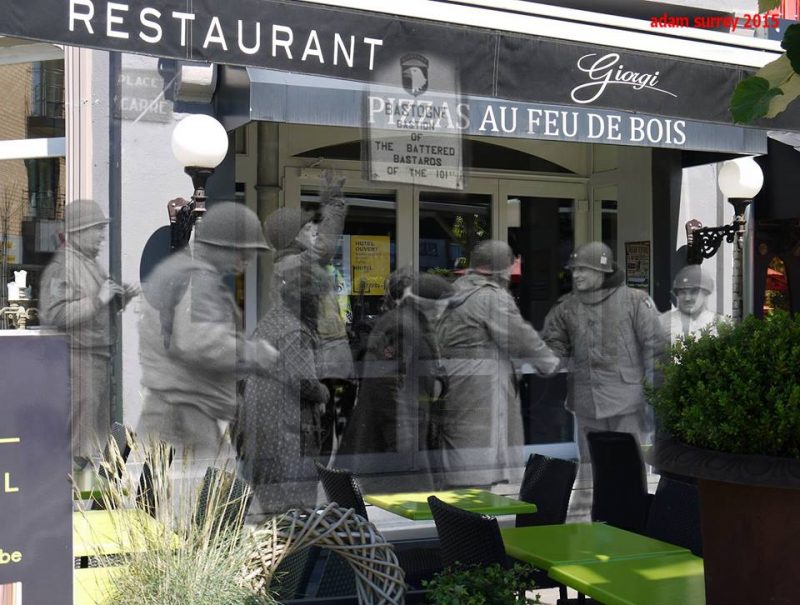 Relief:US troops meet at the corner of what is now Mcauliffe Place,Bastogne .1944 – 2015 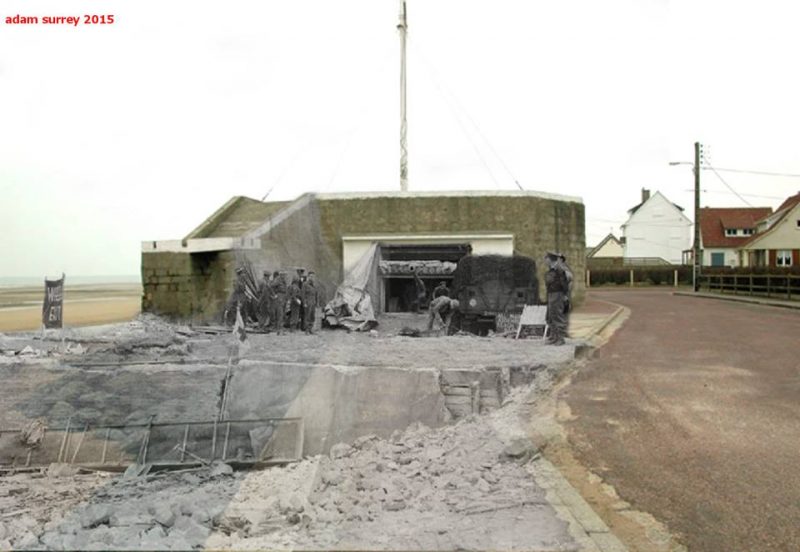 WN33:The British 2nd Army: Royal Navy Commandos of LCOCU (Landing Craft Obstacle Clearing Unit) examine a large casemate and its 88mm gun which formed part of German strongpoint WN33 on the western edge of La Riviere, and which caused the forces landing on ‘King’ Beach, GOLD Area considerable trouble before it was silenced. 1944 – 2015 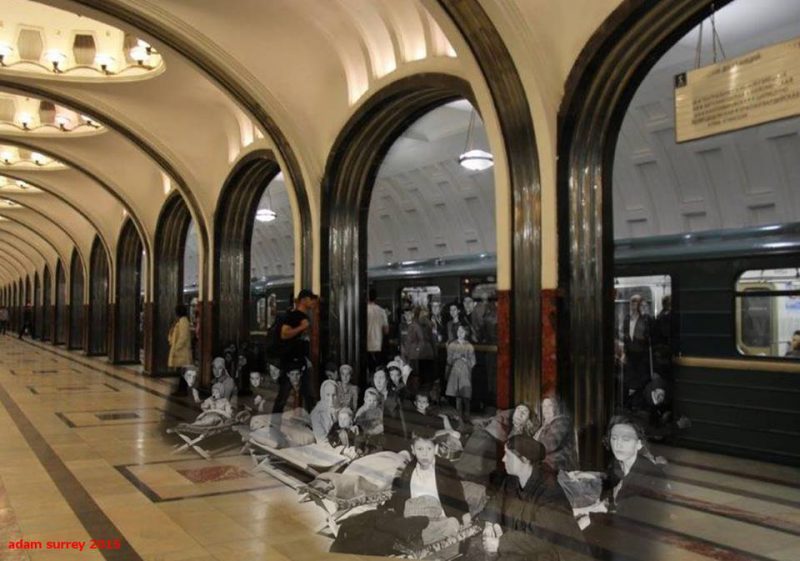 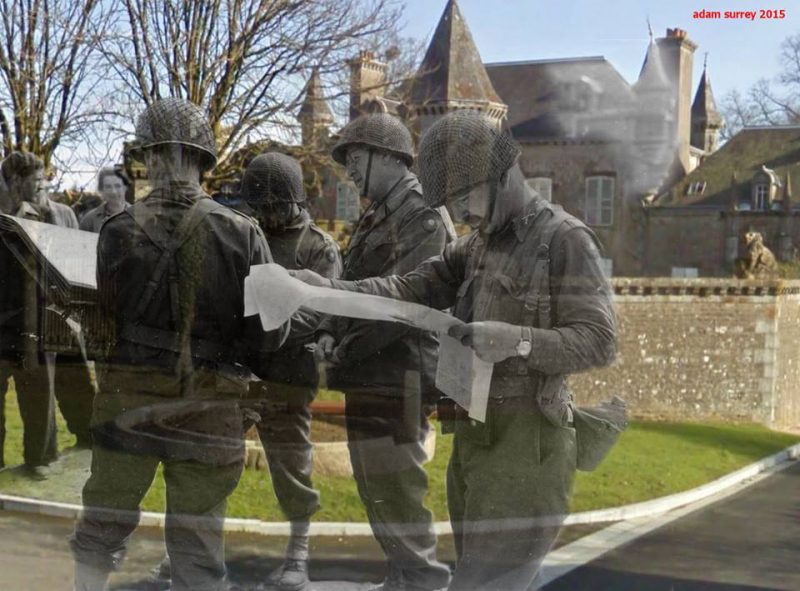 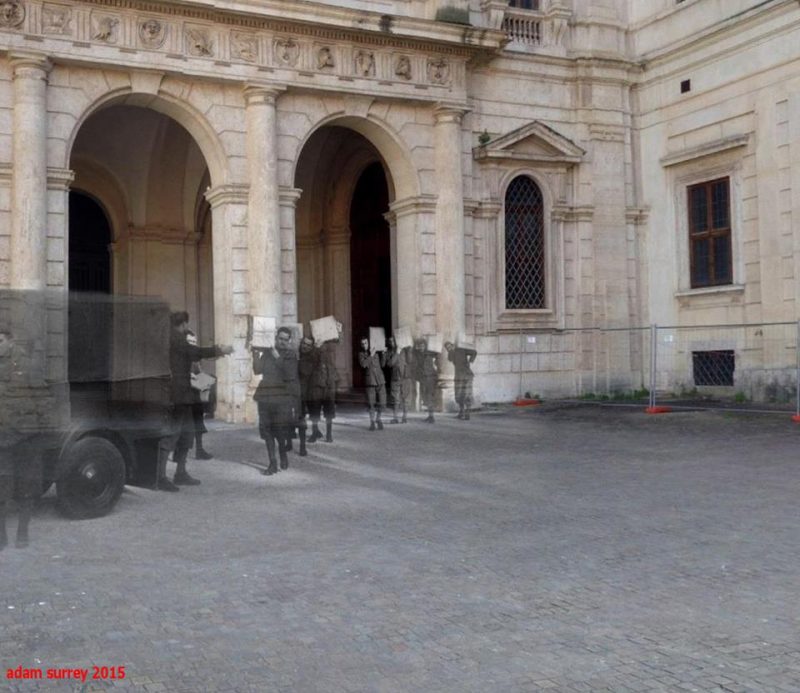 The late fine was huge: Italian soldiers requisition library books from the Library of Palazzo Barberini for reading material to be sent to Italian soldiers on the front lines. Rome, Italy. 1941 – 2015 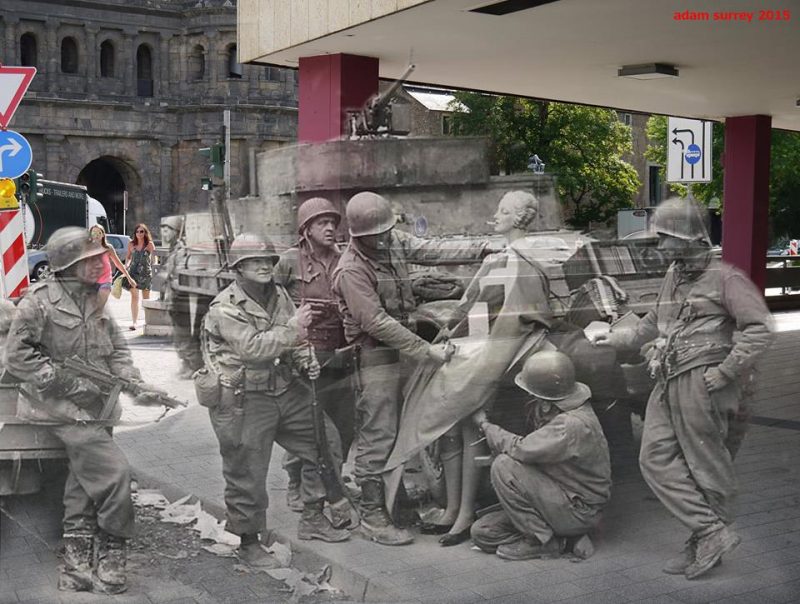 US troops dress a shop dummy in a German flag,close to the Roman Gate of Porta Nigra,Trier ,Germany 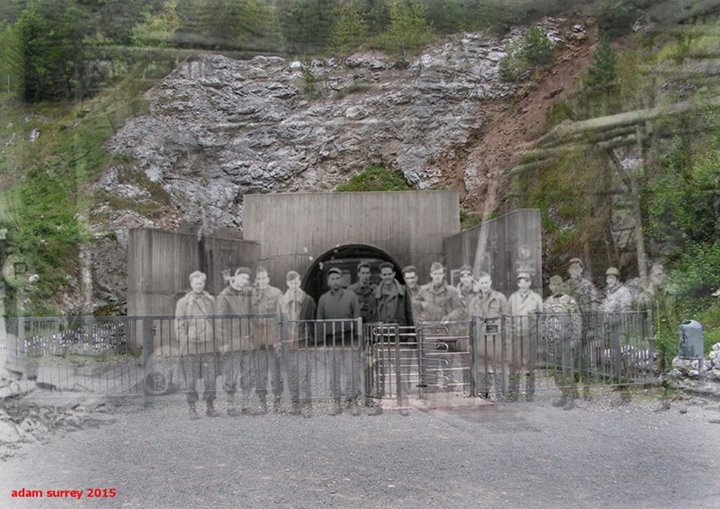 US Airman inspecting V-1 factory. The Mittelwerk occupied large tunnels underneath a mountain near Nordhausen in the Harz Mountains in central Germany 1945 – 2015