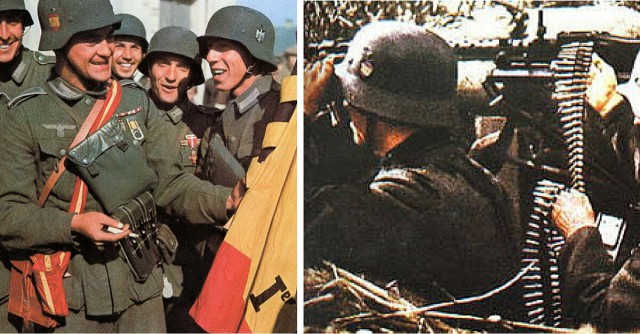 In 1962 Germany came to an agreement with the Spanish dictator, Francisco Franco, that Germany would support volunteers that signed up to fight for Hitler, and against Russia, in the years between 1941 and 1943.  Nazi Germany and Mussolini’s Fascist Italy had helped Franco to win the Spanish Civil War in 1939 and at the end of the war Franco did not bring Spain into the war but he did permit volunteers to sign up to Hitler’s forces, provided they fought only against Russia.

In 1941, 47,000 volunteers enlisted in the División Española de Voluntarios, or Blue Division, and fought for Nazi Germany on the eastern front against Russia.   German estimates of the casualties suffered by the Blue Division were 22,000 killed, wounded or declared missing in action during the war – numbers that are contested by other sources, who put Spanish casualties at 5,000.

On 31 July, after taking the standard personal oath to Hitler, under whose authority they were to be fighting, the Blue Division was formally incorporated into the Wehrmacht as the 250th Division. It was initially assigned to Army Group Center, the force advancing towards Moscow.

The division was transported by train to Suwałki, Poland (August 28), from where it had to continue by foot on a 900 km march. It was scheduled to travel through Grodno (Belarus), Lida (Belarus), Vilnius (Lithuania), Molodechno (Belarus), Minsk (Belarus), Orsha (Belarus) to Smolensk, and from there to the Moscow front. While marching towards the Smolensk front on September 26, the Spanish volunteers were rerouted from Vitebsk and reassigned to Army Group North (the force closing on Leningrad), becoming part of the German 16th Army.

The Blue Division was first deployed on the Volkhov River front, with its headquarters in Grigorovo, on the outskirts of Novgorod. It was in charge of a 50 km section of the front north and south of Novgorod, along the banks of the Volkhov River and Lake Ilmen. According to the museum curator in the Spasa Preobrazheniya church on Ilyin Street, the division used the high cupola as a machine-gun nest. As a result, much of the building was seriously damaged, including many of the medieval icons by Theophanes the Greek.

In August 1942, it was transferred north to the southeastern flank of the Leningrad siege, just south of the Neva near Pushkin, Kolpino and Krasny Bor in the Izhora River area.

After the collapse of the German southern front following the Battle of Stalingrad, more German troops were deployed southwards. By this time, General Emilio Esteban Infantes had taken command.

The Blue Division faced a major Soviet attempt to break the siege of Leningrad in February 1943, when the Soviet Army 55, reinvigorated after the epic victory at Stalingrad, attacked the Spanish positions at the Battle of Krasny Bor, near the main Moscow-Leningrad road. Despite heavy casualties, the Spaniards were able to hold their ground against a Russian force seven times larger and supported by tanks. The assault was contained and the siege of Leningrad was maintained for a further year. The division remained on the Leningrad front where it continued to suffer heavy casualties due to weather and to enemy action. When Franco dispatched more reinforcements, this time it included conscripts as well as volunteers.

Through rotation, as many as 45,482 Spanish soldiers served on the Eastern Front. They were awarded both Spanish and German military awards, and were the only division to be awarded a medal of their own, commissioned by Hitler.

This agreement and the pension costs to the German economy associated with it were highlighted in a written reply to a parliamentary question raised by left-wing MP Mr Andrej Hunko.  The reply stated that on an annual basis the German government support for the old Blue Division still covers 41 veterans who were wounded, eight widows of former fighters, and one orphan, at a total cost of €107,352, The Telegraph reports.

Mr. Hunko, a member of The Left (Die Linke) party, was incensed, saying it was “a scandal that 70 years after the war, Germany is still paying more than €100,000 a year to Nazi collaborators.  At that time, those people volunteered to join the German fascists to fight on their side in the war of extermination in Eastern Europe”.

He then went on to say that “For me it is incomprehensible that the German government should stick to those payments when so many victims of the war are still waiting today for their rightful compensation”.