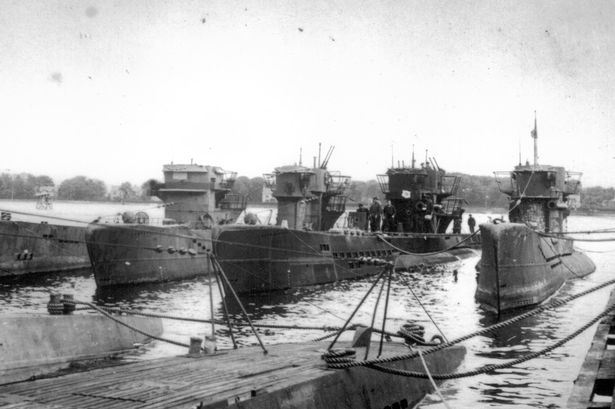 Some of the German U-boat fleet in Loch Eriboll after surrendering, 1945. [Via]

A Scottish historian has uncovered a little known piece of history about the surrender of German U-Boats at the end of World War Two.

1945 the biggest fleet of German submarines gathered in a small loch in the far north of Scotland as they surrendered to the Allies. Loch Eriboll is a remote location on Scotland’s north coast and with deep waters ideal for anchoring the submarines it was the perfect location for the U-Boats to surrender. The isolation also meant that the humiliation for the commanders would be lessened.

While historical records had shown that only a few U-Boats gave themselves up at the loch, this latest research shows that many did in fact give themselves up here and that some of them were the most feared and successful of the German navy.

Many of them hunted the Atlantic waiting to destroy not only Allied military ships but any supply and merchant vessels. The German U-Boats were the curse of the Atlantic and killed thousands of Allies and sank hundreds of ships.

The research has now been converted into a book called ‘The Grey Wolves of Eriboll’. The book states that the most senior officer at the U-Boat surrender was Junker who had commanded the U-532 U-Boat. He had been with that submarine since it had been commissioned in 1942 and continued to serve on her right up to the surrender.

When he surrendered with his crew, Allied authorities found that he was quite arrogant and was vocal about his fascist views.

It turned out that Junker thought that the German’s surrender was just a ruse so that Germany and the Allies could together launch an attack on Russia.

He was told to take his crew and U-Boat to Liverpool where they were apprehended.

It is thought that more than 30 of the German U-Boats ended up surrendering at Loch Eriboll. One of them was used only as a storage unit for wine, which was distributed amongst the rest of the U-Boats when it came into contact with them.

Junker’s own U-Boat had just returned from Asia and carried with it supplies to support the German’s war effort. The book also brings to life the stories of individual crew members on the submarines, each having their own unique story to tell, the Daily Record reports.

One radio operator was arrested when his crew surrendered and was imprisoned for three years until he was sent back to Germany. But on his return to his home country he came under scrutiny from Communist authorities for his involvement in an attack on Russia during the war. He made it to the western controlled area of Germany but decided to make the journey back to the UK and became a British citizen in the mid-1950s.