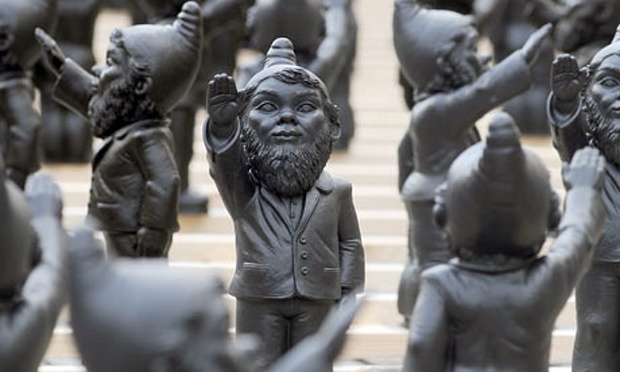 An unusual sight greeted people one morning in 2009 in a town in southern Germany. Upon reaching the town centre they found it had been populated by more than a thousand garden gnomes. The statues stood some 15 inches high and were aligned in a rank-and-file formation which gave the impression of a military parade. Most of the gnomes were painted black.

More remarkable still, all these gnomes were giving the “Heil Hitler” Nazi salute, each presenting an outstretched arm in the characteristic stiff-arm gesture of respect and deference to the Fuehrer.

This mass gathering of 1250 garden gnomes, with their startling gesture, quickly drew a crowd of gaping onlookers. The setting was a square in the middle of Straubing, where across the old paving stones a lattice of wooden slats had been constructed to provide a supportive foundation for the little statues. Straubing is an attractive old town in the southeast region of Bavaria. The town is well known for an enormous summer fair.

The parade was the brainchild of Mr Ottmar Hoerl, a local artist. When asked why he had created and installed this striking piece of public art, he replied that he hoped it would get the townsfolk and visitors thinking about the present and the past, about place and people. He had named his artwork “A Dance with the Devil” and announced that it represented signs of a sickness in politics – expressing his concern at the growth of extreme right-wing sentiment across Europe, The Telegraph reports.

After the Second World War, the display or promotion of all symbols of the Nazi party, including the Heil Hitler salute, were made illegal. The artist was therefore at risk of falling foul of the law. However, he declared that his collection of little gnomes, far from honouring the Nazis, was in fact heaping ridicule on them.

An art gallery in the city of Nuremberg had earlier in the year put another of Mr Hoerl’s gnomes, similarly saluting and coloured gold, on display.

Many German people love to include a garden gnome or two in their gardens or on their terraces. It is said that there are between 20 and 30 million of the little statues in the country.