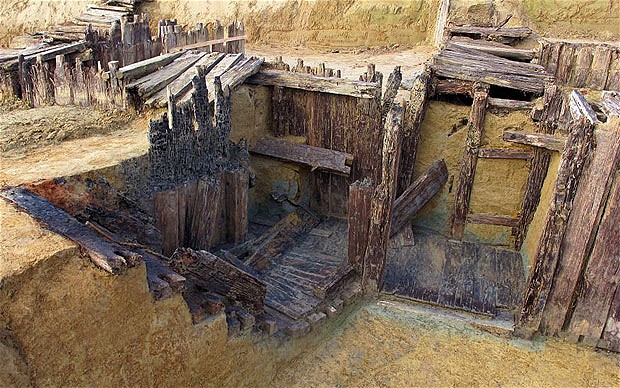 In 2012, during a road-building project near a small French town Carspach in Alsace region, excavation team stumbled upon one of the most amazing and somewhat rare discoveries.

A WWI tunnel built by the German troops has been discovered and almost fully preserved bodies of the German soldiers have been removed from the tunnel. A number of experts are talking about the resemblance of this latest discovery with Pompeii. Primarily because the bodies of the soldiers were not only perfectly preserved, they were also found in normal positions.

A number of soldiers were found sitting upright on a desk, while one of the soldiers was lying in his bed. Another body was found under the stairs, it is assumed that he must have been thrown down by the blast.

Along with the bodies, excavation also discovered a number of everyday items used by the soldiers in the tunnel. Recovered items include soldiers’ helmets, boots, wine bottles, weapons, wallets, spectacles, cigarette cases, pipes and some books. The remains of a goat were also discovered, which according to the experts was the source of fresh milk for the soldiers, The Telegraph reports.

According to the archeologists, the reason behind the preservation of the bodies is the fact that no air or water could enter the tunnel. Due to the impact of the blast right above the tunnel, soldiers were buried under tons of sand along with their items. The tunnel was very strong and critical for the Germans against the allies, 300ft long and 18ft deep tunnel with the capacity of harboring 500 soldiers at a time, provided perfect cover and strategic support to German troops.

The tunnel was the house for the 6th company of 94 Reserve Infantry Regiment, and at the time of the blast some 34 soldiers were present inside the tunnel. The names and identities of all the soldiers have always been known, but only 13 bodies were recovered.

The remaining bodies have been successfully retrieved from the tunnel and are now under the custody of German War Graves Commission. GWGC is planning to bury the bodies of WWI soldiers at German War cemetery in Illfurth, unless relatives claim the remains of the soldiers.