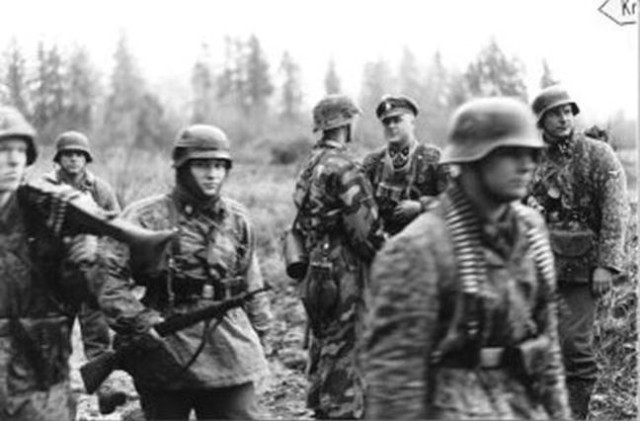 Officials in Germany have raided and searched three houses that belong to former Nazi SS members.  The raid is part of an investigation into their actions during World War Two, each of whom is thought to have been involved in a massacre in Northern France more than 70 years ago.

The German Prosecutor Andreas Brendel authorised German police to search the three homes this week. Two are situated in Saxony and the third in Lower Saxony. Amongst the items removed from the property were documents, photos and other evidence.

All of the men are reported to be in their 90s and were members of the 12th SS Panzer Division and ‘Hitler Youth’. They are believed to have been responsible for murdering 86 men in the French village of Ascq in 1944.

The 12th SS Panzer Division Hitlerjugend set out by rail for Normandy at the end of March, 1944. On 1 April, their train was approaching the gare d’Ascq, a critical juncture where three railroads intersected, when an explosion blew the line apart, causing two cars to derail. The commander of the convoy, SS Obersturmführer Walter Hauck, ordered troops to search and arrest all male members of the houses on both sides of the track.

Altogether 70 men were shot beside the railway line and another 16 killed in the village itself. Six other men were arrested, charged with bomb attack after an investigation by the Gestapo, and finally executed by firing squad.

At the end of the war, some SS men stood trial in a French Military Court at Lille. They were sentenced to death; later their sentences were commuted to imprisonment. The last prisoner Walter Hauck was released in July 1957. Hauck also instigated a similar massacre in Leskovice in May 1945.

After the massacre, 60,000 workers started a strike in Lille — which is one of the most important demonstration in France during the World War II under German occupation — and minimum 20,000 people were present at the funerals in the village.

The three men have all admitted to being members of the division, but have all denied accusations that they were there during the massacre.

The investigation continues and to date no charges have been brought forward.