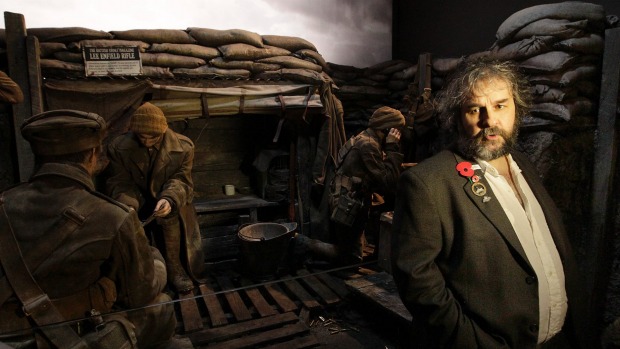 Famous movie director Peter Jackson has opened a new World War One exhibition in his home of New Zealand. The ‘Great War Exhibition’, based in Wellington, has been put together to bring World War One from black and white to color. It will be held at the Dominion Museum and is free to the public.

Massive color photographs portray what life was like in the trenches and on the frontlines. The photographs taken during the war 100 years ago had originally been black and white. Now the images have been specially selected for the exhibition and color has been added by Peter Jackson’s special effects company.

Peter says that he wanted to bring World War One to people in color, not just black and white since the color can really bring out the detail in the photographs.

Peter is himself an expert on World War One and has spent many months working on the museum project, after finishing his famous Hobbit trilogy.

The exhibit will feature new sections as each special 100-year anniversary of World War One battles comes up. The first display will be a Gallipoli exhibition that will start on the 25th of April, 2016.

Peter says that he’s been interested in World War One ever since he was a small child; he would listen to his grandfather and great uncles talk about the war, since they all fought in it. He would also watch films about the war, including All Quiet on the Western Front.

Peter wants the exhibition to be a journey for its visitors; he’s interested in telling them a story about different elements of the war, rather than just relating facts. Ideally, he would like people to understand the foolishness of war and also the courage and bravery of the soldiers.

18,166 lives were lost as part of New Zealand’s involvement in the First World War and this figure represents a loss so significant that New Zealand had more people per capita die in the conflict than was the case for any of the other dominions of the time.

The campaign at Gallipoli is immortalized in our history as are the Western Front engagements that New Zealand was involved in. These were hard attritional battles. For instance, 2700 New Zealanders were killed or wounded in one ghastly half day at Passchendaele. This particular campaign is arguably New Zealand’s worst ever disaster and all of the disasters suffered by the post 1840 nation of New Zealand added together do not rival it for scale of loss.

Peter hints that World War One was, in fact, useless since there was no real meaning to it. On the other hand, it drove science and technology advances, such as moving on from horses to tanks to planes, further than ever before.