Just recently at a Bonhams auction, one of the last few Enigma machines known to be still in existence has been sold.  Alongside the Enigma machine was a handwritten manuscript by Alan Turing, which alone went for over one million dollars. The Enigma machine sold for $269,000.

The machine, used in World War II, has a three rotors.  It was manufactured by the German military in Berlin in July 1944.  Although it saw extensive use in the war, it is in excellent condition and still works as well as it did during the battle.

Enigma machines were known then as one of the most sophisticated devices for making encryptions.  The Germans relied on these machines to send coded messages to fleets spread across the world.  Although Morse code was easy to decipher, the Enigma proved to be well more difficult.  British armies were determined to break the Enigma codes, and eventually broke one encryption that contained plans of the German army.

However, combined with the allure of Hitler and the effectiveness of his U-boats, the Enigma machine was for some time thought to be unbeatable.

Turing’s manuscript sold for so much because of what he brought to the British side during the war.  He was the one who managed to succeed finally in breaking some of the Enigma’s encryption.  Today, Turing is still known for his work on the basis of computer science.

The reason why Enigmas are so important is because they were not only a turning point in the war, but they also brought ideas to inventors who went on to develop the computer.  Without Enigmas, people may not have computers at all. lthough Turing never allowed people to delve into his personal life, his great feat in breaking the codes brought him much fame. 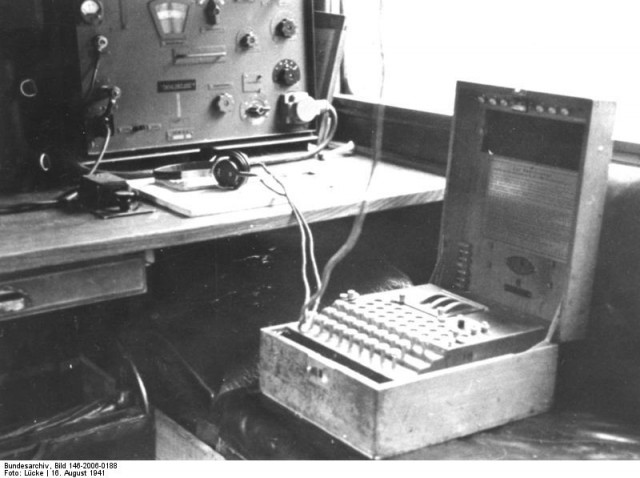 A little history about the Enigma machine: its use began in the 1920s when it was originally designed for the business market.  After a message was typed on it, the machine, generated by rotors and an electric circuit, would scramble them up into a code.  In order to decode a message, the recipient needed to know the exact settings of the wheels on the Enigma.  The Germans used new plugs, circuits, and features to the machine to throw off the enemy even more.

During the war, the Polish came the closest to cracking the code before Turing did it.  Due to the close engineering industries of Germany and Poland, the Polish were better able to decipher and reconstruct the Enigma. One man eventually cracked the Wehrmacht’s code between the years of 1933 and 1938.

In 1939, Poland realized that there would be a German invasion at any time now and decided to share its information with the British.  With the information from Poland, the British sent the Enigma codes to the Government Code and Cipher School in Buckinghamshire.  Mathematicians and experts then began to study the styles and codes.

Although the German believed their Enigma codes were unbreakable, they were proved wrong.  The British experts managed to break a code during the 1940 Norwegian campaign. They then successfully gained information about the possible invasion of Greece and the Italian naval plans for the Battle of Cape Matapan.

The Germans were also able to successfully break some of Britain’s code about their navy in 1935.  After America had learned this, the army changed their codes, but it proved to be too late.  The Germans had already deciphered the code and begun sending their U-Boats to America’s east coast.

This is exactly why the Enigma machine proved to be a very valuable tool in the war and a more valuable piece of history today.  This simple machine scared both the Allies and their opponents.

It is truly a powerful machine when used correctly. Thankfully, there were people who cracked the code – who knows what would have happened in World War II if it had been otherwise. (History)