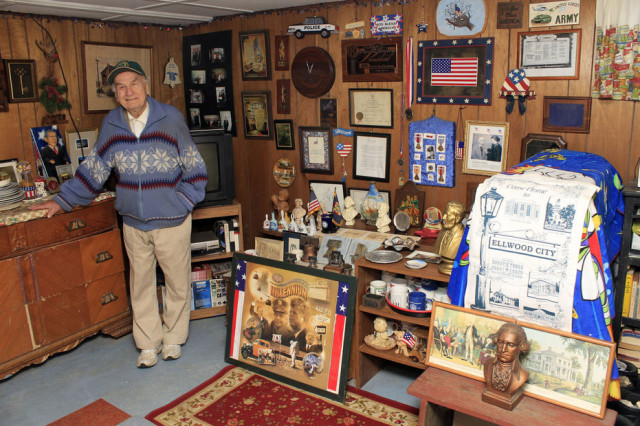 An Ellport, Pennsylvania, local and World War Two veteran has told his story of being part of General MacArthur’s Sixth Army in the Pacific theatre of war.

Nick Risko is now 92 years old, and joined the US Army back in 1943. He recalls how he almost died during the Battle of Leyte Gulf when he was serving on a troop ship and was just about to land on the island’s beaches. A Japanese kamikaze pilot drove his plane into Nick’s ship, but luckily Nick was on the other side and survived the collision.

He recalls how it was chaos with men lit on fire, hundreds were injured and around 120 died. Nick says that if he had been on that side of the ship, he would have been killed. All of the troops had to be rescued by the US Navy.

After ten months with the Sixth Army, Nick and the rest of the men were told that an invasion of the Japanese mainland was on hold. The reason being that the atomic bombs were about to be dropped on Hiroshima and Nagasaki.

When Nick was finally discharged, he was so eager to get home that he didn’t even pick up the medals that he was awarded for his service. He had been due to receive the American Campaign Medal, the Asiatic-Pacific Campaign Medal along with two bronze stars, as well as the World War Two Victory Medal and the Philippine Liberation Ribbon along with one bronze star.

It was finally in 2003 that Nick received his medals after his daughter lobbied the US authorities to issue them.

Nick originally joined the US Army in 1941 and after training was shipped to the Pacific. He had two weeks leave which he spent in Australia, which turned out to be a month after their ship broke down.

He recalls leaving America and watching San Francisco’s Golden Gate Bridge fade into the distance, and he wondered if he would ever see it again. However, says that he was glad to get to see the world and seeing places that he would never have got to see otherwise.