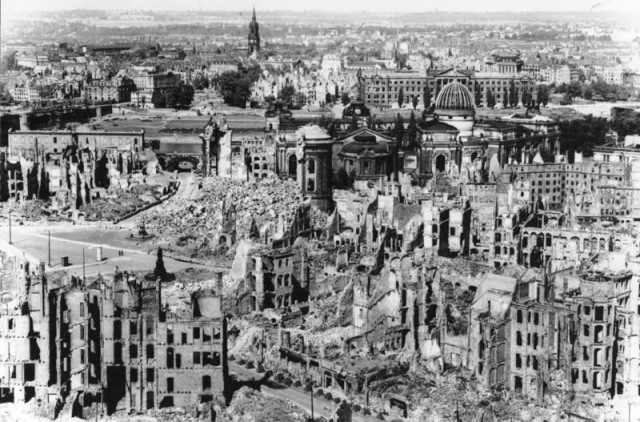 Dresden is a city located in eastern Germany that recently paid its respects to the thousands of people who were victims of the Allied firebombing attack in February 1945. An astounding 13,000 people gathered on both sides of Dresden’s Elbe River on February 13 to link arms in solidarity. The demonstration was a sign of peace and intended to remember the thousands of victims who died during the  Allied firebombing attack, over seventy years ago. This year’s commemoration was a sign of respect to the dead. There was an impressive turnout, albeit amidst right wing demonstrators whose message contrary to  the city’s message of peace and tolerance.

The firebomb attack was provoked by the fact that Dresden was a city that was a strong sympathizer and supporter of Nazi initiatives. This ceremony was intended to remind current citizens of the pro-Nazi sentiments that precipitated Dresden’s attack. Dresden Mayor Dirk Hilbert took this gathering as an opportunity to lay a wreath at the St. Pauli cemetery. Located here are the graves of children of eastern European slave laborers that were essentially murdered by the Nazis.

The mayor made a speech and took the opportunity to remind those assembled to also remember the people who are fleeing war and oppression today. He declared that anyone who closes their heart to those seeking protection from current wars, could not possibly grasp the message and reason for the Dresden memorial gathering. War is omnipresent and in every generation at some point, there is conflict he said.

The Dresden Frauenkirche, also known as Church of Our Lady, invited people to light a candle in memory of all the victims killed in those raids. At 9:45 p.m. local time (2045 UTC) the church bells chimed, indicating the exact time of the first attack 71 years prior.

From February 13 to February 15, 1945, the British and United States air forces conducted four raids that dropped more than 3,900 tons of explosives onto the city. This had been the city once referred to as the “Florence of the Elbe.” The bombing wreaked havoc of epic proportions, eventually creating a firestorm. This is a phenomenon that occurs when a fire reaches such a level of intensity that it sucks all the oxygen out of the surrounding area. People in the area that weren’t killed in the initial blasts or actual fire likely suffocated.

The exact number of casualties has never been confirmed, but it is estimated that somewhere between 22,000 and 25,000 people were killed during that series of bombings, most of them innocent civilians. Depending on who you ask, there are many that felt these attacks were unjustified and unnecessary indiscriminate acts of violence against civilians.

Historians and writers such as Gunter Grass took their analysis one step further, labeling the action as a war crime. The Allies felt at the time  that the raid was justified to  halt German military production and that the city was a key transport hub for the German army.

On the day prior to these commemorations, 550-650 right wing demonstrators engaged in a march through the southeast of Dresden. In response, more than 300 people showed up in opposition to this march. An additional 300 members of the right-leaning Alternative for Germany (AFD) party held their own rally at the city’s Old Market Square, where they were confronted by 20 counterdemonstrators. One of these demonstrator attempted to destroy one of the wreaths that was laid down by an AFD member. This caused a scuffle to occur, according to Dresden police.

The thousands who gathered to commemorate the 1945 victims were also there to demonstrate unity against the right wing populist movement PEGIDA (Patriotic Europeans against the Islamization of the West). There has been a growing right wing sentiment in the area due to the xenophobic movement, which has been rallying in the city on most Monday evenings since October 2014 with hopes of spreading these ignorant mentalities.

But the human chain of thousands pushed back against this mounting sentiment. Saxony state premier Stanislaw Tillich expressed how the chain takes a strong stance in exact opposition to the message of the most extreme. It shows Dresden is an open-minded, accepting, and peace-loving city. Dresden has clearly been changed forever by that terrible night in February 1945.