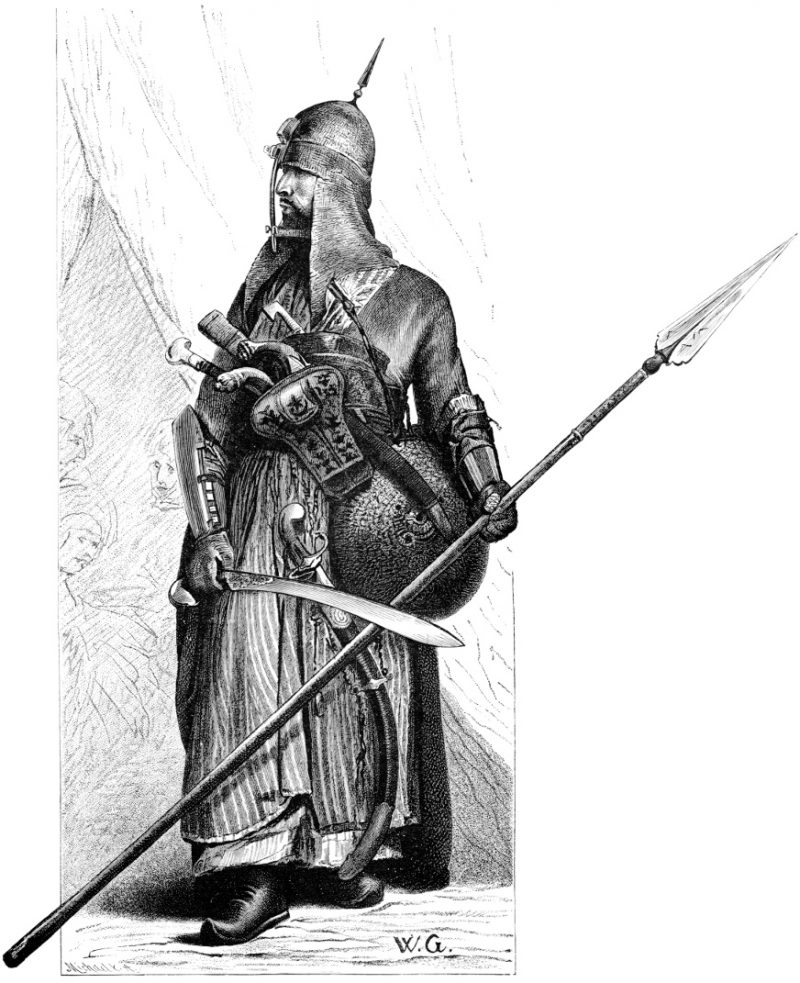 A Memluk Warrior of the Crusading Period

Much like today, the Middle East in the mid thirteenth century was a swirling maelstrom of competing powers, ideologies, and personalities. To the north, in Anatolia, the ancient power of the Byzantine Empire was still reeling from the Fourth Crusade of 1204, which under Venetian leadership had attacked and captured the Christian capital of Constantinople and established the short lived Latin Empire at the bridge between Europe and Asia. The Byzantine states that sprung up in its wake were now not only concerned with fending off the ever encroaching Turks of the Sultanate of Rum, but also in recapturing the city which was their spiritual, commercial, and political heart.

To the south, the relatively recent Ayyubid Sultanate was beset by civil war following the disappointing reigns of Saladin’s heirs, and the remnants of the Crusader Kingdoms, based around the cities of Acre and Tripoli along the Levant coast, were holding out hope that they could somehow take advantage of the confusion and regain some ground from the Muslim powers. Their focus, the holy city of Jerusalem, had been held for about ten years by the representatives of the Holy Roman Emperor Frederick II, who had stunningly persuaded the Ayyubid Sultan al-Kamil to share the city amongst both the Christians and Muslims under his benevolent authority.

All of these squabbles took place, meanwhile, under the growing shadow from the far east, where the Mongol forces of Genghis Khan’s descendants had already burst forth from the steppes and begun raiding as far west as Poland and Hungary and as close by as the Abbasid Caliphate of Mesopotamia (Iraq) and Persia (Iran). No nation or army yet had been able to stop them, and as is always the case with the appearance of waves of invaders, floods of people sought refuge from their incursions as a result.

One such group was the Khwarazimians, a nomadic people from what is today Afghanistan, Uzbekistan, and Turkmenistan. Pushed west by the Mongol horde, a very large group of their horsemen offered their services to the Ayyubid Sultan al-Salih, the son of al-Kamil. Impressed with stories of the Khwarazimian’s prowess – they were said to ride like Mongols and kill like Turks – al-Salih set them upon his enemies.

The truce agreed with Frederick II having run out and the emperor himself long since gone home, the Khwarazimians promptly sacked Jerusalem and massacred any inhabitants they did not enslave. Priests were murdered on altars, and the holy places, Christian and Muslim, were debased. 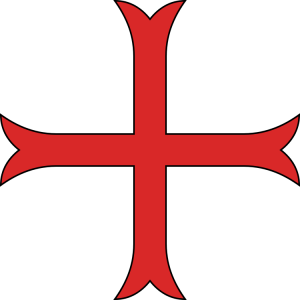 The red cross of the Knight Templar.

Immediately, the forces of the Kingdom of Jerusalem vowed revenge, and they were joined by Ayyubid emirs who were both opposed to Sultan al-Salih’s rule and outraged at the behavior of his “clients”. Along with the entire strength of the Crusader States, the Knights Templar, Knights Hospitaller, and the Teutonic Knights, the emirs of Damascus, Homs, and Kerak came together to face the Sultan and his elite Bahri Memluks, a new force, trained from boys captured into slavery from all around the Mediterranean and Black Sea regions and indoctrinated to be utterly devoted to both their Sultan and Islamic faith. The Khwarazimians rode out with them to face the Crusaders and rebel Ayyubids.

The two forces met outside the village of Harbiyah in southern Palestine, which was known to the Latins as La Forbie. The Crusaders, under the command of Walter of Brienne, were for once in nearly superior numbers, and Walter elected to give battle, despite the advice of his Arab allies. The Khwarazimians, they argued, were not a disciplined force and would eventually withdraw or disintegrate when it was clear that there would be no loot to be gained. The Latin leaders were unmoved, and the armies lined out.

The Crusader force was heavily armed and confident. The abilities and martial prowess of the Knight Templar were well known, but the Hospitallers and Teutonic were arguably as proficient in battle and Walter also had thousands of crossbowmen and infantry at his command. For his part, however, Sultan al-Salih had his Bahri Memluks, who were just as well armed (if not as heavy) as the Christian Orders and as devoted to their cause. By the standards of the day, the battle was a massive affair, with perhaps as many as 20,000-30,000 combatants involved. 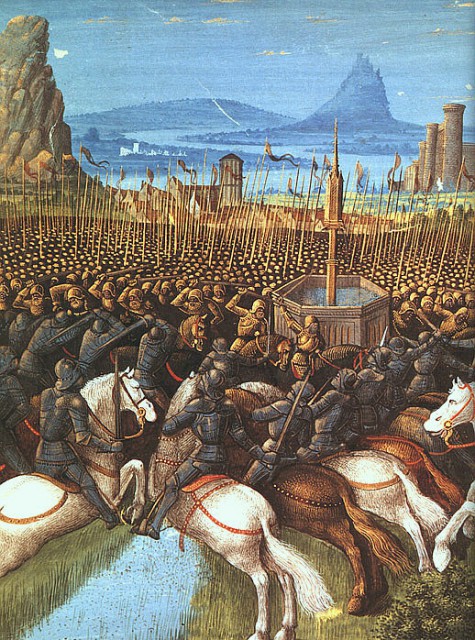 Though the battle depicted is the earlier clash at Hattin, this image gives some idea of the confusion that must have reigned during large battles of the time.

The Christian Orders opened the fighting on the first day of the battle, October 17th. They charged the Sultan’s lines, but the Memluk center held, and the Crusaders were forced to regroup. All of the usual weapons of high medieval warfare were deployed, from archers and crossbowmen, to armored cavalry, knights wielding lances, broadswords, mace, and battle axes. The Memluks would have been armed in a broadly similar fashion, but would have deployed their forces with javelins, scimitars, and the Circassian kama, a slashing weapon imported from the Caucasus where many of their numbers originally hailed from.

Unusually, the battle stretched into a second day, and this was when the killing blow was landed. The Crusaders had lined up with the Bedouins of Kerak on their extreme left, the Damascene forces closer to their center, and then the Christian Orders on their right. At the start of the battle, the Khwarazimians, on the Sultan’s left wing, suddenly charged and made for the Christian lines. The Templars, Hospitallers, and Teutons girded themselves for the impact, but at the last second the Khwarazimians suddenly wheeled to their right and made for the startled Damascene forces.

They punched a hole right through their line and then scattered the Kerak Bedouins beyond. The Ayyubid rebels fled the field, and their Christian allies could only watch in dismay. When it became apparent that they must fight or be destroyed, the Orders moved forward once more and charged the Memluk line. The result was another stalemate, but by this stage, the Khwarazimians had turned yet again and were now falling upon the Latin flanks and rear, overwhelming the infantry posted there as protection and slicing the cavalry’s vulnerable area.

The defeat was a disaster for the Crusading movement. In the words of historian Jonathan Phillips, “the fighting strength of the Kingdom of Jerusalem was all but erased.” From the nearly seven hundred Templars and Hospitallers on the field, the cream of the Crusader military, barely sixty survived. Three Teutonic Knights survived from a force of four hundred. The Ayyubid dynasty, now ruling both Egypt and Syria, was clearly in the ascendant, but the real winners of the day were the Bahri Memluks. Having contained the best that the western forces could throw at them, they would very shortly seize power for themselves and still be ruling Egypt some six centuries later. The dream of the Crusading movement, only one hundred and fifty years old, was ended in the fields outside the town they called La Forbie.