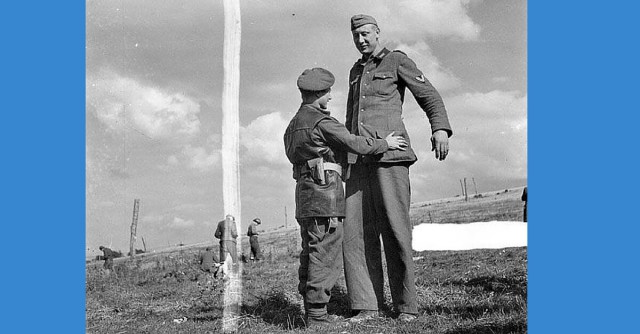 The World War Two story of David and Goliath – an Allied 5ft 3in soldier who captured Germany’s tallest soldier at 7ft 6in has been uncovered.

Bob Roberts, who was photographed when Jakob Nacken was captured, has been awarded France’s highest military honour, the Legion d’Honneur, by the French Government.

Bob recalls how it was a true David and Goliath moment and is one of 3,000 Allied veterans to be honored with the Legion d’Honneur by the French Government 70 years after the war ended, as their stories of heroism have emerged years later.

Bob is now 92 and is a great-grandfather, during the war he was a Corporal serving with the British Army in France. He says that there were many times when he was almost killed but he was lucky enough to scrape through with his own life.

Bob lost his younger brother Ernie during the war, who had just been entered service a few days before being shot and killed.

Bob recalls the time when his division came across Jacob and said that a huge giant came over to him to be searched as they were now prisoners of war. When the two men came face to face everyone had to laugh and Bob’s division caught it on camera.

Bob’s Legion d’Honneur medal was sent to him in the post without ceremony and arrived this week. It was Bob’s daughter who had applied for the medal on behalf of her father.

Bob said he was surprised by the honour and says he felt lucky and privileged to be given it.

Bob, who now lives in Bournemouth in Dorset, actually grew up in Canada and joined the army in 1942. He was deployed to England for training and was one of the first troops to land in France during the D-Day landings. Bob went on to fight in Belgium and Holland, but was hit by shrapnel in February 1945 in the final months of the war and was sent back to England for medical treatment.

Bob stayed in England where he married his war time sweetheart and they went on to have four children, The Telegraph reports.

One historian is now pushing French authorities to have an awards ceremony at the French Embassy in London so that Bob can be suitably honoured for his actions during the war.