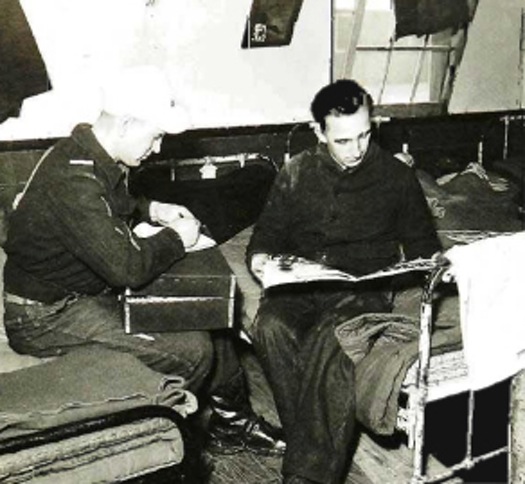 The story of two World War Two German Prisoners of War escaping in Minnesota has been uncovered more than 70 years later.

Prison camps had been established across the US to house German and Axis prisoners of war during World War Two. In Minnesota a prison work camp had been established as a lumber camp on the banks of Lake Winnibigoshish, holding just over 200 prisoners. The camp was linked to other prison facilities in Owatonna, Faribault and Fairmont and was not a high security camp, it was only lightly secured.

The prison work camps acted as a way for the US to counteract the lack of native workers who had been drafted into military service.

It was during the night of Sunday, 29th October 1944, when a regular evening bed check was being conducted, that prison guards realized two German prisoners were missing.

German prisoners Corporal Heinz Schymalla, 22, and Walter Mai, 21 had escaped and would keep guards and local police searching for them for five days.

In the prison, Heinz and Walter earned around 80 US cents a day to spend in the prison canteen in lieu of chopping and sawing the wood from surrounding woodland. It was when Heinz received a letter from his family telling him that his elderly father had been drafted to serve the Third Reich because the number of young recruits was dwindling.

Heinz felt that he had to get back to Germany and connived with Walter to come up with an escape plan, so that they could once again fight for their country. They planned to head to the waterways and paddle all the way down to New Orleans where they hoped they would be able to find Nazi sympathizers and a way to get back to Germany.

In a note left by Walter underneath his prison bunk mattress, he wrote: “Our fatherland, our homeland are now in a very difficult position and needs all available sons”.

The two prisoners had originally been captured by Allied forces in 1943 in North Africa, a year later they had made their escape from the prison camp stocked with extra clothing they had found in the prison grounds, along with extra rations of bread and meat.

The pair used a small map to work out that the lake they were stationed at was connected to the Mississippi River and could take them all the way to New Orleans where many ships would come into port. One of which they hoped would be of a neutral country that they could get a ride with.

The pair used scrap wood that had been carved into a boat shape and made their escape attempt. Authorities chased them and finally caught up with them around 12 miles down the river, the StarTribune reports.

They were sentenced to a month in solitary confinement and two weeks with just bread and water rations.