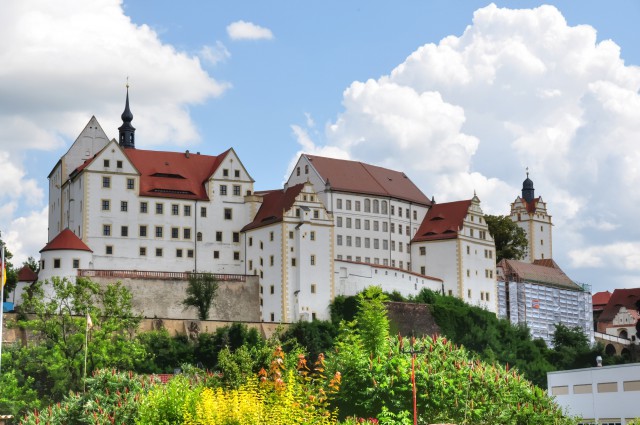 The infamous Colditz Castle [Via]

The escape from Colditz Castle in Germany during World War Two was made famous in the movie, The Colditz Story in 1955.

Today, Colditz Castle still remains standing in eastern Germany near Leipzig. The castle is open to the public and makes an perfect educational visit for those looking to learn more about the prison during the war.

Colditz was transformed into a prisoner of war camp during the war and was renamed Oflag IV-C. Hundreds of Allied prisoners were held at the castle, which was thought of by the Nazis as a special prison that was supposed to be completely inescapable.

Given its location high above the nearby village of Colditz, the Germans put all of its worst or repeat escapers at the castle. The prison was run by the  Wehrmacht (German army), while a group of SS and Gestapo officer also operated at the prison in order to conduct interrogations.

Approaching the castle, it looms over the village at 10 stories high, and already high up on a huge hill made of rock. A museum has been established at the foot of the castle, detailing its role during the war and around 30,000 people visit every year.

The castle stands around a small courtyard which was used for prisoners to exercise in. However, during the war, the Red Cross told the Germans that it was not big enough for exercise and they had to allow prisoners to also exercise in a nearby field.

The castle has three meter high walls and was relatively isolated, which made it almost impossible to get away to safety even if prisoners got out of the castle. While German engineers stated that the castle was solid and excellent for a prison, in fact the castle walls were porous and it had numerous back passages and secret tunnels that the prisoners could investigate for possible escape routes.

With a highly motivated prison population, made up of the German’s most notorious POW escapers, there were around 300 escape attempts from the castle. Over half of those attempts were successful but many escapees were recaptured. Only 31 escapees made it out and over the border to safety in Switzerland.

The actual castle’s origins go back to around the 11th Century AD. A fortress was later built on the site in around the 15th Century, and was later used by wealthy local families for hunting and weekend trips. In the early 1900s it was turned into a psychiatric hospital, until the Nazi party came to power. In the 1930s they converted it into a prison to hold their political opponents, and then once the war began they started to hold prisoners of war at the castle, the nzherald.co.nz reports.

Colditz was liberated by the Allies in April of 1945.