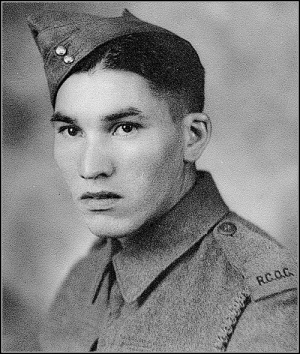 The language of Cree has been revealed to have been used during World War Two by Cree code talkers.

Code talkers were people employed by the Allies from various backgrounds and cultures to talk in their native language in order to communication secret messages so that the Nazis or Japanese could not decipher them.

The most famous code talkers were Navajo Indians, but the Canadian language of Cree was also used and now a new documentary is going to tell the story of the Cree code talkers.

The documentary is going to be based around Cree talker Charles ‘Checker’ Tomkins who joined the Canadian Army during World War Two and was sent to serve in Europe. Tomkins took part in many top secret missions that he never talked about even after the war ended.

Tomkins’ own family did not know what he did during the war, and even his brothers say that his brother honoured the secrecy and never told a sole.

The documentary’s director, Alexandra Lazarowich is telling Tomkins’ story in the short 10 minute film. She says that the story is important and is a way of honouring and recognizing Canada’s aboriginal population’s role and contribution during World War Two.

The story of the Navajo code talkers was made into a Hollywood film in 2002 called Windtalkers, the CBC News reports.

The Cree talkers were from Alberta and Saskatchewan in Canada and Lazarowich has journeyed to those areas to talk to locals about their role during the war. Tomkins’ brother, Frank was one of those interviewed as Tomkins sadly died in 2003 at the age of 85.

The Tomkins family were from Grouard, Alberta and Frank says that the Cree code talkers would mainly communicate sets of numbers. The numbers would often refer to incoming attacks such as numbers of enemy bomber aircraft, troops or vehicles. The talkers would use Cree words to give descriptions as well, such as sakimes for mosquito if they were talking about mosquito bombers.

Lazarowich hopes that he documentary brings the role of the Cree code talkers to life and even hopes that the Canadian government may one day formally recognise their role in the war. She says that her ideal outcome is for Tomkins’ to posthumously receive the Canadian Congressional Medal, following the lead of the US government which honoured all of its code talkers for their role during World War Two.