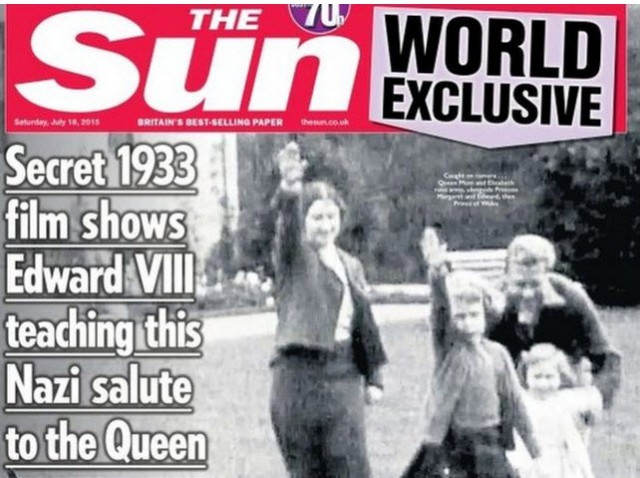 This month the British royal family came under scrutiny for an 80 year old royal photograph that was uncovered showing the royals mimicking Hitler’s Nazi salute in the garden of one of the royal palaces.

The photo showed the current Queen Elizabeth as a child with her sister, Margaret, her mother and uncle. A tabloid newspaper in the UK acquired the photograph and released the photograph on its front page in an effort to discredit the royal family.

The stunt backfired as the British public turned against the newspaper and floods of dismay and anger against the news outlet for publishing the photograph have been pouring in to the royals.

At the time in the early 1930s, no one was to know what the Nazi salute would come to symbolise. Also as a child of just seven years old, the Queen herself would not have understood the salute for what it stood for.

Hitler had just come to power in 1933 and records show that many more politicians and officials made far worse mistakes in the years running up to the war than the photograph of the royal family.

In 1936, former British Prime Minister David Lloyd George had been on a trip to Germany after Hitler had taken back the Rhineland region breaking post-World War One international agreements. On his return Lloyd George said that Hitler was a leader, had a dynamic personality and a heart. He even went on to refer to Hitler as the Germany’s equivalent of George Washington.

Another leading figure to make an error was the then editor of The Times, Geoffrey Dawson. He was positive towards the German leader in the 1930s and is said to have edited out any comments that would hurt the Nazi cause and add points that might help them. The newspaper soon changed its stance towards the Nazis when the war broke out in 1939, The Telegraph reports.

It is evident that many leading figures were sympathetic to Hitler and his cause in the years since he took power before the war began. Even Winston Churchill said that he would admire such a figure as Hitler to bring a country back from the brink of defeat as he had done with the Germans.

It is well-documented that the Queen’s uncle, Edward, did have sympathies with Hitler and the Nazi regime. But the photograph only shows a family playing around in their own time, mocking the German salute.