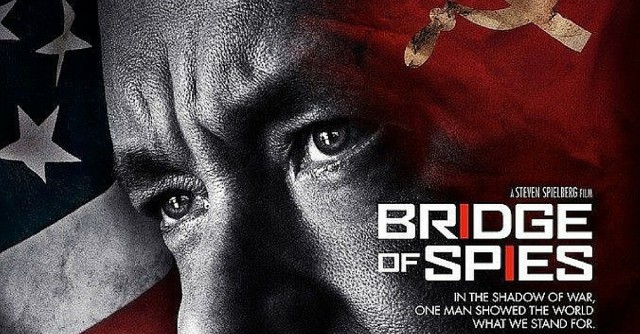 A new Steven Spielberg film always attracts a lot of attention, and his newest offering is no exception.
Based on true events, the film deals with the remarkable story of Rudolf Abel, a Soviet intelligence officer who was convicted in 1957 for conspiring to send US military secrets to Russia. Abel was born in Northumberland, England. His father, who was a friend of Lenin, went to Newcastle in 1901 and spent many years attempting to indoctrinate British factory workers. Father and son later returned to Russia where Abel joined the Soviet intelligence agency.

In 1948, Abel entered the United States illegally, living in New York under a false name. He installed radio transmitting equipment in his apartment. He was arrested in 1957 and was subsequently sentenced to thirty years in prison for espionage.

Bridge of Spies portrays the events surrounding Abel’s trial and his subsequent exchange for Gary Powers, an American U2 spy plane pilot who was shot down and captured by the Russians in May of 1960. Powers was flying a photographic intelligence mission over Russian military targets. The mission took place just fifteen days before an East-West summit conference in Paris and the capture of Powers was an embarrassment. America initially tried to cover up the incident, but it was revealed to the world by Nikita Kruschev, the Russian president. Powers was sentenced to a 10-year imprisonment in Russia.

Tom Hanks stars as James B. Donovan, the insurance lawyer who agreed to represent Rudolf Abel at his trial, and later negotiated his exchange for Gary Powers, who is played by Austin Stowell. Mark Rylance plays the part of Rudolf Abel, The Breeze reports.

James B. Donovan agreed to represent Abel after several other prominent lawyers had refused, and he paid a heavy price. He was abused in the street and his family was plagued with late-night threatening phone calls. Demonstrators picketed outside his house. The American public wanted to see Abel executed, but Donovan maintained that he was worth more to the nation alive – he knew that Abel may one day be of value for an exchange deal with the Russians.

In 1960, the chance came when Donovan was approached by the CIA and asked if he could negotiate to exchange Abel for Gary Powers. The negotiation was successfully concluded in May, 1962 when Powers walked to freedom by crossing a bridge from East to West Berlin.
Bridge of Spies premiered on the 4th of October.