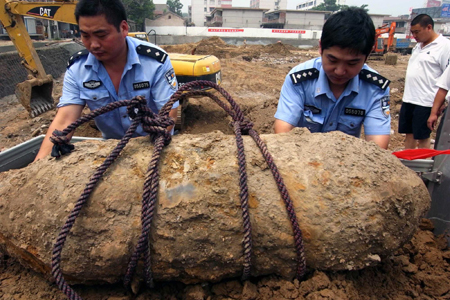 January 7th, 2014, Hong Kong authorities spent 17 hours trying to dismantle a bomb that was discovered in the downtown area. The bomb was left over from when the American army bombarded facilities in Japan during the Second World War. A military equipment expert explained that the weapons from WWII can still do long-term damage. This also applies to another war that occurred 70 years ago when the Japanese army who invaded China.

Professor Tan Kaijia, the vice-director of Military Logisitics and Equipment Teaching and Research Department of the University of National Defense of the People’s Liberation Army, was interviewed by a reported from Xinhua News Agency. He has analyzed the impact of unexploded bombs can do to a contemporary world.

In technological terms, the bomb that was discovered in Hong Kong on January 6th was extremely powerful. During the later stages of WWII, the TNT explosive in American army’s bombs were both heavy and high grade. According to the report, the bomb had two live fuses which were produced almost 70 years ago. This news indicates that the workmanship and the quality of the munitions was exemplary during that time.

Well, a question remains: “Why didn’t the bomb explode when it hit the target?” Bombs that were built during that time were detonated by fuses, whereas modern bombs are detonated by an automatic trigger. It is Tan Kaijia’s opinion that this bomb remain unexploded for such a long time because it landed on loose and soft ground and the fuse wasn’t ignited—or it simply suffered a breakdown. This means that there could be numerous unexploded bombs all over the world.

Tan Kaijia told People Daily that these unexploded bombs can be a threat to people for years to come. It is almost 70 years since the end of the Second World War, and the bombs still pose a threat to the population.

The Japanese army that invaded Hong Kong during those years committed horrific war crimes. In order to rescue Hong Kong, the American army supported China’s anti-Japanese struggles. This historic fact reflected by the bomb serves as a reminder that the Japanese invaded Eastern Asia countries, which includes mainland China and Hong Kong.

“The damage that war causes to the people involved is enormous and long-term. Only one conventional bomb has been discovered on this occasion. However, the Japanese army invaded many places in China and left behind many chemical weapons. Those weapons can have pose a much greater future threat to Chinese people,” said Tan Kaijia.