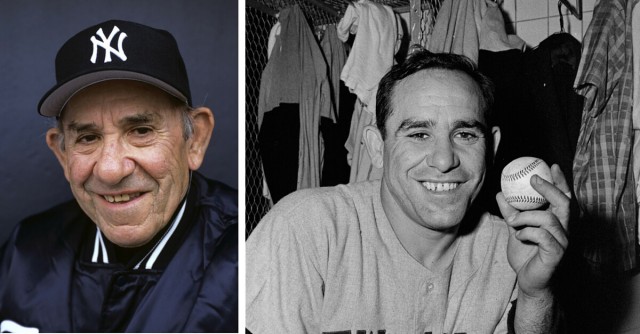 A New York Yankees Legend Lawrence ‘Yogi’ Berra, well known for his quirky sayings known as ‘Yogiisms’, has passed away on Tuesday peacefully at his residence in Montclair, New Jersey. Although Berra spent most of his 90 years of life submerged in baseball, but his role in the Second World War is no less legendary and epic.

From a very early age, Lawrence ‘Yogi’ Berra saw himself as a professional baseball player and at a tender age of 18 his prospects were pretty high with a Yankee affiliate in Coastal Virginia named ‘Norfolk Tars’. Despite being 5-foot-8 Berra quickly made himself prominent among his peers. Then the Second World War erupted and everything changed for Berra.

Berra quickly realized that his nation needed him; he instantly put his promising baseball career on hold and went to enlist in the US Navy. His initial deployment was as a ‘gunner’s mate’. It sure does sound exciting but for an agile and athletic Berra it was a boring job, he wanted more combat, more involvement. Therefore when an opportunity came to go on an amphibious ship, Berra did not waste a second and put himself forward without entirely knowing what it really meant. What Berra did not realize was that the ‘rocket boat’ he was going to be a member of was preparing for one of the most ambitious battle of the Second World War i.e. the D-Day invasion of Normandy, The Washington Post reports.

Being an avid baseball enthusiast and athlete, Berra loved the fact that his rocket boat could fire rockets, very far and very fast. In one of his interviews he dubbed the boat ‘that 36-footer’.  Berra also loved the fact that the ship he was on board was among the very first Allied war machines that attacked the Normandy beaches, way ahead of any ground troops. He also added that he was not really scared or frightened, and that for him the Normandy invasion was just like 4th of July fireworks that he immensely enjoyed.

Professional athletes from all segments of sports including NHL, and NBL (predecessor of NBA) have been serving in the military since the World Wars up until very recently. The last major batch of players served in the Vietnam War, and only one professional sportsman served in Afghanistan. Pat Tillman, an Arizona Cardinals football star, joined Army Rangers and was deployed in Afghanistan; he was killed in a friendly fire incident which was extensively reported in the media.