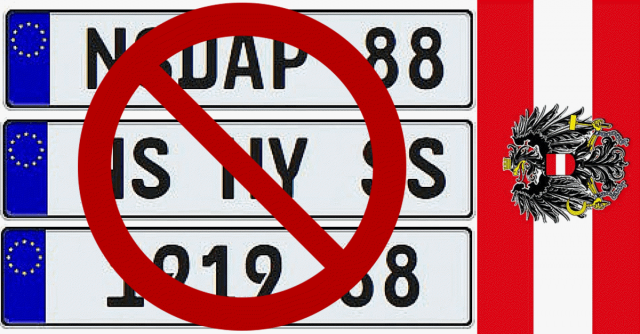 Usually number plates for cars in Austria are generated automatically by authorities in each region. But just like anywhere else some drivers prefer to request unique sets of numbers and letters or have their own versions made up.

Now Austrian authorities have come up against a new problem where neo-Nazi supporters have begun to personalise their number plates with neo-Nazi messages and symbolism creating offensive number plates. Authorities are now moving to have the right wing number plates and their future manufacture banned so that they are unable to be attached to cars.

Many neo-Nazis opt for initials standing for pro-Nazi groups or those in existence during the war such as HY for Hitler Youth, NS for National Socialism, and 88 for Heil Hitler. Transport departments have collated a list of over 30 letter and number combinations which are being used by neo-Nazis. Authorities are now banning the entire list so that they cannot be used.

The legislation was brought before the Austrian parliament and was voted into law this week. It is not only aimed at neo-Nazi symbolism but also other extremist symbolism from supporters of groups such as IS and ISIS.

Austria’s transport department released an official statement stating that many Nazi symbols were already banned at the end of the Cold War in 1989. However, now new and emerging neo-Nazi and other extremist symbolism has come into use and must be banned so that it does not spread support for the groups.

Some other hidden combinations that are being used by right wing groups include BH for blood and honor, 420 for Hitler’s birthday which was on 20/4, 1919 which stands for the 19th letter of the alphabet – SS which was the Nazi’s branch that managed the concentration camps, and WAW which stands for white aryan war.

The list of the combinations was put together with the help of the Mauthausen Committee, which is an organisation made up of previous prisoners of the Nazi concentration camps during the war, the BBC News reports.

Politicians and the Austrian Parliament is keen to get across that message that right wing ideology is not welcomed in Austrian society. Germany also has similar legislation to curb the use of offensive number and letter combinations on number plates.