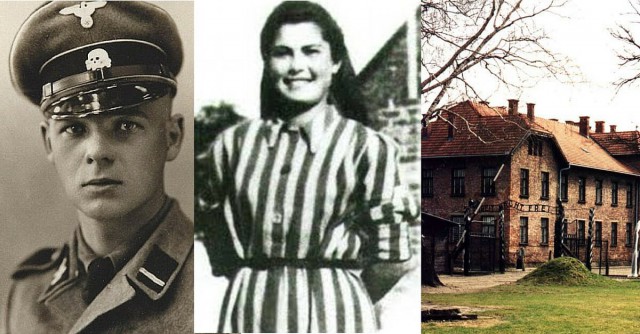 An Auschwitz love story has emerged more than 70 years on from the depths of a Nazi concentration camp, where a Jewish prisoner fell in love with one of the SS guards at the camp, saving her and her family’s lives.

Helena Citronova was imprisoned at Auschwitz along with her sister, Rozinka. It was SS Guard Franz Wunsch who Helena had an affair with. She admits that she slept with him, and as time went on she even admits to having deeper feelings for him. She even says there were times when they were together when she forgot where they were and who he was.

The relationship was formed as Helena wanted to try anyway possible to keep herself and her sister alive in the death camp.

Originally from Slovakia, Helena was forced to work at the camp where she had to help sort all of the incoming prisoners’ belongings. The moment that saved her life was when Helena had to sing during Wunsch’s birthday celebrations and he first noticed her. Earlier that very day she had been sentenced to death, but after singing for him, he stopped that from happening. Later, he dropped a note into the warehouse where she was working saying ‘I fell in love with you’.

Helena thought that she would rather die than be involved with a Nazi, and for a long time after their affair started she couldn’t bring herself to look him in the face. But over time she came to terms with the romance.

Wunsch would provide Helena with food and when she learned that her sister and her sister’s children were due to be sent to the gas chamber, he stepped in and got Rozinka out after telling guards she worked for him in the warehouse. But there was no way he could save her children as children did not live at the camp.

The love story was brought to life in a television programme broadcast by PBS in America, as well as an Israeli programme in 2003. During the making of the programmes she said that she felt there was a stain on her for having a relationship with a Nazi soldier, but at the end of the day he saved her life, the Mail Online reports.

After the war in the early 1970s, Wunsch was put on trial in Vienna and was accused of being violent to prisoners and had worked at the gas chambers to insert the lethal gas. His relationship with Helena was raised and she even testified for him. He claimed that his relationship with Helena changed his perspective on life because of her. There was more than enough evidence for a guilty verdict in the participation of mass murder, but Wunsch was acquitted due to war crimes having a limited timeframe from which they can be prosecuted in Austria.