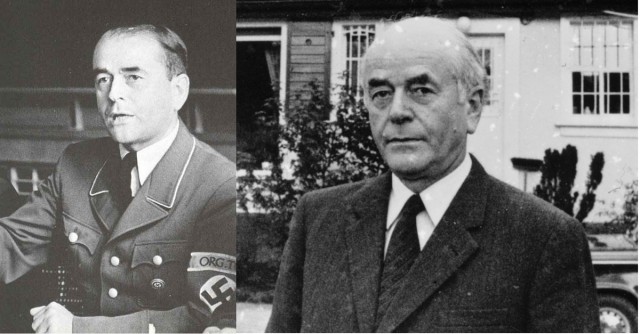 After seeing Hitler speak at his university when he was just 25 years old, Albert Speer decided to join the Nazi Party in 1931. Speer stayed with the Nazis and made his way up the party’s political career ladder right to the top. He was one of the Third Reich’s most powerful leaders and became one of Hitler’s closest allies.

Speer was Hitler’s main architect and was responsible for a number of high-profile events and projects, including a famous rally at Nuremberg and the rebuilding of Berlin after the Jews were deported to concentration camps.

He went on to become the Nazi Minister for Armaments and was responsible for ensuring that the necessary supply of munitions and weapons was amassed and delivered to the front line to keep the German war machine in progress.

Speer shone in this role and achieved high increases in manual labour and machinery productivity, as well as technical advancement. He was able to continue working closely with Hitler due to his excellent work.

Speer survived the war and was charged with war crimes alongside other Nazi officers at Nuremberg. Yet he was the one Nazi, who came out of the trial with a good public image. Speer denounced the Nazis but admitted responsibility for what he did for the Nazi party during the war. He claimed to have distanced himself from the infamous leader and other criminals in the party.

During the trial, the Allies came to believe that Speer was different from the other leaders. He remained calm and convincing throughout and claimed that he was simply a professional man from a middle-class background.

One of the most significant findings of the trial was the judges’ acceptance of his claim that he knew nothing of the Nazi death camps or the Holocaust.

Speer’s life was saved due to his testimony that he had planned to kill Hitler in the final months of the war by filling Hitler’s bunker with poisonous gas. He also stated that he had a part of the famous Operation Valkyrie assassination attempt.

When it became apparent that World War Two was coming to an end, Speer said that he was one of the only officers close to Hitler who tried to convince the Nazi leader that it was all over for the Germans. Hitler had implemented his ‘scorched earth’ policy whereby anything and everything should be destroyed in the Nazi army’s retreat.

Speer ignored these orders and helped to save lives and stop important buildings and thoroughfares from being destroyed.

After the trial, Speer was jailed for 20 years, but he was not sentenced to death because of his reputation as “the good Nazi”. However, a new book contests this commonly held view of Speer and suggests that he was implicit in some of the Nazis’ worst war crimes, including the Holocaust.

There are also indications that Speer profited personally from his war experiences through embezzlement of funds, charging exorbitant fees for his building projects, and the seizing of personal property belonging to the Jewish families who were victims of the Nazi regime in which he played a large part.