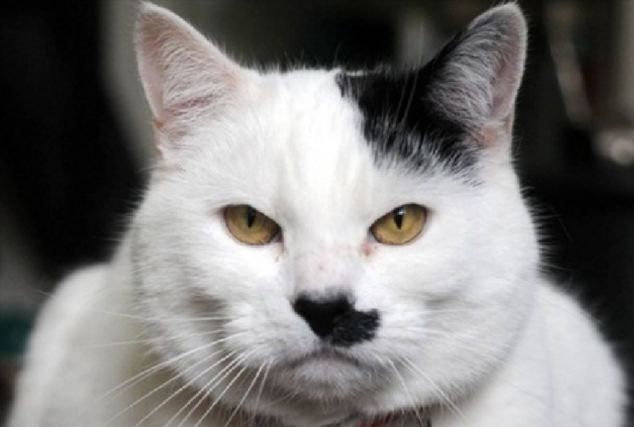 Hitler is perhaps the only historic figure and certainly the only tyrant who never gets tired of his resurrection in modern objects. There is certainly no shortage of big and small cats that bear uncanny resemblance to the ‘Fuhrer’. But a ‘Hitler cat’ in Moscow has the full package, it not only has the similar features, it also contains the unique characteristics of Hitler including his angry outbursts and tantrum.

The uncanny resemblance with the most ruthless tyrant is almost natural. A Donskoy feline has no hair but does have the infamous Hitler mustache. It also has the distinctive hairline of the tyrant, but as you may have guessed, this is not all the ‘Fuhrer traits’ of the feline.

Most appropriately named ‘Faux Fuhrer’, the cat had a reputation while growing up. According to the owner Elena Suleymanyan, whoever looked at him had to look again due to the resemblance. Some even walked up to her and asked if her cat had any ambitions of the world dominance. At first it was getting a bit annoying, says Elena, but later she started to feel the funny side of it all, The New York Post reports.

Elena Suleymanyan, who is a pharmacist in the Russian Capital Moscow, says that her cat has real temperament issues, more like ‘Hitler-temperament’ issues. Her cat is really fussy about his food, and timing is very critical. He only eats specific kind of food and if the food is not to his liking he goes mental. Hitler had the same temper issues surrounding his meal times and kinds, he had his own specialist cook who he took to his last hiding place at the end of the war, the Fuhrerbunker.

Despite all his Hitler traits, Elena said that her cat is a perfect companion and once she saw beyond his superficial tantrum outbursts and anger issues, she saw a very lovely cat. Elena is adamant that she would never change Faux Fuhrer one bit.

Elena’s beloved cat is not the only proof of Hitler’s resurrection; there are tons of other candidates in line as well;