Flight Officer Donald Field was giving the orders to 6 crewmates, all with their own responsibilities. They needed to work together in the clouds as part of a 650-strong team of aircraft headed for Frankfurt. A for Apple’s payload was intended for the industrial centres of Germany.

It was hoped by inflicting maximum damage on Hitler’s lifelines, the balance could be shifted in favor of the Allies.

Did A for Apple reach its target? Read on to find out. The story behind this famous plane and its occupants is one of extreme heroism and mortal peril. Former paratrooper and history man Bruce Crompton relayed the tale on his ‘Amazing War Stories’ podcast.

He has a personal connection to the bomber’s activities. A surprisingly personal one. Pal Richard Pymar, curator at Halesworth Airfield Memorial Museum, passed Crompton a section of black bakelite. The mystery object had a practical purpose… as a fragment of loo seat from A for Apple!

The instructions for Flight Officer Field and company (regarding the mission, not the convenience) were straightforward, albeit fraught with risk. Get over Frankfurt, open the bay doors, drop the bombs and make for home. Yet the path to war never ran smoothly. As Field was to discover, that was especially true this night.

The Allied planes – forming an arrangement called a “sortie” – encountered Messerschmitts on the approach. As a result, A for Apple sustained a potentially crippling amount of damage.

The attack may only have lasted seconds, but that was enough. For starters, the lights cut out. The crew were enveloped in darkness, flying in formation with their fellows but unable to see properly both inside and out. Metal had embedded itself in 3 of the crew, including the pilot’s hand. The port inner engine was out.

If Field wanted to call for help, he couldn’t. The radio was hit. Maps had to be consulted. How that was going to work in this case was anyone’s guess. Still, Field remained resolute to see the mission through to the end.

They were relieved to find one of the few things that hadn’t been struck were the bombs. It was a short-lived feeling however. Why? Because extensive damage had been done to the hydraulics and cables. Without those, the bay doors technically couldn’t open.

Field and his men needed to prise those doors apart fast, if they were to have any hope of delivering their lethal cargo to the enemy below. When it became clear that wouldn’t be possible, he decided it was time to head home. But this led them into another world of trouble.

The Lancaster wasn’t the nimblest of planes. Attack could come from the sky and the ground, in the form of devastating anti-aircraft rounds. They ran into another Messerschmitt. At this point it must have seemed like the writing was on the wall.

Not for this crew. A for Apple escaped, but the prospect of making it back to England in one piece was getting further and further away. With the English coast finally within range, Field told the men they were to parachute out into Suffolk.

Fate wasn’t done dealing the crew a bad hand. Sgt Robert Crawley’s parachute actually opened inside the plane, though he managed to drop out into open air and to safety. Warrant Officer and rear gunner Richard “Dickie” Smith jumped but appears to have hit A for Apple’s tailplane, never opening his chute. According to Field, writing in a letter to curator Richard Pymar, Smith wasn’t in the correct position to avoid this collision… a tragic mystery. More details are featured on the Amazing War Stories Facebook page.

Click on the image below to listen to the amazing podcast that accompanies this article. 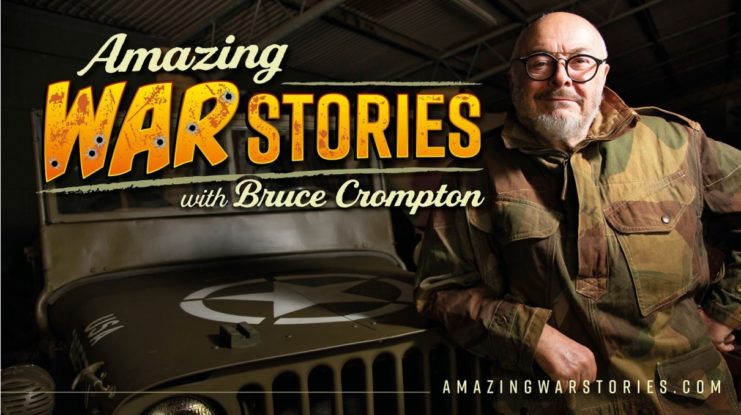 As for Field, after the men bailed he planned taking the Lancaster back across the North Sea and ditch it in the drink. To his alarm, he realized he couldn’t steer the Lancaster in the opposite direction. Below him was the Suffolk town of Halesworth. It looked for a terrifying moment like the plane would go down in a populated area!

It says much about Field’s skill and judgment as a pilot that disaster was avoided. A for Apple met its end in open countryside. The Flight Officer bailed out dangerously close to the ground. The explosion when it came was colossal, and powerful enough to shatter local windows.

In his letter to Pymar, Field talks about seeing the military ambulance approach him: “I was glad to see them, especially the young Air Force doctor”. He reportedly “produced a bottle of Jack Daniels” once the vehicle’s doors were closed.

Another Article From Us: New Documentary Reveals Story of Last German Soldiers to Surrender

For the full story of A for Apple’s death defying mission check out the Amazing War Stories podcast, based on actual accounts and complete with dramatic sound effects. Bruce Crompton’s narration and infectious spirit bring the true legends of war to life…