Photo story (Clockwise from top left): (1) Interior of Goebbels Bunker discovered in December 1997 (2) SS driver’s bunker discover in 1996 (3) WWII Kurt weather station on display at Canadian War Museum, Ottawa (4) Swastika symbol discovered in the Zernikow village forest, north Berlin in 1992 (5) Even after the cutting down of the 25 larches of the forest swastika in 1995, the new larches grew back by the year 2000 to recreate it again (6) In 2006, Japanese guns and grenades discovered from WWII Kokoda Track campaign (7) The rare color photograph of German surrender on 4th May, 1945 (8) Hitler salutes his troops in Germany, 1939 (9) Remains of the WWII carrier pigeon found in 2012

The global warfare fought almost 7 decades ago that caused 61 million deaths for Allied countries and 12 million deaths for Axis countries is still revealing some of its astonishing remnants all around the world. The remains of the unprecedented and devastating war have never truly left us. Former American humor magazine, now humor website Cracked reported on 6 of these mind-boggling recent discoveries.

#6. In the 90s, a bunker for Joseph Goebbels & Adolf Hitler’s bodyguards discovered:

9th November 1989 was a surprising day for all Berliners as the Berlin wall fell. Work began to reconnect all sorts of divided networks between east and west within months. After reconnecting the entire underground infrastructure, a reconstruction boom began. In December 1997, near the planned site of Holocaust memorial in Berlin, construction workers found the WWII bunker built for Nazi propaganda minister and Hitler’s closest accomplice Joseph Goebbels. The bunker somehow managed to survive the fierce Allied munitions onslaught at the end of the WWII. Another bunker for the Chauffeurs of the Schutzstaffel or SS was discovered a year earlier which had Nazi murals on its walls. The rediscoveries climaxed with the discovery of Hitler’s bunker in October, 1999. Before Pink Floyd’s Berlin concert in 1990, the Berlin wall area nick named ‘Death Strip’ for 30 years was swept for mines. During the search workers found another secret bunker that belonged to Hitler’s personal bodyguard division ‘Leibstandarte SS Adolf Hitler or LSSAH’. The bunker was filled with helmets, some weapons and intricate Nazi wall murals.

Between 1945 and 1949, the Soviets tried to level the landmarks of Nazi Germany to prevent the sites developing into Neo-Nazi shrines. They tried to blow up the Hitler’s bunker in December 1947. The separation walls of the bunkers were only damaged. Some of the bunkers were partially flooded. The 1959 East Germany administration also performed demolitions of Nazi landmarks and bunkers, but these sites near the Berlin wall remained neglected.

Finding the underground fortress of Goebbels, one of the strongest advocates of anti-Semitism and Jewish genocide, just underneath the site dedicated to the holocaust memorial was awkward. Goebbels organized oppressive measures and attacks on German Jews since the beginning of his rising to power along with Hitler and Nazi party in 1933. He was one of the masterminds of the mass murder of 5.9 million Jews, 78% of the total 7.3 million Jews population in Nazi occupied Europe. About the 40,000 Jews who were still in Berlin during 1942, Goebbels wrote in his diary that it was best ‘to kill them altogether’. About the deportation of the Jews to the eastern front in Russia he also wrote that ‘60% of them must be liquidated & only 40% can be put to work’. He showed no remorse as he further wrote that a ‘barbaric, but fully deserved’ judgment was being carried out on the Jews.

Goebbels remained in Berlin with Hitler till the end when Nazi defeat was inevitable. Hitler mentioned Goebbels his successor in a will before committing suicide by gunshot on 30th April 1945. Goebbels along with his wife killed their 6 children with cyanide, Geobbels then shot himself and his wife poisoned herself.

Berlin authorities sealed off the Nazi bunkers soon after the discovery as they didn’t want Nazi sympathizers turning it into a shrine. Only a innocuous sign marks the bunker complex today.

#5. Rediscovery of a secret WWII Nazi surveillance post in North America in 1981:

German submarines and U-boats occasionally sank allied ships crossing the North Atlantic Ocean during the WWII. The general idea of WWII being an away game for US and Canada was shattered in 1981 when Canada discovered that the Germans secretly mounted an armed expedition in Newfoundland during WWII. In October 1943, a German U boat crew erected an automatic weather station in Northern region of Labrador, Newfoundland. The Allied weather network stations in Greenland, Iceland and North America gave the Allies accurate weather forecasts and an important advantage than the Germans.

To get more weather information the Germans developed WFL or Wetter-Funkgerat Land weather station manufactured by Siemens. The Newfoundland station was codenamed ‘Kurt’. Depending on the number of battery canisters, the WFL could broadcast weather readings for 2 minutes on 3940 kHz every 3 hours for up to 6 months. The Germans also marked the WFL as property of ‘Canadian Weather Service’. This camouflage fooled every expedition teams that encountered it for almost 40 years.

Franz Selinger, a retired Siemens engineer, learned of the existence of the station in the late 70s while going through the archives to write a history of the company. He contacted the Canadian authorities and they located the Kurt weather station in 1981. It is now on display at Ottawa War Museum, Canada.

The ancient swastika symbol means auspiciousness in Hinduism, Jainism & Buddhism. The swastika is also considered as a good luck symbol. The Nazi party of Germany adopted it as the symbol of the Aryan race. The Nazi had the racialist belief that the Nordic or Germans were the ideal and pure race and represented the original racial stock of prehistoric Bronze Age Indo-Europeans called Proto-Aryans. Since the Nazi atrocities during WWII, the swastika symbol has become associated with Nazism and related concepts like anti-Semitism, violence, hatred, murder and death. In Germany and many western countries the symbol has been outlawed.

A pilot spotted the 200 square feet giant forest swastika created by the contrasting color of the fully turned fall leaves in the Zernikow village, north Berlin in 1992. It was made up of some deciduous larch trees in a coniferous tree forest. 43 larches each about 60 feet high were cut down to eliminate the symbol. It is believed that the trees were planted by a forest ranger in 1938 either out of his Nazi enthusiasm or because he was given orders to do so. The forest officials said that the swastika had been an eyesore and a wound.

The attempt of state authority to eliminate the symbol by cutting selective 43 trees out the total 150 trees that made the yellow and green patterns could not eliminate the Nazi symbol in 1995; because enough larches grew back to recreate the symbol by the year 2000. Then the authorities cut down further 25 trees to eliminate the swastika symbol. On 16th September 2006, New York Times reported on another mirrored image fir tree swastika of about 600 feet across in Eki Naryn, Tash Bashat, Kyrgyzstan. There are many local myths regarding the symbol in Soviet territory. One of the myths is the trees were planted in the late 1930s when Stalin and Hitler signed the Ribbentrop-Molotov treaty of non aggression between USSR and Germany.

Deep in the Jungles of Papua New Guinea, Australian trekker and former army captain Brian Freeman discovered the significant WWII battle field including remains of the Japanese troops just the way they succumbed to death almost 70 years ago. While searching for the WWII maps and diaries, Freeman found documents related to a huge battle in the remote Papua New Guinea region of Eora Creek that resulted in 79 death and 145 wounded for the Australian troops. So he kept searching for the site and upon discovery realized that it had been apparently remained untouched since 1942. The site is found 60 km away from the Kokoda Track, half a mile away from Eora Creek, Central Province, Papua New Guinea. The local Alola people avoided the battlefield due to their fear of dead soldiers’ spirits and more sensibly because of the scattered grenades around the site.

The Kokoda Track campaign was a number of battles fought between Allied forces-predominantly Australian forces and Japanese forces from July to November 1942. The Australian and U.S. forces had 30,000 soldiers and the Japanese had 13,500 soldiers. It resulted in a costly victory for the Allied forces due to the harsh jungle environment. 625 allied soldiers were killed with 1055 wounded and the Japanese lost 6,500 soldiers. Among the discovered things were a line of dropped riffles, spent ammo casings, helmets, canteens, kidney-shaped medical trays, riffle pits, grenades, military boots, remains of soldiers and even a body of a dead soldier leaning against a tree.

#2. Color photograph of the noteworthy moment of 20th century, the German surrender, and other WWII color photos released in 2009:

After Hitler’s death on 30th April, 1945 the Nazi forces began to surrender. German troops in Italy surrendered on 1st May, Berlin troops surrendered on 2nd May and the significant German forces in North West Germany, Netherlands and Denmark surrendered on 4th May 1945. General Eberhard Kinzel and Gereral Admiral Hans von Friedeburg of German forces surrendered unconditionally to British Field Marshal Bernard Montgomery. Though photography was restricted on that occasion, Ronald Playforth, a clerk of the British Field Marshal, took a colored photograph of the occasion from the bushes. The rare color photograph having remained hidden for over 64 years, his family finally decided to sell it to the highest bidder in 2009.

Hitler’s personal photographer Hugo Jaeger also used color films regularly. He buried his photographs near Munich at the end of the war and kept them hidden until 1965 when he sold those to Life Magazine. The color photographs were published on an online gallery in 2009 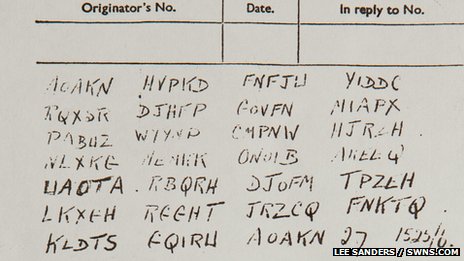 Racing homer pigeons were used during WWI and WWII to carry messages. Nearly a quarter million carrier pigeons made valiant efforts to deliver messages for British forces amidst enemy hawk patrols and pot shooting ground patrols. In UK, 54 Dickin Medals were awarded to 32 pigeons, 3 horses, 18 dogs and a cat between 1943 and 1949 to acknowledge their gallant actions and devotions during WWII.

David and Anne Martin of Surrey discovered the skeleton of a pigeon in their chimney in November, 2012. They discovered a red container attached to one of the legs of the bird before throwing the bones away. Inside it was a WWII era message consisting of 27 handwritten blocks, each block with five letters each. The message baffled the code breakers at GCHQ or Britain’s’ Government Communications Headquarters and termed the codes as ‘unbreakable without the original code books’.

However, in December 2012, a Canadian enthusiast Gordon Young claimed to have partially cracked the code using his great uncle’s WWI code book in less than 20 minutes. Young said the message was sent in 1944 soon after the Allied D-Day landing at Normandy. It was written by a soldier who was dropped behind enemy lines and was confirming German positions. According to Young, the message also confirmed that several units of British and American troops had also finally met up. Young declared that some of the messages read: ‘Hit Jerry’s right, reserve battery here. Electrical engineers headquarters are already known. Troops, batteries, panzers, engineers are here.’ He further added the other fillers had also been used in the message to confuse the Germans or whoever intercepted the letter other than the Allies.